AUSTIN, TEXAS (AP) — Dylan Frittelli (pic below) was the last player to get into the Dell Technologies Championship. He won’t be among the first to leave.

Frittelli won his group on Friday, making him the first No 64 seed to advance to the weekend since the Match Play changed to round-robin group play in 2015.

The South African never felt like a No 64 seed. He played at Texas and delivered the shot that won the NCAA title for the Longhorns in 2012. He now makes Austin his home and knows Austin Country Club as well as anyone.

“I definitely was in a group that was winnable on paper in my mind,” Frittelli said. “I wasn’t going to say I was the favorite in the group, but I said if I got through Tony Finau that would definitely make me the favorite in my mind. And I did that on day one quite convincingly.”

He opened with a 6-and-5 victory over Finau, needed only 16 holes to beat Jason Kokrak and was assured advancing even before his match against Will Zalatoris was over. Jason Kokrak needed to beat Finau to have any chance, and Finau had him dormie through 16 holes on his way to a two-up victory.

Less amazing that Frittelli advancing is how he got into the field. He slipped to No 69 in the world ranking after The Players Championship, meaning he needed five players to withdraw. Tiger Woods and Brooks Koepka are injured. Justin Rose withdrew with back soreness. Adam Scott was never planning to play. Gary Woodland tested positive for the coronavirus, and because of the Wednesday start at Match Play, he didn’t finish his 10 days of self-isolation in time.

Frittelli took it from there, and next plays Tommy Fleetwood of England. 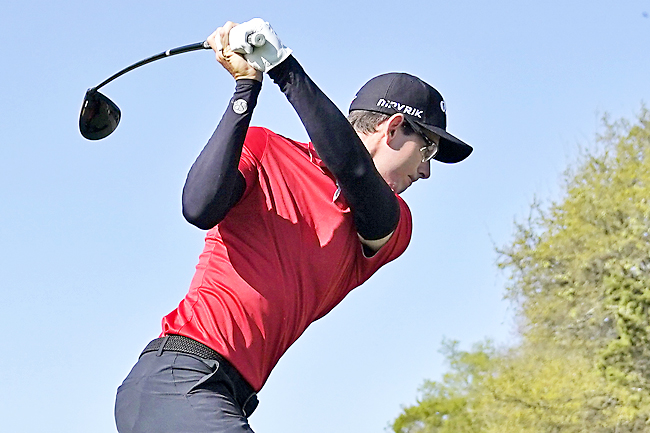 The match Kevin Na won over Dustin Johnson appeared to get a little testy on the par-3 11th hole. Johnson’s eight-foot birdie putt to go two up rimmed out of the cup, settled about five inches away and he knocked it away.

Na stepped in, put his hand on Johnson’s shoulder, and told him he needed to wait for the putt to be conceded.

Even from that length.

“Just, just wait, right. I know it’s this,” Na said, holding his hands a few inches apart. “But you still have to wait until I say it’s all right.”

It sounded like a lecture. Na said he didn’t want that in his head before he faced the three-foot par putt to halve the hole.

“I wasn’t going to say, ‘That’s a penalty, you’re going to lose the hole.’ I was going to say, ‘You know what? That was good, anyway.’ I didn’t want to be over that putt and be thinking about that,” Na said.

Bob MacIntyre did more than just advance to the round of 16 in the Match Play.

He’s headed to the Masters.

This is the final week for players to reach the top 50 in the world to earn a Masters invitation. MacIntyre, the 24-year-old from Scotland, came in at No 44. He is assured of staying in the top 50 and makes his Augusta National debut.

Will Zalatoris, who was on the Korn Ferry Tour when golf returned from the pandemic, didn’t advance but also will stay in the top 50 to get to the Masters.