AMSTERDAM (AFP) – He is one of the leaders of a new-look Netherlands, but as they make their hotly anticipated return to a major tournament the hope is that Frenkie de Jong (pic below, AFP) has enough left in the tank to play a key role at Euro 2020.

The Dutch, last seen at a major tournament at the 2014 World Cup when they came third, kick off their European Championship campaign on tomorrow (3am Brunei Time) when they host Ukraine in Amsterdam.

After failing to qualify for Euro 2016 or the 2018 World Cup, the likes of Robin van Persie, Arjen Robben and Wesley Sneijder have all gone and a new Dutch generation has emerged.

It is embodied by De Jong, the 24-year-old Barcelona playmaker, along with Matthijs de Ligt, at Juventus.

The duo came to prominence in the Ajax side that reached the Champions League semifinals in 2019 before earning big-money moves away.

De Jong needed a season to adapt to life in La Liga after his EUR75 million (USD85 million) transfer to the Camp Nou, but he comes into Euro 2020 off the back of an outstanding second campaign.

The only concern is how fresh he is now after playing 4,492 minutes for Barcelona in the 2020/21 season, across 49 appearances in total. 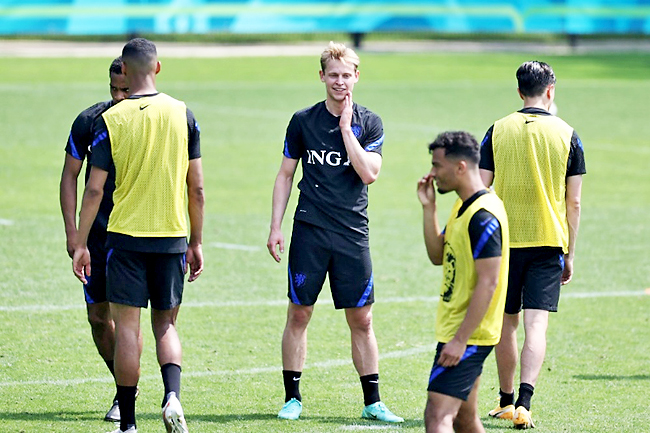 That was at least 300 minutes more than anyone else in the squad – Jordi Alba and Lionel Messi were next – and the second-most of any outfield player in La Liga.

A brilliantly gifted midfielder who has also often played in central defence, De Jong’s importance at the Camp Nou grew after Ronald Koeman – the man who gave him his full international debut – became coach last August.

He has even added runs into the box and goals to his game, including one in Barca’s 4-0 win over Athletic Bilbao in the Copa del Rey final.

“He has played in every position except goalkeeper. He is incredible,” Netherlands coach Frank de Boer said in a recent interview with Spanish sports daily Marca.

“At the Euro he will be one of our key players. If Frenkie plays well, the Netherlands will play well.”

De Jong was handed his international debut in a friendly against Peru in September 2018, as Koeman rebuilt the team following their abject failure to make it to that year’s World Cup in Russia.

The “Oranje” resurgence took them to the final of the inaugural UEFA Nations League in 2019, when they lost 1-0 to hosts Portugal after defeating England in the semi-finals.

Their signature performance in qualifying for the Euro came in a 4-2 win in Germany, when De Jong partnered Marten de Roon at the base of the midfield with Georginio Wijnaldum in front of them.

A year ago the Netherlands might have thought the decision to postpone the Euro by 12 months would work to their advantage.

Memphis Depay would almost certainly have missed the tournament had it gone ahead in its original dates as he recovered from a cruciate knee ligament injury.

The striker, who is a free agent after leaving Lyon, is fit again, but central defensive lynchpin Virgil van Dijk is now sidelined as he continues to recover from his own knee injury.

In addition, De Ligt is currently battling to shake off a groin problem.

Meanwhile De Boer is yet to convince since replacing Koeman in the dugout – the Dutch notably lost 4-2 in Turkey in World Cup qualifying in March.

The Netherlands at least get to play group games at home in Amsterdam and will surely make it out of a section also featuring Austria and debutants North Macedonia as well as Ukraine.

Repeating the famous Marco van Basten-inspired triumph at the 1988 Euro may be beyond them, but De Jong is optimistic.

“Our mission is to become champions of Europe,” he said last weekend as the Dutch – playing in a 5-3-2 system – finished their preparations with a 3-0 win over Georgia in Enschede.

“We can’t wait for Sunday and we’re all set,” he told Dutch media on Friday.