Customers could enjoy durian and explore the farm. The opportunity was obviously appealing, as it attracted more than 500 people, said the farm’s owner, Ros Sophal.

Each customer paid KHR30,000 for the durian buffet. In addition, Coca Cola and water were on offer. More importantly, visitors got a taste of natural durian in the fresh environs of the six hectars farm, in Meanrith commune’s 99 village.

Sophal told The Post about the goals of hosting the buffet at his farm. “When I look at the market price of Cambodian durian, I doubted I could make much of a profit. It was really important for me to let people know that even though it is grown locally, we are producing quality fruit. It was also a great way for the public to become aware of the farms in Kampong Thom. The durian farms of Kampot are more well-known than ours, but now that people have tasted the flavour of ours, that may change,” he said.

The plantation owner, who is currently working for a foreign organisation related to the conservation of natural resources, said the idea of hosting a durian buffet was his own idea.

He was inspired by seafood buffets that he had seen in Phnom Penh. Another reason was that he knew the difficulties farmers faced, due to imported durian. 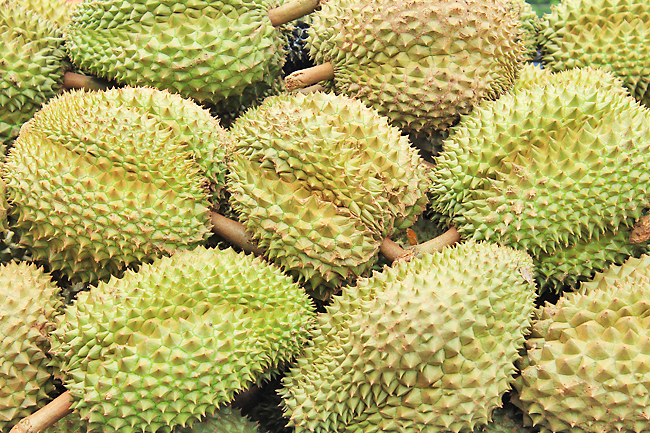 Sophal said that farmers often complained that they couldn’t compete with imported durian which could be sold at a cheaper price. Local durian was generally of a higher quality, but wasn’t as highly regarded by customers. He thought that having a buffet at the market would make it difficult to convince people they were enjoying the local product, so he decided to hold it on his farm.

“If we held the event on the plantation, people would be able to see exactly where the fruit had come from, so that is what we did. The important thing was to ensure that they believe in the quality of our durian. It was also a reminder to farmers to try new ways of attracting customers,” he said. He explained that he harvested some durian and prepared a comfortable seating area. The durians were whole, and customers could open them themselves, or ask a staff member to assist them.

Due to limited seating he allowed just 40 guests at a time. The visitors were welcome to explore the farm before enjoying a feast of durian, or get stuck into the ‘king of fruits’ immediately and then view the plantation.

He said that adults paid KHR30,000 for the buffet, while children were charged less. Children who were no taller than 0.6 metre could gorge themselves for free.

Kol Pisey from Kampong Thom province is a big fan of durian. She visited Sophal, and his wife Kieu Sokhanha, on their farm. She told The Post that she really appreciated him for coming up with such an original idea. Visiting the farm and tasting the fruit in the very fields it had grown in was an amazing experience.

Pisey added that she had eaten durian in many different places, but it had never given her the same feeling. Sophal’s farm made her feel relaxed and refreshed, thanks to the beautiful green vistas and the different kinds of fruit growing all around.

“The taste of his durian is delicious. It does not have much fibre and is sweet, which makes me want to eat more. I had not heard of his plantation as he has only been harvesting for three or four years, so I had been buying my durian at the market.

“To me, it tasted normal, but now that I have tasted his I know how good Kampong Thom durian can be. I won’t buy any other style as I am afraid it won’t taste so good,” she said.

“The price of KHR30,000 for eating a full durian in his field is very reasonable. In fact, I’m not sure if he even made a profit from the buffet. I think he just wanted to give customers a chance to get to know his plantation and to taste his fruit, which he says he grows naturally without chemical fertilisers,” she added.

Sophal said many customers came to enjoy the buffet – or take durians home – over the three days the farm was open. Some people of course, just came out of curiosity and wanted to look around the farm. All up, more than 500 people passed through, he estimated.

“Most of our visitors were from Phnom Penh, Siem Reap and Kampong Thom provinces, as they did not have far to travel. Some people from far-off provinces called to book places in advance, and he reserved spaces for them. I admit I felt disappointed with the people who came but didn’t eat,” he added.

They farm was open from 9am to 4pm over the three days, and Sophal harvested 300-400 kilogrammes of durians.

He said he received many compliments from visitors and enjoyed seeing them relaxing and exploring a new environment. He remembered a group from Thailand telling him that he was growing better fruit than they could find in their own country, and also claimed to have new ideas for further development.

“We are focussed on farming – which is important – but if we are too dependent on brokers to sell our produce, it may lead to reduced prices. I want farmers to learn how to market successfully and give customers confidence in our products. Whatever farmers are planting, they should be thinking of new ways to sell it to customers,” was his final message to other farmers.