ANTWERP, BELGIUM (AP) – Each tiny plastic package was barely the size of a fingernail and weighed all of 0.2 grammes (g). Still, the bags of white powder police seized in a Brussels cellar were yet another indication that a surge in cocaine and crack supply is hitting Europe hard.

And, with it, comes unprecedented drug violence in Belgium and the Netherlands, whose ports of Antwerp and Rotterdam have proven the main gateway for Latin American cocaine cartels into the continent.

In Belgium, the justice minister is forced to live in a safehouse, out of reach of drug gangs. In the Netherlands, killings hit ever more prominent people and there are suspicions that the reason the heir to the Dutch throne had to quit her student life and return home was also linked to threats from drug lords.

“We almost have to see it as a war,” said Dutch State Secretary for customs Aukje de Vries.

Officials in Belgium’s northern port of Antwerp last Tuesday announced yet another annual record in cocaine seizures last year: 110 tonnes, 23 per cent up compared to 2021 and more than twice the amount confiscated five years ago.

“It astounded us,” said Belgian Finance Minister Vincent Van Peteghem. “It also means the drugs that are entering Europe (undetected) through our ports are also rising. And that, of course, has a huge impact,” he told The Associated Press. 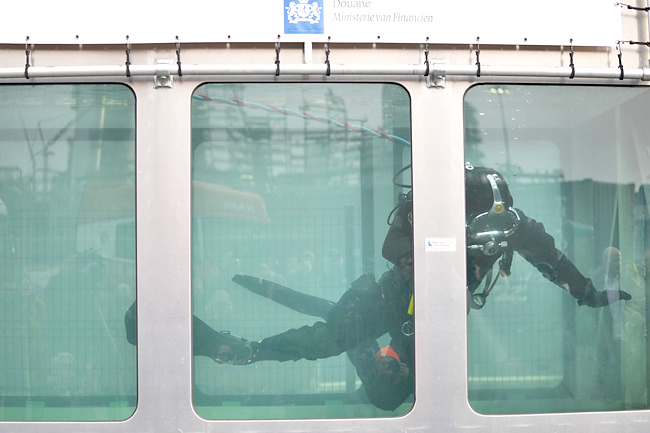 Because with cocaine comes not only addiction, decay and death, but also violence and gang warfare.

In the past three years Antwerp has suffered dozens of grenade attacks, fires and small bombs often linked to gangs trying to carve up the thriving cocaine trade.

Last Monday, the city better known for painter Peter-Paul Rubens and a famed fashion school saw the fatal shooting of a child, likely an unwitting victim of the drug war.

“A girl of barely 11 that obviously has nothing to do with crime gangs is now the victim of narco terror that is turning ever more ruthless,” said Antwerp Prosecutor Franky De Keyzer. The situation in Belgium has become so bad that even Justice Minister Vincent Van Quickenborne, is living in hiding after evidence emerged drugs gangs might be seeking to kidnap him, or worse.

In the Netherlands too, home to the global port of Rotterdam, murder and intimidation have become increasingly common as drug lords go to extreme lengths to protect their cut of the multibillion dollar market.

And 50 tonnes of cocaine were seized there last year which, combined with Antwerp, made for another record year.

Among high-profile murder victims in the Netherlands in recent years were a lawyer representing a witness in a drug gangsters’ trial and crime reporter Peter R de Vries, who was a confidant to the same witness.

Unspecified threats to the heir to the Dutch throne, Princess Amalia, forced her last year to abandon student life in Amsterdam and return home. Security reportedly also has been beefed up around Prime Minister Mark Rutte. In both cases, it’s suspected that drugs-related crime is a factor.

And in places like Brussels, where the violence might be less spectacular, cocaine and crack are starting to have a chilling effect in areas like the Marolles, a neighbourhood so folksy quaint it figured in Tintin’s cartoon adventures.

The chief police inspector for the neighbourhood, Kris Verborgh, said South American cocaine “seems to be – or seems to have become – the new normal”.

Verborgh said the cost of the base product in Colombia amounts to some EUR500 a kilogramme. A kilogramme of the finished product can turn into some EUR70,000 euros on Belgium’s streets.

“It is a massive amount of money that you can earn relatively easily,” he said.

Because of that, seizures in the dozens of tonnes in Antwerp and Rotterdam may still constitute a losing battle in a multibillion global trade from the Latin American nations of Colombia, Peru and Bolivia to the major cities of Europe.

Brussels’ Marolles is hardly ground zero of that trade and many of the 11,000 people living in its warren of narrow streets are among the poorest in the city of 1.2 million.

Yet, over the past months they have been sought out for cocaine and crack sales.

Verborgh said each tiny dose of 0.2g sells for EUR20, within reach of even a beggar seeking instant gratification for whom a traditional 0.8g dose costing EUR50 is too expensive.

In a cocaine seller’s world, it makes economic sense.

Fixers sometimes sell crack ready-made to be smoked on the curbside of once tranquil streets, even in a subway station with families walking by.

Gangs start intimidating locals not to squeal, hurl rocks at passing police vans and try to turn streets into no-go zones for police – who Verborgh stresses, are not giving in.

Since mid-October, there have been 115 arrests in the neighbourhood. The power of the gangs is such however, that within half an hour a new seller may be on the same corner.

And increasingly, the young are drawn in to the expanding trade. “Several years ago, we never saw somebody who was 12 or 14 years. Now we see them being more or less part of the gangs,” doing things like stakeouts, Verborgh said.

Just last week, police in the Marolles stumbled upon a cache in a seemingly deserted cellar where they found cocaine and other drugs, precision scales, a drone, pepper spray and two swords. One of the two teenagers arrested was 14.

“Well, it’s a problem because normally a youngster of 12 or 14 years old should be at school,” Verborgh said.