LONDON (AP) – Thousands of United Kingdom (UK) train drivers walked off the job yesterday in a strike over jobs, pay and conditions, scuppering services across much of the country.

The action was the latest in a spreading series of strikes by British workers seeking substantial raises to offset soaring prices for food and fuel. The 24-hour strike by members of the Associated Society of Locomotive Engineers and Firemen halted trains on major routes, including the main lines between London and Scotland and commuter services around the capital.

Weekend workers, football fans heading for games and families seeking seaside solace from a heat wave were among those forced to change their plans.

This has been a summer of travel disruption in Britain.

Thousands of railway cleaners, signalers and maintenance workers staged a series of one-day strikes in June and July. More strikes are scheduled next week on nationwide trains and on London’s bus and subway network. 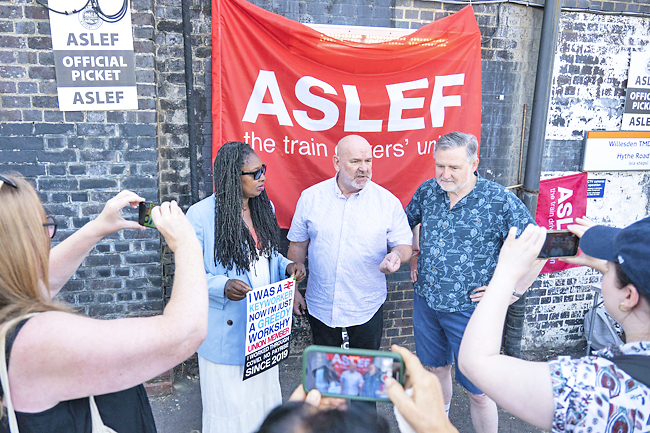 The disputes centre on pay, working conditions and job security as Britain’s railways struggle to adapt to travel and commuting habits changed – perhaps forever – by the coronavirus pandemic.

There were almost one billion train journeys in the UK in the year to March, compared to 1.7 billion in the 12 months before the pandemic, and rail companies are looking to cut costs and staffing after two years in which emergency government funding kept them afloat.

“We find ourselves in a position where we are saying ‘That won’t be enough,’ they say ‘It’s down to the government,’ we talk to the government and they say ‘You have got to talk to the employers,’ and then we end up with a situation where it goes round in circles,” said General Secretary of the Associated Society of Locomotive Engineers and Firemen Mick Whelan.

The Department for Transport said claims of government meddling were “entirely false”.

UK inflation has hit a 40-year high of 9.4 per cent, and the Bank of England says it could rise to 13 per cent amid a recession later this year. The average UK household fuel bill has risen more than 50 per cent so far in 2022 as the war in Ukraine squeezes global oil and natural gas supplies.

Another increase is due in October, when the average bill is forecast to hit GBP3,500 a year.

Adding to the travel chaos, air travellers in many countries are facing delays and disruption as airports struggle to cope with staff shortages and skyrocketing demand for flights after two pandemic-hit years.