KAWASAKI, JAPAN (AFP) – Naho has played a crucial role in fighting Japan’s two deadly coronavirus waves this year, the worst the country has faced since the pandemic began.

The 21-year-old is not a doctor or a nurse – she’s a cleaner on COVID-19 wards, making sure every surface is sterilised while taking precautions to keep herself safe.

“All the time, I am afraid of the possibility of catching it,” Naho, who did not want her surname published, told AFP at the hospital outside Tokyo where she has worked since January.

Japan’s outbreak has been less severe than in many other places, with around 14,000 deaths in total. 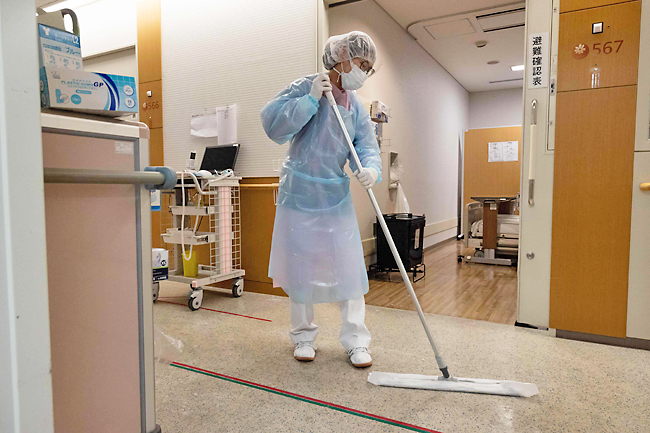 “At the beginning, there was a period where I found it really difficult,” Naho said.

“It troubled me not to be able to do anything for the patients who were suffering and groaning in front of me.”

At work, she puts on protective gear – two masks, a visor, gloves, a hairnet and plastic aprons over her clothes.

She assiduously disinfects the floor, beds and everything else, then leaves through a ventilated containment unit, disposing of the plastic items before unzipping the door and stepping out into the corridor.

Case numbers have been brought down by curbs on commercial activities, and the government is now preparing to lift a virus state of emergency in Tokyo and other areas.

But with just six per cent of the population fully vaccinated so far, experts warn a rebound in infections could soon follow, with five weeks until the Olympics begin.

Naho recalled how harrowing the last surges were.

“Almost all the beds were occupied and nurses who should have finished at 5pm were doing three or four extra hours before going home,” she said.

“They would thank me because I was easing their burden a little.”

Olympic officials said the virus-postponed 2020 Tokyo Games, which open on July 23, can be held safely under strict anti-infection rules.