ROCHDALE, UNITED KINGDOM (AFP) – As a child, Hopwood DePree heard stories about the family owning an ancestral country home in England but always thought it was the stuff of legends.

That was until the Hollywood producer tracked down a red-brick 15th-Century pile with 60 rooms in the countryside in northwest England.

In 2017 the American quit California to live full-time near Manchester and restore the building, which had fallen into a state of disrepair, to its former glory.

The unlikely chain of events began one evening in 2013 when DePree was looking on a genealogy website and found an old photo of the property.

“My gosh. It’s the place my grandfather was talking about,” he recalled thinking.

The property was Hopwood Hall, explaining DePree’s unusual first name passed down the generations, which he had always felt embarrassed about.

Soon afterwards DePree got on a plane on a mission to find Hopwood Hall, “just out of curiosity”. 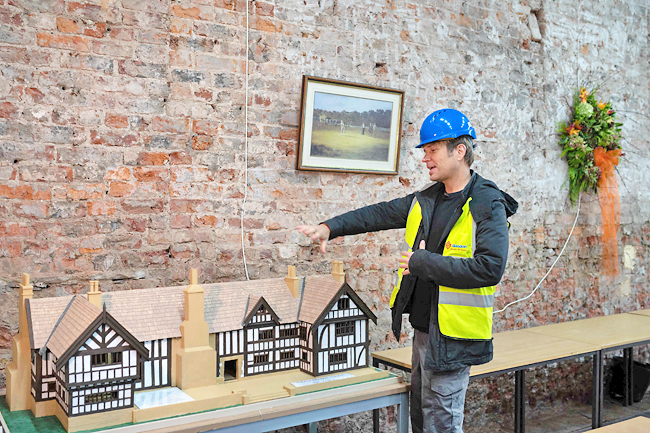 His arrival was inauspicious: when he pushed open the door, there were rodents and part of the roof had collapsed.

But coming from Los Angeles, he remembers his sense of “emotion” at being surrounded by history: the original chimneys and doors and the nursery where his ancestors were born.

Locals who showed DePree around were quick to warn that “if nothing is done in the next five to 10 years, it would crumble and turn into a ruin and be lost forever”, he told AFP.

Hopwood Hall had been abandoned for decades. The owners, distant relatives of Hopwood, died without an heir after their two sons were killed in World War I.

It was then used to make uniforms during World War II before being taken over by monks.

Five years have now passed since DePree began his renovations.

The results are still far from Downton Abbey, the fictional stately home that is the setting for the hit British television series about an aristocratic family in the early 1900s.

DePree has written a book about the restoration process called Downton Shabby, detailing his new life in glowing terms despite the slow progress.

“Everywhere you look, there’s something to do,” says the 52-year-old, who fits the Hollywood mould with his blond hair and blue eyes.

“I knew it was a massive project, but I had no idea of the many challenges, the delays… It’s exciting.”

Touring the building site in a hard hat, DePree warns of a hole in the parquet floor or a badly placed beam, while construction workers repair the building’s facade.

The 39 chimneys are being renovated, along with part of the roof. Now the most urgent task is to finish the windows.

He calls it “a race against time, above all with the heavy rains here” – and the bats.

Despite the dilapidation, treasures have survived the ravages of time and robbers: the family crest on the chimney pieces, intricate wood carvings and the lozenge-shaped stained-glass windows.

One of the fireplaces was a gift from the poet Lord Byron, DePree said. The Romantic poet wrote many of his verses in the castle. The composer Frederic Chopin played in the banqueting hall.

In the 1970s, such abandoned places began attracting various subcultures and Beatle John Lennon is rumoured to have visited. Street art painted on the walls dates back to this era.

Hopwood has launched a YouTube channel where he shares his adventures and draws mockery for his meagre DIY skills.

“I try to learn. But that’s not my strength,” he said. “Most of the project, I do it behind my computer.”

DePree is seeking further investment as the project is set to cost around another GBP10 million (USD12.2 million). Several charitable foundations, including Historic England, are contributing financially, as are Rochdale Borough Council, local residents and of course DePree himself.

“We need private investment,” he explained. Some local people have been helping out on the building site.

“Many in the community have a link with Hopwood. Their ancestors used to work here. It was one of the biggest employers in the area,” DePree said.

Now, the house is in one of England’s most deprived regions.

Hopwood Hall should eventually become a community hub, used for concerts and exhibitions and wedding parties in the gardens. DePree hopes to finish in five years.

“I miss the sun in Los Angeles. Sometimes my friends call me from the beach and it’s pouring rain here,” he said. “I have no regrets. This does feel like home.”