SANTA MONICA, CALIFORNIA (AP) — When Giichi Matsumura arrived at his final resting place in December, the people who knew him best already were there.

His father, Katsuzo, who died in 1963, was nearby. His brother and two of his three sons were a short walk away, all buried in the shady, grassy haven of Woodlawn Cemetery in Santa Monica.

They last saw Giichi alive in the waning days of World War II at the Manzanar internment camp, one of 10 where the United States (US) government held more than 110,000 people of Japanese descent for more than three years, claiming without evidence they might betray America in the war.

In the summer of 1945, Matsumura hiked from camp into the nearby Sierra Nevada, the rugged spine of California, and never returned. His remains were committed to a lonely mountainside grave left to the elements. 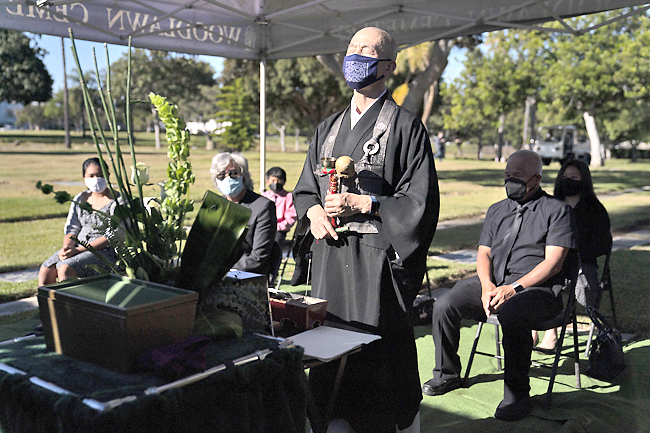 None had lived long enough to bring him home 75 years later, after his remains were unearthed by a hiker in 2019.

The duty to bring him back fell to a granddaughter born decades after he died.

Lori Matsumura never expected to play this role. She knew of her grandfather’s unfortunate death, but it wasn’t something she often thought about.

Then she got a call in October 2019 from the head of search and rescue for Inyo County.

A hiker bound for the summit of Mount Williamson, a massive peak overshadowing Manzanar, had veered off route near a lake and spotted a skull in the rocks. He and his partner uncovered a full skeleton.

“It was a complete surprise when I received a call from the sheriff,” Lori Matsumura said. “There were stories my grandmother told me about her husband passing on the mountain. They were stories to me, and it wasn’t reality. But then when the sheriff called it, you know, brought it into reality.”

The sheriff wanted a DNA sample to determine if they were the bones of her grandfather.

It became the first step in a mission to reunite her ancestors, a journey that awakened her to a history she heard as child from a generation more inclined to look forward than dwell in the past. Stories that once seemed rosy lost their bloom when she faced with the harsh landscape where her relatives were imprisoned.

Lori’s father, Masaru, was a senior in high school in Santa Monica when his family was bused to Manzanar War Relocation Center in April 1942, about two months after President Franklin Roosevelt ordered the imprisonment of all people of Japanese descent on the West Coast.

Lori Matsumura always meant to visit Manzanar. Now she had to make the three hour drive north from Los Angeles.

In October 2019, she gave an oral DNA swab at the sheriff’s station in Lone Pine and then drove a few miles north to the former camp, where the National Park Service operates it as a historic site.

The sentry house still stands at the entrance. A replica of one of eight guard towers and replica barracks, a latrine and a mess hall recreate what the camp looked like, minus hundreds of other structures once crammed in the square mile of high desert surrounded by barbed wire.

“How could something like this happen in America?” Lori thought.

She was only struck by the gravity of her family’s loss when she visited the land they once inhabited.

Standing near a sign for Block 18, Matsumura was filled with sorrow looking at a barren patch of scraggly brush and weeds.

“I was blown away by how desolate the place was,” she said. “Seeing it in person made it so sad for me. I don’t think I could have survived that.”

For the first time, Matsumura felt a connection to the place her family lived. Walking in their footsteps made it real.

While the buildings were gone, one reminder loomed large: Mount Williamson standing at 4,381 metres to the west.

Her grandfather hiked toward that peak on July 29, 1945 to paint while other men went fishing in a chain of alpine lakes. He got lost in a storm on August 2 and perished on the mountain.

The fishermen searched in vain when the weather cleared and then returned to camp, assuming he had retreated below.

A local hiker discovered the body in the granite in September.

A burial party laid him to rest near one of the lakes. A piece of paper affixed provided his name, age and said, “Rest in Peace” in Japanese characters.

The gravesite location was not widely known so it initially appeared to be a mystery when hikers unearthed it on October 7, 2019. Inyo County Sheriff’s officers flew by helicopter to retrieve the remains.

After Lori’s DNA was matched with a tooth found in the grave, she and other family members went to the county coroner’s office to view the remains.

As Coroner Jason Molinar began to lead Lori and her niece, Lilah, from his office to a private viewing room, Lori halted in the doorway to reassure the scared 11-year-old.

Laid on a sheet-covered gurney were the bones of the grandfather she’d never met.

The skeleton was roughly arranged in order. The skull was bleached white, most likely from sun exposure. The ribs, spine and joints were stained a shade of brown.

Molinar pointed to a coil of fishing line, the remains of a rusty pocket knife and two buttons found with the bones.

“The crazy part is the fact that it’s this well-preserved,” Molinar said. “Usually after this many years, you just find fragments.”

Lori and Lilah said a prayer that he would rest in peace and be reunited with his family.

Lost once and found twice, it was now time properly bury Giichi Matsumura.

On December 21, Lori, two brothers, a sister-in-law and niece and nephew held a service at Woodlawn.

The Reverend Shumyo Kojima, a Buddhist priest, said the service was to make his final resting place peaceful and reunite Giichi with his wife. She had been buried with the lock of his hair and nail clippings and his name was already on the gravestone.

“He moved from the high Sierra to here. All of you are eyewitnesses,” Kojima said. “This is a kind of house-warming party. So, everyone will be here to celebrate his new residence.”

A cemetery worker placed the container of ashes in the shallow grave and Lori took her turn sinking a shovel into a pile of dirt and dropping it on the ashes.

Thinking back on her more than year-long mission, she wished the hikers hadn’t disturbed the grave. She imagined it as a beautiful setting in mountains he loved.

But she was happy to bring him home.

“His body is laid to rest with everyone, so it’s kind of just closed the chapter on my dad and his siblings and parents,” she said.

She only regretted they weren’t alive to see it.