Dortmund captain Reus, 31, is back to his best after struggling with poor form and injury this season, revelling alongside the 20-year-old Haaland.

Reus has scored in Dortmund’s last two games with Haaland, their top scorer this season with 33 goals in 34 games, providing both assists.

In nearly a decade at Dortmund, Reus has played as an attacking midfielder behind talented strikers such as Robert Lewandowski, Pierre-Emerick Aubameyang and Paco Alcacer.

Reus is full of praise for his team-mate, who grabbed headlines earlier this season as the youngest player to score 20 Champions League goals.

“I’ve never seen anyone like Haaland at this club,” Reus told the Kicker meets DAZN podcast. 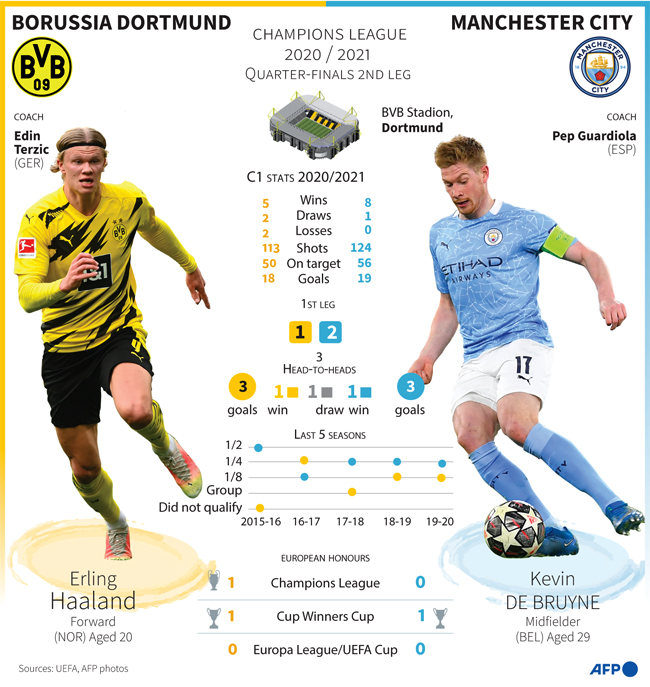 “He’s unique and still very young. He’s developed massively over the past six to nine months.”

Reus scored what could prove to be a crucial away goal in their 2-1 first-leg defeat in Manchester when his effort, from Haaland’s brilliant pass, curled past City goalkeeper Ederson.

A 1-0 home win, or victory by at least two clear goals, would send Dortmund into the semis to face either holders Bayern Munich or Paris Saint-Germain (PSG).

Pep Guardiola’s City are desperate to reach the last four after exiting at the quarter-final stage in each of the last four seasons.

With Reus in full flow and splitting defences with his smooth passes, Dortmund can throw off their erratic Bundesliga form and play like one of Europe’s best teams.

“He is a big legend here and we need him at his best,” Haaland said of Reus in January. “He has a vision that no one else has.”

After converting Reus’ silky pass to score at home to Sevilla in the last 16, Haaland celebrated by simply lifting his captain clean off his feet.

The Norway attacker has not scored in his last six games for club and country after three blanks on international duty last month.

There are concerns Dortmund could lose Haaland, who is under contract until 2024, next season after his agent Mino Raiola held talks with Barcelona and Real Madrid.

Yesterday, Raiola told sport1.de he has met with senior figures at Dortmund, who have made it clear they do not want to sell their top-scorer this summer.

Meanwhile on the pitch, with defences worrying about keeping an eye on Haaland, Reus has been revelling in the extra space the 20-year-old runs often provide.

“He’s become really good with the ball at his feet and with a defender at his back,” said Reus.

“That wasn’t the case when he first joined us, but his achievements and goals give him an unbelievable power that helps us.”