THE WASHINGTON POST – Q: When I’m falling asleep, I sometimes feel my muscles twitch and wake up suddenly. Why does that happen? Should I be worried?

A: Most people think of sleep and wakefulness as two different states of being, but there are moments in which the lines between them blur.

During this transition, as you drift off to sleep, you might feel a twitch that jolts you awake.

These twitches – known as hypnic jerks or sleep starts – involve brief contractions of one or multiple muscles and can be accompanied by other sensations, such as the feeling of falling. Humans aren’t the only ones who experience them: Dogs also twitch when they fall asleep.

These experiences are quite common and rarely are a cause for concern. They can be provoked or exacerbated by stress, sleep deprivation and excessive caffeine use.

While scientists are still unsure about what causes hypnic jerks, changes in brain excitability during wake-sleep transitions are thought to be involved.

The brain consists of more than just the large, wrinkled structure that looks like a boxing glove – the cerebral cortex. 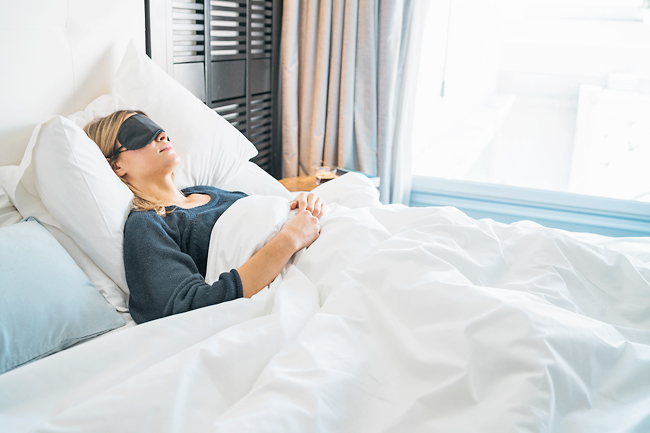 There’s also a small, tubelike structure called the brainstem that connects the cortex to the spinal cord and controls essential processes for life, such as breathing, swallowing and heart rhythms.

Scientists think that hypnic jerks are triggered by unstable activity in this brainstem region as we’re falling asleep.

During relaxed wakefulness, as your eyes close and your body calms, your brain waves consist of mixed fast frequencies and a dominant “alpha” rhythm that is steady.

As you transition to sleep, the alpha rhythm starts to break down, becoming disorganised, and your brain waves generally start to slow.

It’s at this point that you might twitch awake.

Most people – an estimated 60 to 70 per cent of them – have experienced hypnic jerks. The twitching, which might not even wake you, occurs across all ages, including among children and older adults.

I rarely see patients come into the sleep clinic solely for hypnic jerks. On the other hand, the sensory symptoms that can accompany them tend to cause more concern.

These sensations include the feeling of falling but can also involve seeing a flash of bright light or fragments of a dream.

You might also feel electrical tingling or warmth coursing through the body, which can occur in the limbs or in the trunk. These sensory symptoms can occur with or without twitching.

I once saw a patient who described hearing a loud bang inside their head on most nights when they would fall asleep. They often also noticed feelings of an electrical shock going up their spine. These sensations were disturbing and made it hard to fall asleep again.

This rather striking type of sensory sleep start is known as exploding head syndrome. The sound doesn’t cause any pain or a headache but can induce anxiety and distress. To diagnose it, I ask my patients questions to differentiate it from nocturnal headache disorders, which are painful, or post-traumatic stress disorder – for which the loud sounds occur during flashbacks.

In the case of this patient, symptoms were improved with reassurance that this feeling was not harmful, as well as the short-term use of a sleeping aid. It’s likely that it was triggered by increased stress.

And while the causes of exploding head syndrome are not fully understood, it probably shares similar mechanisms with hypnic jerks.

These sensations don’t usually require medical treatment unless they’re causing anxiety and insomnia. If you’re concerned and would like to prevent them from happening, I recommend optimising your sleep hygiene by reducing stress and keeping a regular sleep schedule with enough time for sleep (at least seven hours for the average adult). Other tips include reducing intake of caffeine – no more than two cups a day and stopping after lunch – and nicotine, both of which can worsen sleep quality.

If you experience significantly disturbed sleep or feel excessive sleepiness during the day due to hypnic jerks, it’s a good idea to visit a sleep medicine physician for an evaluation.
Otherwise, if a twitch jolts you awake, the best course of action is just to try to fall back to sleep.