HOUSTON (AP) – Luka Doncic (AP, pic below) scored a season-high 50 points, including 17 in the fourth quarter, and the Dallas Mavericks held on to beat the Houston Rockets 112-106 on Friday night.

Doncic, who also had 10 assists and eight rebounds, was 17 of 30 from the field, including six of 12 on three-pointers. It was Doncic’s second career 50-point game.

“When you feel hot, you feel like everything will go in.”

“Luka is Luka,” Kidd said. “He’s the best player in the world. He showed that tonight, carrying the load offensively. I don’t know what else to say about him. He was incredible tonight.” 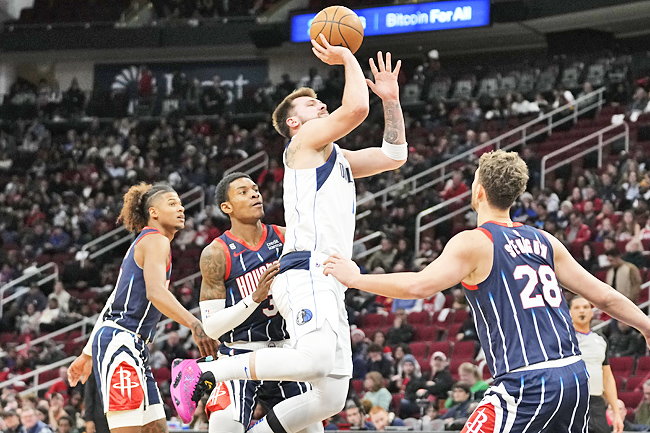 Spencer Dinwiddie and Davis Bertans each scored 11 points for Dallas, which shot 45 per cent and made 16 of 44 threes.

Kevin Porter Jr scored 14 points, and Kenyon Martin Jr had 10 for the Rockets, who shot 46 per cent.

Houston coach Stephen Silas said Houston’s defensive game plan was good, but there was “just too much Luka”.

“I’m not sure that he made an easy shot,” Silas said. “We made every shot hard, and that’s the greatness of a great player. That’s what Luka does.”

Tied at 94 with seven-and-a-half minutes remaining, the Mavs used an 11-3 run to open up an eight-point lead on a three-pointer by Doncic, who blew a kiss to the crowd.

The Rockets responded with seven straight points to cut the lead to 105-104 on Sengun’s layup with 3:13 left.

After Bertans hit a three to up the lead to four, Smith cut the lead to two with a jumper with one-and-a-half minutes remaining.

The teams traded turnovers and missed shots before Doncic nailed a three-pointer with 18 seconds left to give the Mavs a five-point lead.

Houston erased a 16-point, second-quarter deficit, outscoring the Mavs 33-15 over a nine-minute span of the second and third quarters to take a 69-67 lead on a three-pointer by Smith with 6:15 remaining in the third.

Mavericks: Dorian Finney-Smith missed his second straight game with a right adductor strain. Kemba Walker was out of the lineup due to left knee injury recovery. Reggie Bullock left the game in the third quarter with a neck strain.

Rockets: Garrison Mathews (illness) returned to the lineup after missing the last three games. He was scoreless in 12 minutes.

Jae’Sean Tate (ankle) could return soon, Silas said. Eric Gordon was out of the lineup with a bruised left thumb.