Dogs can be healing for children

CNA/THE NEW YORK TIMES – An unexpected benefit of adopting Annie, my family’s 40-pound, floppy-eared mutt, is the soothing effect she has had on my children.

My sons often come home from a long, packed day at school and flop down on the floor next to Annie’s bed, lying quietly while she licks their fingers and cheeks. Or they’ll rub her belly, taking a beat before they pivot to dinner and homework and everything else that needs to happen before they head to bed.

Annie is a true rascal with endless energy, but her mere presence in our home calms my kids in a way I did not see coming when we brought her home over a year ago.

A study published recently shines a light on that powerful child-canine connection. It found that twice-weekly sessions with a dog and its handler significantly lowered children’s levels of cortisol – the body’s stress hormone – which they measured through saliva samples. The intervention appeared to be more effective than guided relaxation sessions.

“Our study shows, for the first time, that dog-assisted interventions can indeed lead to lower stress in children, with and without special educational needs, over a typical school term,” said Professor Dr Kerstin Meints in Developmental Psychology at the University of Lincoln in England, and one of the study’s researchers. 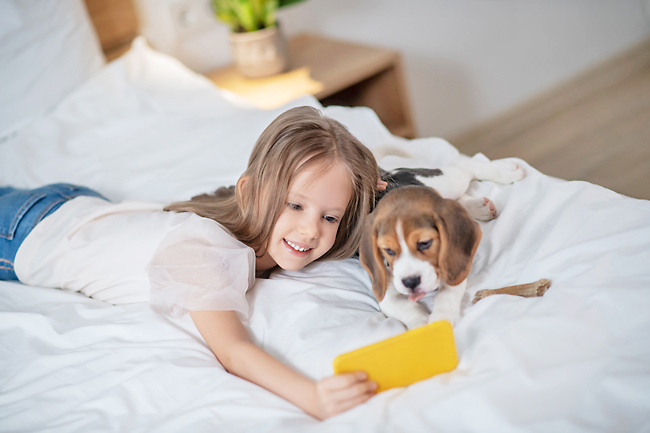 Her team’s randomised, controlled trial, published in the journal PLOS ONE, included 149 neurotypical and non-neurotypical eight- and nine-year-olds in Britain, who were sorted into three groups.

In one group, children spent 20 minutes twice a week, over the course of a month, with a trained dog and its handler.

They’d pet the dog for a few minutes if the dog and children were up for it, ask some questions and play.

In another group, children worked on relaxation exercises over the same time frame without any dogs around, doing things like wiggling their fingers and toes before lying down on yoga mats to listen to a guided meditation.

A third group served as a control.

Overall, they found that children in the dog-intervention group had lower cortisol levels than their peers in both the relaxation and control groups.

“As a clinical handler who works full-time with a facility dog, I am not surprised to see such positive results coming out of this study,” said coordinator of the Paws and Play dog programme at Mount Sinai Kravis Children’s Hospital in New York City Ali Spikestein, who was not involved in the new study.

Spikestein is well acquainted with the therapeutic potential of canines, working with her hospital’s three goldendoodles – Professor, Amos and Moby – to sit and sometimes cuddle with children who are experiencing significant pain or who are struggling with simply being in a hospital setting.

But she said it was “exciting and promising” to see a new study specifically looking at the potential role dogs could play in calming otherwise healthy children in schools.

Indeed, researchers and mental health professionals said there’s a real need for more research into how animal-assisted interventions of all kinds can help children.

Dr Meints also hopes to see more controlled trials as well as longer term studies that can answer questions about how often kids should partake in dog-assisted therapy sessions, and how long the sessions should last.

There are also big questions about how important it is for children to be able to touch the dog during sessions, or whether it is simply enough for them to be in the presence of the animal, she said, and about whether group or individual therapy is best.

Tempting though it may be for parents like me to extrapolate, there is a big difference between canine therapy and the kinds of unpredictable interactions children and pets have when they are simply hanging out together at home. (Though research has demonstrated that dog ownership may be good for children’s psychological development).

“There is a difference between a trained animal and a household pet,” said attending psychiatrist with the department of child and adolescent psychiatry at Children’s Hospital of Philadelphia Dr Arun Handa.

“That being said, it’s not unreasonable that household pets can provide some kind of comfort and support.”

No matter the setting, children must be taught how to interact with dogs, and the American Academy of Pediatrics offers parents guidance about choosing and living with a family pet.

The children in the new study were reminded before sessions not to kiss, hug or crowd their therapy dogs in any way, and were always closely monitored by adults.

The team looked for signs the dogs were unhappy, like nose-licking, moving their body or head away, or repeated yawning, and ended any sessions in which the dogs seemed tired or like they no longer wanted to take part.

I can attest that in my own home, that kind of training is ongoing.

Sometimes, I have to remind my sons to give Annie her space; other times, she is the one who needs reminding. But more often than not, my children and my dog seem to share an emotional understanding that I can’t help but feel is good for them.

“Animals provide this unconditional love,” Dr Handa said, “and come from a place of non-judgemental support.”