Do we know enough about glaciers?

ANN/THE KATHMANDU POST – Glaciers all over the world are melting. This fact is irrevocable.

The fundamental goal of studying glaciers is to calculate how much they are melting, and most importantly, how much longer they will exist.

The future of these glaciers is particularly important for the future of water availability in the downstream community and associated disasters from the gradual melting of these landforms.

Our findings from Everest-South Col glacier, in particular, show a rapid thinning of the ice even at the highest place in the world, where the temperature is always freezing.

This raises an important question on the use of some of the widely used mathematical models that we employ to model glacier behaviour, which assume that there is a simple relationship between the volume of melt and air temperature. 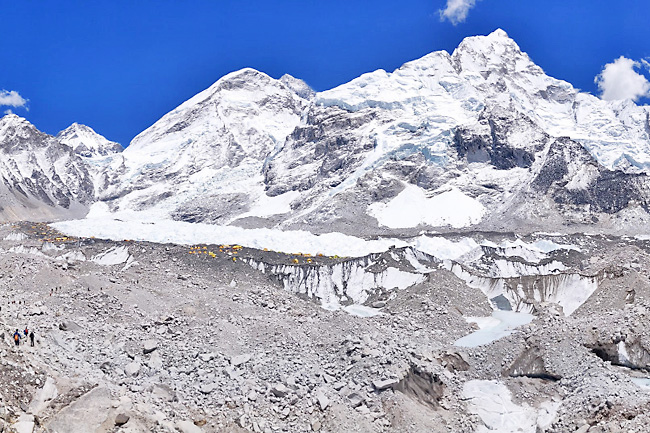 This approach has been quite successful in modelling ice melt at lower elevations, but results from South Col glacier suggest that it is not well-suited for understanding how quickly glaciers at high elevations will shrink.

Only now are we slowly beginning to understand that high-elevation glaciers are even more sensitive to warming.

Tens of thousands of glaciers populate the Hindu Kush Himalaya region, but very few have been studied.

Those glaciers that have been measured tend to be the lower-lying ones, which are relatively accessible, but which may behave quite differently to those at higher elevations.

Because the highest glaciers are very difficult to access and given the very few existing ground-based measurements, our understanding of such glaciers is still very limited.

This is particularly important as the Hindu Kush Himalaya region encompasses the largest volume of ice outside the polar regions.

More than 50 per cent of this ice volume lies higher than 5,000 metres above sea level; yet measurements here are few and far between.

The result from scientific collaborations on Everest has brought us face to face with a new reality-even glaciers on the world’s highest peak are losing ice at an alarming rate. The evidence from South Col glacier may be localised in scale, but has profound implications for our understanding of glaciers at high elevations across the entire Hindu Kush Himalaya.

South Col glacier lies on the shoulder of Mt Everest, and any climber who wishes to reach the summit on the Nepali side must cross this glacier.

The allure of Everest attracts hundreds of climbers every year, and thus the state and fate of this glacier is crucial as it directly impacts these climbers and changes in the glacier could put them at even greater risk.

By taking ice from deep within glaciers, we learn something about the history of the glacier and past climate. An ice core extracted from South Col glacier showed that the glacier is losing nearly two metres of ice each year. That is taller than the height of most people!
This rapid mass loss at the highest elevation in the world can be attributed to the gradual loss of the snowpack, which blankets and protects the glacier.

With the warming climate, there has been a gradual and long-term increase in sublimation-the change of ice or snow directly to water vapour-which has resulted in the depletion of the snowpack at these altitudes.

Once the bright snow cover has been removed, the underlying, darker ice is then exposed to the intense solar radiation, which accelerates the melting by 20 times.

These vital findings agree well with results from a previous study in 2017 from Khumbu glacier, located on Everest below South Col glacier. The study revealed that even the coldest ice in the glacier was two degrees Celsius warmer than the average yearly temperature in the Khumbu region.

Both these studies illustrate how vulnerable ice masses at these elevations are to even minor warming; previously, we had assumed that ice in high elevations was only moderately affected by climate change.

Furthermore, these findings highlight that most models of glacier behaviour, which try to predict how glaciers at these high elevations will change in the future based on measurements made on lower glaciers, underestimate the rapid pace of glacier change.

The current models already predict a grim scenario for the fate of the glaciers, but these findings show that the correct scenario may be much worse.

The next step is to explore whether the results are similar for the rest of the Hindu Kush Himalaya.

For the Khumbu region, this is not the only bad news about glacier changes. Our study of South Col glacier outlines the implications these results will have in the region, specifically on the Everest climbing route. In several areas of the route, the surface will progressively transition from snowpack to ice and then to exposed bedrock. Similarly, avalanches will become more dynamic owing to the fragility of the ice. These changing dynamics and increased glacier melt will be even more pronounced towards the Khumbu Icefall, which is one of the most dangerous parts of the route, threatening the safety of climbers along the route and Everest base camp.

Our findings from Everest show that we need to increase our efforts to understand what is happening to the glaciers in the Himalaya, including the almost inaccessible ones at high elevations. Research expeditions to study glaciers are both resource and time consuming and require detailed planning and funding. However, this is where we need to focus our efforts and our funds. Only when we can fully grasp the gravity of what is going on at these elevations, can we accurately forecast the fate of these resources and plan accordingly.

When we have more measurements, we can include this information in our models, thus improving them so that our work reflects the ongoing effects of climate change on glaciers and the subsequent effects on water resources. Changes in the South Col glacier are an indicator of climate change on a global scale, so we need to continue calling for global commitment to protecting water resources and reducing disaster risk.