Diving into the unknown

THE WASHINGTON POST – On day two of our three-night cruise aboard the new Disney Wish from Port Canaveral to the Bahamas, my husband asked me a question I was surprised hadn’t already come up in our nearly six years raising two young kids together in Florida.

“So, wait,” he said over omelets and Mickey-eared pancakes at 1923 restaurant, aboard the 4,000-passenger ship that debuted in July as Disney’s newest ship in 10 years. “Is it called ‘Walt Disney World’ because of an actual person?” he asked.

Javier is from Cuba. And his upbringing on the communist tropical island resembled that of our kids in Tampa – not to mention my own childhood, four decades ago in the suburbs of Northern Virginia – in almost no relatable way.

While he’d spent his youth raising rabbits to sell for meat and scaling coconut trees in his bare feet to pick their fruit, I’d taken Girl Scout cookie orders in the Safeway parking lot and pedalled my Huffy to the 7-Eleven for peach Nehi sodas.

Where I’d lobbied my parents for a trip to Walt Disney World, he’d been happy visiting the city park. 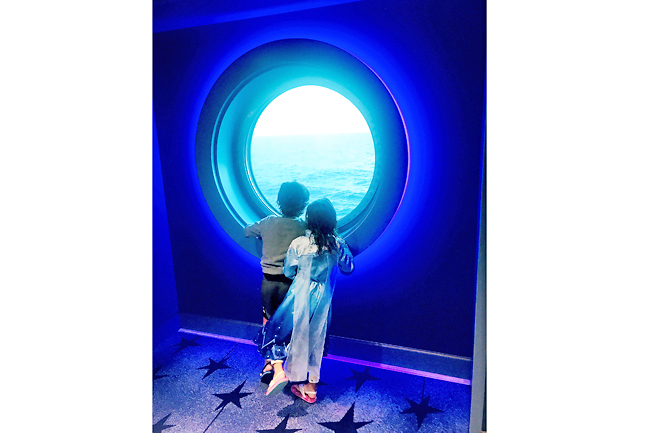 Javier was nearly 40 by the time he immigrated to the United States (US), and raising kids together brought our differences into sharper focus. As often happens in our relationship, I discovered that something seemingly universal – in this case, Disney – isn’t, well, universal.

So, in that restaurant decorated with sketches and props from Snow White and the Seven Dwarfs and Cinderella, among other films he’d watched for the first time with our kids, I explained that Walt Disney had been a real person.

As an American, I couldn’t imagine a childhood untouched by the brand. Meanwhile, Javier wasn’t really sure when – or if – he’d even heard of Mickey Mouse as a kid. Most of the cartoons he grew up watching were Russian, dubbed in Spanish and broadcast on state television at 6.30 every evening.

Our children – four and five – are prime ages for believing in Disney magic. And I was as excited for them to meet the characters as I was to relive my own childhood through their eyes. I wondered whether the cruise would feel like gibberish to Javier, but if my husband is any indication, the experience translates, even if you’re introduced to it in middle age.

Our ship helped – it had references to the movies and characters everywhere you looked. A fantastical glass bubble chandelier in the piano bar, Nightingale’s, was inspired by Cinderella’s soap suds; Rapunzel’s golden locks drape from the ship’s stern. There’s even an app to unlock augmented reality experiences referencing Moana, Tinkerbell, Tiana and other characters hidden throughout the tech-savvy vessel.

Other Disney touches are more immersive. At the ship’s Frozen-themed dining experience – one of three types of dining experiences – our children fully bought into the fairy tale that they were walking through the hallway of Elsa and Anna’s childhood castle on their way to Anna and Kristoff’s engagement party.

Seeing the wonder in their eyes as Elsa and Anna popped by our table to thank them for coming was an experience Javier and I will remember for a long while.

The Wish purports to dish up more perks for adult guests than any other Disney ship to date, and as soon as our kids discovered the Oceaneer Club – the ship’s onboard space for three-to-12-year-olds, where you can “drop” them off via a tube slide that descends from the Grand Hall to multiple themed play zones – Javier and I might as well have been on our own solo getaway.

From Deck 13 at the adults-only Quiet Cove, reserved for guests 18 and older, we read magazines while watching the ocean rush by below. Then we’d catch wind of an upcoming meet-and-greet with a character the kids couldn’t miss and pick them up to be regaled with stories about the Star Wars-themed playroom or how Goofy had already popped by.

At Castaway Cay, Disney’s private island in the Bahamas, we coaxed them ashore for a few hours of beach and waterslide fun before they caught wind that there was a shore-based “camp”, too. They spent an hour playing while Javier and I rented bikes to pedal along a paved path that cuts through the island to a lookout tower, where he spotted wild orchids growing in the tangle of scrub bush at its base.

Back on board, I was starting to feel exhausted by all the stimulation, and Javier’s limited prior exposure to the Disney universe proved to be an asset. I finally reached my threshold for ambient noise over dinner one night at the Worlds of Marvel dining experience. But Javier, for whom themed dining had become a reality only since moving to the US, was fully into it, picking up my unenthusiastic slack.

As a respite, we booked the late seating for an adults-only dinner at Palo Steakhouse, a mainstay on all Disney ships. The four-course Italian-inspired dinner landed plate by plate as a young server from South Africa regaled us with stories of his adventurous world travels between cruise contracts.

Javier told him how lucky he was to be able to get out and see the world at such a young age – even if mostly through the porthole of an undoubtedly intense onboard work schedule – something that had never been an option for him growing up in Cuba.

The three nights passed in a blur of non-stop entertainment, including the Broadway-style Little Mermaid stage show in the 1,274-seat Walt Disney Theater and a pirate-themed night on the main deck that ended with fireworks and a very realistic Jack Sparrow. None of us was ever asleep before 10pm, the kids immediately crashing like dead weight into bunks suspended from our snug stateroom’s ceiling.

When we awoke on our last morning to find the boat already docked in Port Canaveral, tears flowed. After breakfast, Javier pulled the kids out onto the main deck for one last photo together.

And so were we. You’re never too old to have fun like a kid.