His Majesty Sultan Haji Hassanal Bolkiah Mu’izzaddin Waddaulah ibni Al-Marhum Sultan Haji Omar ‘Ali Saifuddien Sa’adul Khairi Waddien, Sultan and Yang Di-Pertuan of Brunei Darussalam’s personality and leadership as a wise and people-oriented king was evident during the get-together ceremony for the Temburong District in conjunction with His Majesty’s 75th birthday celebration, as thousands of residents waited patiently to meet and greet the beloved monarch yesterday.

The inseparable and strong bond between His Majesty and his people, as seen during the ceremony where His Majesty interacted with people from all walks of life symbolised the strength of the monarchy and the people’s bond.

Despite the ceremony being held in the new normal, as the country takes precautionary measures to curb the spread of COVID-19, the atmosphere for this year’s ceremony at the Green Jewel of Brunei was no different from previous ones as residents looked forward to the annual tradition, and the golden opportunity to greet their beloved monarch.

A cross-section of people interviewed by the Bulletin expressed their gratitude and excitement as they had been waiting for the moment to come as last year’s ceremony was cancelled due to the pandemic.

Padan bin Lasong, who hails from Kampong Parit and is the Cultural Head of the Brunei Lun Bawang Murut Association, said the get-together was an opportunity for the Murut community in Temburong District to deliver their greetings to His Majesty on his birthday, while showcasing the association’s efforts in preserving their cultural tradition such as their traditional welcoming dance performed for His Majesty. 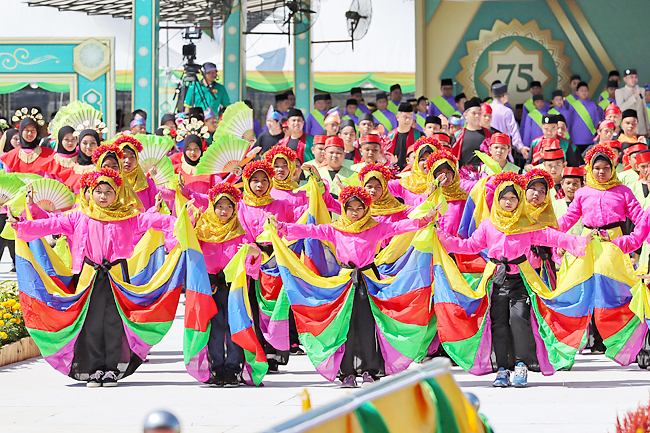 Representative of the of Retired Personnel of the Royal Brunei Police Force (POLSARA) Temburong Haji Abdul Halim bin Haji Ahmad said he was moved by Brunei’s success in curbing the spread of COVID-19 under the wise leadership of His Majesty, and as a result, being able to celebrate the royal birthday in near normal conditions. “We are extremely grateful to be here to enliven this unique traditional event, which symbolises Brunei as a peaceful and harmonious country.”

Deputy Commandant of the National Service Programme (PKBN) Training Camp in Batu Apoi Major (Rtd) Sopian bin Haji Mohammad Yasin said their involvement, including PKBN alumni in the ceremony this year was a testament to their commitment to community service and assistance to ensure the smooth running of the event. He also expressed his gratitude to His Majesty for his caring and wise leadership that focusses on the people’s welfare.

Head of the Royal Brunei Police Force (RBPF) Public Relations Unit DSP Mohammad Amiruddin bin Haji Tunjang, who is also the Secretariat of the RBPF Neighbourhood Watch, shared the same sentiment, saying they are honoured by the opportunity to meet His Majesty.

“The event is very unique and I am amazed by the strong bond between the king and his people. His Majesty is a caring leader who is always concerned with about welfare of citizens and residents in Brunei, which makes him different from other world leaders.”

Temburong resident Sulaiman bin Burut also expressed his appreciation for being able to meet His Majesty along with his family, adding that the event provided them a platform to have a closer interaction with the monarch.