THE STAR – Last year, Rashwin Kalithas, five, gained a spot in the Malaysia Book of Records (MBR) for naming 98 flags in nine minutes and 54 seconds, the most number of international flags identified by a child with autism.

On November 7, the Selangor-based boy added another feather to his cap by gaining another entry in MBR for being the youngest autistic child to hold a solo digital arts exhibition.

Recognising Rashwin’s talent means a lot to him and his family. His mother, Krishnarani Balakrishnan, 39, is thrilled with her son’s MBR recognition.

“I am incredibly proud and amazed by Rashwin’s talents. Words can never describe our happiness. My husband and I want to showcase his unique talent. But, most importantly, we want autism to be seen as part of him.

“We want to break the misconception or negativity surrounding people with autism. MBR has given us a platform to achieve our goals,” said Krishnarani during a recent phone interview from Semenyih, Selangor.

The gifted child’s month-long exhibition, The World Through His Eye: Immersive Visual Experience, was held at the Digital Art Gallery by Filamen in Kuala Lumpur in June. 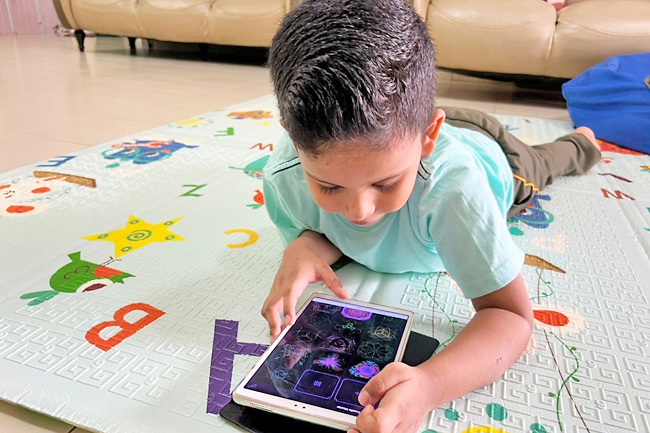 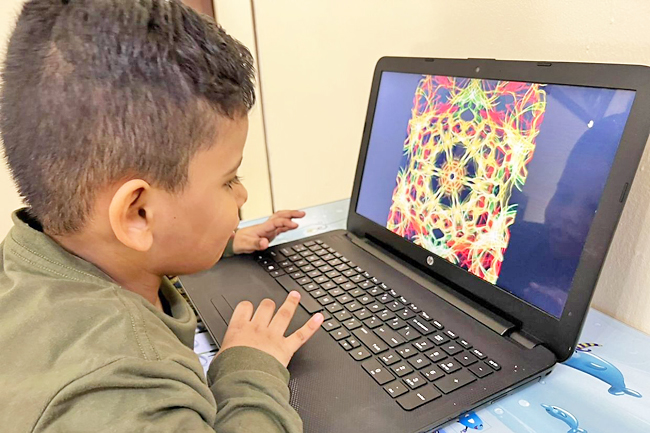 “His best designs were then presented to various galleries and Filamen was happy to showcase his works. His art exhibition attracted thousands of visitors and received many views on social media. We then presented this success to MBR. That was followed with an official endorsement from Filamen and National Art Gallery to confirm that Rashwin is indeed the youngest Malaysian with autism to have held a solo digital art exhibition,” Krishnarani shared.

Rashwin was diagnosed with Autism Spectrum Disorder (ASD) when he was 20 months old.
But thanks to early intervention therapy and support from his family, he has managed to bloom into a talented and upbeat young child. According to Krishnarani, her younger son is much more responsive and confident and can follow simple instructions.

“Rashwin is a child with low-functioning autism. But, on the other hand, he has an incredible photographic memory and a high vocabulary beyond his age.

“He can easily name things around him, memorise places and directions. He could read when he was just two. His biggest interest was going through the world flags. He knows how a laptop functions and can handle Microsoft word because the keyboard usage fulfils his sensory needs,” the mother of two said.

Rashwin developed an interest in digital art drawing when he was three.

“Rashwin loves vibrant colours, strokes, lines, dots and galaxy-like artwork. He could complete all of this through digital art with animated movements. Creating digital art images gives him immense joy. It all started with a simple android drawing app and he managed to quickly grasp the settings, selections and changing the colour pallets,” said Krishnarani, who shares her journey in raising Rashwin on her Facebook.

According to her, Rashwin did not attend any special classes to produce his intricate digital art designs. In the last two years, he has accumulated thousands of patterns in his hard drive, she added.

“It’s jaw-dropping to see how his mind works, so we explored all the possible ways to showcase his talent. In April, we had the opportunity to showcase his works at Sunway Putra’s Autsome Bazaar. In May, he also won a consolation prize at SP Setia’s Setia Karya hotel art competition and, finally, his solo art exhibition was held in June,” the proud mother explained.

Krishnarani quit her job as an operations manager at an insurance firm to care for her son.

Raising a child with autism comes with challenges, but Krishnarani accepts it as a work in progress.

“It can be exhausting, especially when he has a bad day, where nothing you do is right, and there are frequent meltdowns. But, we let those moments pass and will get our minds back to focusing on the life we have.

“I keep reminding myself that the same child also often surprises us by achieving something new that makes us proud of him. To most people, it may seem like a minor achievement, but for a child with autism, it is a massive deal!”

She hopes people will be more accepting of people with special needs and accept them with open arms.

“The ultimate challenge is to move away from the mindset of looking for a cure and accepting children with autism for who they are. Thankfully, we have moved away from the denial phase and have now started to embrace his autism.

“Rashwin still has a long journey ahead, and we are focusing on his life skills. We want him to live his life with minimum supervision. Concurrently, we also have plans to explore ways to secure his future in this field by giving him or even us, proper training in digital art. We want him to hold on to this skill when he is older,” she said.