THE WASHINGTON POST – With her shock of black-and-white hair and crimson colour scheme, Cruella DeVil is one of Disney’s most durable villains. She made for a terrifying antagonist in the delightful 1961 animated film One Hundred and One Dalmatians, and gave Glenn Close some delectable scenery to chew in 101 Dalmatians, an otherwise forgettable 1996 live-action version. Now, Emma Stone tries her hand at playing a would-be puppy killer in Cruella, an origin story that achieves the dubious feat of being tedious, transgressive, chaotic and inert at the same time.

It should surprise no one that in Cruella, it comes to light that Cruella’s mean-spiritedness and Dalmatian-hating tendencies have their roots in a primal loss – here, the result of a Disney-esque momicide. As an orphan running amok on London streets in the early 1960s, young Cruella is still known by her birth name, Estella, and harbours dreams of becoming a fashion designer while pulling petty heists with the good humoured ne’er-do-wells Horace (Paul Walter Hauser) and Jasper (Joel Fry). When a chance encounter results in Estella becoming an apprentice to a revered designer named the Baroness (Emma Thompson), she finally gets a chance to let her gifts emerge; she also learns that creative genius and bad behaviour are joined at the perfectly sheathed hip.

Driven by an over-insistent soundtrack that ranges from the Beatles, Stones and Supertramp to Nina Simone and Blondie, and drawing inspiration from English fashion trends spanning Carnaby Street boho chic to the trashed-out aesthetic of Malcolm McLaren and Vivienne Westwood, Cruella isn’t a movie as much as it’s a mood board come aggressively to life. This makes for some admittedly spectacular set pieces, especially when they revolve around Jenny Beavan’s wildly imaginative costumes and Tom Davies’s divine eyewear.

Channeling the haughty couture of The Devil Wears Prada and Phantom Thread – with a dash of Scott Rudin thrown in for toxic measure – Thompson plays the Baroness with sang-froid bordering on psychopathology: In one scene she slashes Estella’s hand and instead of apologising, simply directs her fabric department to match that precise shade of red.

As witheringly funny as Thompson is in Cruella, finding humour in abuse of power feels queasily out of step with the current moment (op. cit., Rudin). Things get even trickier when it comes to the title character, who despite Stone’s best efforts never becomes more interesting than just a nasty-natured person awash in self-pity and revenge.

Taking a page from Joker” here and Suicide Squad there, director Craig Gillespie (I, Tonya) and his team of screenwriters want to ground their antiheroine’s antisocial rage and violence in psychological loss. But, surrounded by characters who are just as unpleasant as she is, Stone’s Cruella simply becomes one more person behaving badly in a story overstuffed with incident for its own sake.

But whatever good intentions were brought to bear in Cruella are lost in an overlong, awkwardly shaped mash-up of coming-of-age drama, caper flick, action adventure and fashion world sendup. The constant barrage of needle drops from classic rock songs results in feeling bludgeoned into submission by a movie constantly trying to prove its hip bona fides. The climactic reveal of Cruella’s most notorious design (involving those Dalmatians and a showstopping coat) is first staged as an act of punk-rock subversion and ultimately as a brand-saving, “Who me?” hoax.

Such is the challenge of Cruella: making a charmless figure at least sympathetic enough to care about watching, while softening her most inhumane actions only as much as the original character will bear. It’s not an easy needle to thread, especially in an atelier as miserably misanthropic as this one. 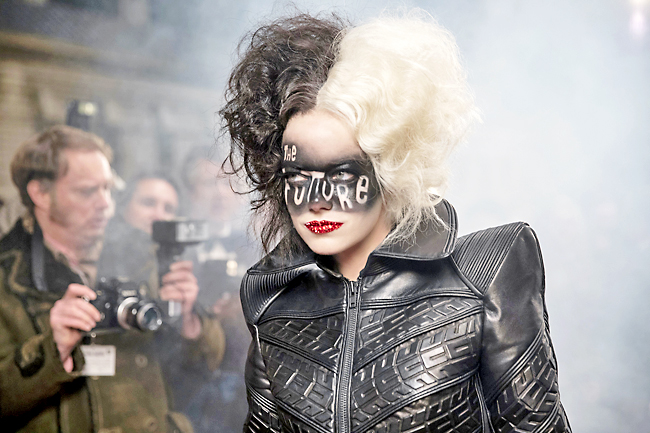