ANN/KOREA HERALD – In Singaporean film director He Shuming’s debut Ajoomma, the description of ajumma, a Korean term for middle-aged women, is somewhat different from what Koreans understand it to be.

The film centres on a widowed housewife played by Singaporean TV actor Hong Huifang, who steps out of her comfort zone by making a trip to South Korea by herself. During her trip she embarks on a journey of self-discovery and strikes up an unexpected friendship.

The director said he wanted to give a more positive spin to the negative connotation of the
word ajumma.

“Ajumma is not just a way to describe a middle-aged woman, but socially, ajumma are considered with certain traits; aggressive and a little afraid of how others look at her. The film wants the audience to rethink the term and really embrace the ajumma part of them,” He told the Korea Herald in a Zoom interview from Palm Springs, California, where he was attending the 2023 Palm Springs International Film Festival.

The protagonist was inspired by his mother, He explained. “Reflecting on my relationship with her, I wanted to show what a mother can do to move out of her comfort zone. My mom definitely tries to put herself out there,” He said.

“Film has a universal theme. Through the movie, I came to understand why my mom does certain things. It’s nice that the film transcends the cultural barriers.” 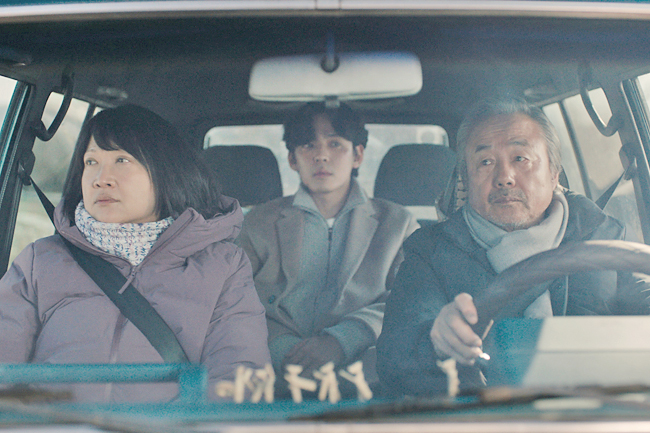 The film opened in Singapore in October last year. In Korea, the film is expected to be released this year after it premiered at the Busan International Film Festival last October.

It was the first Singapore-South Korea co-produced film, funded by the Singapore Film Commission and Korean Film Council.

In the film, the Singaporean ajumma fills the void in her life by binge-watching Korean TV dramas – not uncommon for either Koreans or people in other countries. “I have always known the power of Korean dramas. I understood the popularity of Korean drama. My mom is a huge follower of Korean dramas, watching three to four shows at the same time. That was the beginning of how I started this film,” he said.

When asked why Korean dramas pull people in, He said the in-depth storylines and characters are woven together well with high-quality production.

“I think in my observations of Korean dramas, the storyline that characters go through is very elevated, slightly over the top, and offers an escape for the audience.

“For example, melodramas bring out certain true emotions and feelings, allowing you to understand the feelings in your own life,” he said.

“I’m sure that the beauty of Korean drama is that it can connect people around the world.”

The director recalled meeting festivalgoers from Saudi Arabia last week who had flown into California to watch his film at the Palm Springs International Film Festival. The Saudi fans turned out to be fans of Korean heartthrob Yeo Jin-goo, who makes a cameo in Ajoomma.

He said he was fascinated by the influence that K-dramas have globally.

He also said working with Yeo was a pleasure.

“Yeo was very professional. I understand why he is regarded as Korea’s son.

“He appeared as cameo, but he understood what the film is about and what he is playing. I could see how much effort he put into it,” the director said.

“He punctuates the film. He tells and helps the audience dive into the journey along with ajumma.”

The film also sheds light on the cross-culture friendship of its Singaporean ajumma and a Korean security guard played by Jung Dong-hwan, telling a story of two seniors’ understated closeness. “I wanted to show the possibility of friendship even later in life.

Making new friends can be scary for people like ajumma.

“I think the film shows an experience that anyone can go through in one’s life, and it’s just very sweet to watch the two strangers overcoming language – the two communicate mostly through a mix of gestures and broken English – to become friends and leave the possibility of a little romance up to the imagination of the audience,” said He.

After receiving global recognition and awards at international film festivals, including winning the best film award at the Red Sea International Film Festival, Ajoomma was selected as Singapore’s entry at the Oscars, but failed to make it to the shortlist in the non-English film category.

“It was just an eye-opening experience for me. I joked with my Korean actors how am I going to beat Park Chan-wook? I’m just so happy to be shortlisted for the whole process.

So many wonderful films are out there. I think our film is a very lighthearted film. I think it’s warm and feels nice.”