THE WASHINGTON POST – “The CAT is back. Le CAT est de retour”. The bilingual marketing for the high-speed ferry is unavoidable as I plot my 10-day trip to Nova Scotia. But why is it called the CAT? Cats hate water, don’t they?

Only when I drive our car into the Bar Harbor departure terminal and see the boat do I understand: CAT means a giant catamaran propelled not by traditional shaft propellers but with jet engines. It is now “back” after a pandemic-caused hiatus – and no longer at its old home berth farther down the Maine coast at Portland.

The CAT’s high speed means that the 98 nautical-mile passage from Bar Harbor to Yarmouth takes only three hours, crossing the Gulf of Maine, one of four distinct bodies of water that surround the Canadian maritime province.

The others are the Bay of Fundy, the Gulf of St Lawrence and, of course, the Atlantic Ocean. With a resulting 10,000 miles of coastline, Nova Scotia is billed as ‘Canada’s Ocean Playground,’ and no place in the province is more than 50 miles from the coast. My intention is to test the waters.

Will they be healing waters? Given the war in Ukraine and other despondency-inducing current events, I feel a bit like the narrator Ishmael in Herman Melville’s Moby Dick. To escape the “November in my soul”, he seeks “the watery part of the world”. I’ve always found solace in swimming and boating, indeed all aquatic pursuits, and the waters don’t have to be warm (as they surely aren’t in Nova Scotia) to be therapeutic. 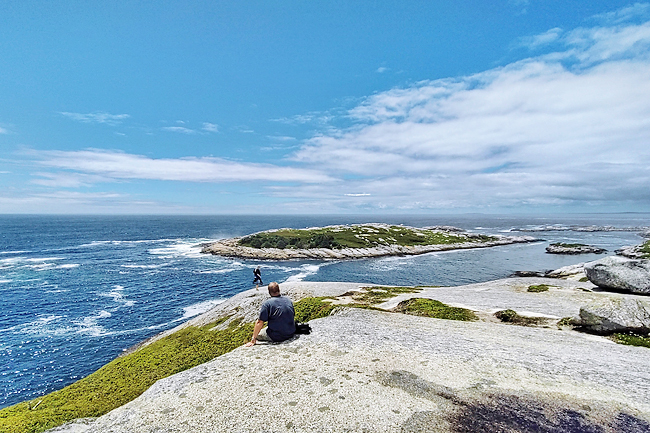 We’ve lost an hour travelling from the Eastern to the Atlantic time zone. The place I’ve booked for the night is a couple of hours away, along what’s called the Yarmouth-to-Halifax “Lighthouse Route”. The rental cottage is not coastal but lakeside; in Nova Scotia even the land’s interior boasts bodies of water. There are over 6,000 lakes with surface areas greater than 2.5 acres, according to the Nova Scotia Department of Environment and Climate Change.

The often-memorable names for Nova Scotia’s bodies of water reflect the land’s settlement history: From the First Nation Mi’kmaq word Kejimkujik (meaning “tired muscles from canoeing”) to the French Barachois (coastal lagoon) to the Scottish Loch.

Most of the lakes are glacial in origin. As recently as 15,000 years ago, the land that the British would christen with the Latin equivalent of “New Scotland” lay under ice up to a mile thick. The now-liquid lake over which our cottage is perched lies in the wonderfully named Whynotts Settlement, just outside the old port town of Lunenburg.

Established in 1753 by Britain to assert control over land claimed by both Indigenous people and the French known as Acadians, Lunenburg has been designated a UNESCO World Heritage Site for retaining the original layout and appearance of its British colonial settlement.

After a good night’s rest on the soothing shores of the small lake, my wife, Pat, and 25-year-old son Thomas (visiting from Hawaii) want to see the 1800s vernacular architecture for which the Lunenburg waterfront is famous. The picturesque fishing village of Blue Rocks, less than four miles seaward, also beckons. Then we head further up the coast toward Halifax, where another fishing village, Peggy’s Cove, is so picturesque that it’s typically clogged with tourists.

Just a few miles farther, but far from the crowds, we reach the secluded waterfront cottage that we have booked for a full week – our lily pad from which to make exploratory hops.

The water here is known as the Northern Arm, a jagged inlet off the Atlantic Ocean. The cottage has a dock for boating and swimming, which floats up and down with the incoming and outgoing tides. To paddle around, we rent a canoe. At the property’s entrance is Black Duck Run, which feeds into the Northern Arm. But at high tide, the creek flows upstream, as if backward, and broadens into a brackish pond.

The tide differential averages three to four feet, and the water is chilly, somewhere in the 60s. But I find it slightly less chilly if I take a dip as the tide goes out.

Still, I stay in the water only a few minutes, just long enough to swim to a rock outcropping revealed at low tide. Later in the day, as the rock becomes even more exposed, it serves as a favourite perch for a loon.

For Thomas, who is a big-wave surfer on Oahu’s North Shore, the water is never too cold as long as he’s surfing. So he takes the car and heads for a surfboard rental place on Lawrenceville Beach, a few miles northeast of Halifax.

Afterward, he reports that the waves are just “OK” (compared with Hawaii), but still interesting and fun: A beach not of sand but of pebbles and cobbles, framed by pines instead of palms.

For Pat and me, our exhilarating waterborne adventure will be rafting the Bay of Fundy’s tidal bore as it roars up the rivers feeding the bay.

Thomas will join us, of course, anticipating an adrenaline rush similar to surfing. We make reservations for a two-hour tour the next day on the Shubenacadie River, on the opposite, northern side of Nova Scotia from our cottage, but only about an hour’s drive away.

Boarding the inflatable raft, equipped with a powerful outboard motor, is timed to the low tide that afternoon.

It’s so low that the riverbank is a mud flat, and we slip and slide our way to the water. Our raft is one of three, with each holding a maximum of eight people, plus a guide manning the outboard. As we motor downriver, two bald eagles soar above us.

The Bay of Fundy, known for the world’s most extreme tide fluctuations, is shaped like a long funnel. As the incoming tide is forced into the bay’s ever narrower, shallower upper reaches, it collides with and reverses the river currents running downstream. The result is a huge cresting wave called a tidal bore – from the old Norse word bara, meaning “first wave.”

The guide at the raft’s helm expertly heads into the wave’s face, then zooms back and forth, creating the sensation of riding a very bumpy roller coaster.

Everyone gets splashed, even soaking wet; some scream with delight; no one falls overboard, though that often happens (why life jackets are required). The standing waves are equivalent to a class-three-or-four white-water rapid.

Sharing our raft are giddy members of a bachelor party joking with the groom while firmly clasping the bouncing boat’s safety lines. Pat, speaking from experience, joins the banter, “Marriage is like riding the tidal bore, up and down and wildly unpredictable”.

At trip’s conclusion, shivering, we’re offered outdoor showers to wash off the mud before changing into dry clothes. Hot water spraying from the shower head has never felt so good.

Thrills can best be savoured in retrospect, so the next couple of days at our waterfront cottage seem especially restful and reflective. Relaxing in an Adirondack chair overlooking the dock, I can’t help but hear Otis Redding playing in my mind: Sittin’ in the mornin’ sun/I’ll be sittin’ when the evenin’ comes. I also reflect upon the notion of Lebenskunst (“the art of living well”), since the cottage owners are Swiss German.

The water here is never the same. When the prevailing southwesterly winds align with the rising tide, the surface texture ripples, no longer smooth.

There’s even an occasional whitecap. And the blue water always changes its hue, gradually, then suddenly, depending on the colour of the sky and angle of light.

When fog slides in from the sea, the rocky shoreline’s sharp shapes soften, as if covered by a wedding veil.