The Embassy of Oman in Brunei Darussalam, in coordination with the Diplomatic Corps, hosted a farewell dinner in honour of the outgoing Ambassador of Oman to Brunei Darussalam Sheikh Ahmed bin Hashel Al-Maskari at the Empire Brunei yesterday evening.

The Indonesian Ambassador to Brunei Darussalam Dr Sujatmiko in his capacity as the Deputy Dean of Diplomatic Corps expressed farewell wishes on behalf of the diplomatic community and congratulated the departing envoy for his productive tenure.

Sheikh Ahmed reminisced over his tenure in Brunei and its natural beauty, cultural diversity, colourful lifestyle and hospitable people.

“The bright smiles and sincere greetings of my Bruneian friends always made me feel at home,” he said, adding that he and his wife will miss Brunei’s get-togethers and ceremonies, as well as the delightful atmosphere of the Hari Raya celebration.

The outgoing envoy said his nearly nine years stay in the Sultanate will remain as wonderful memories in his life. 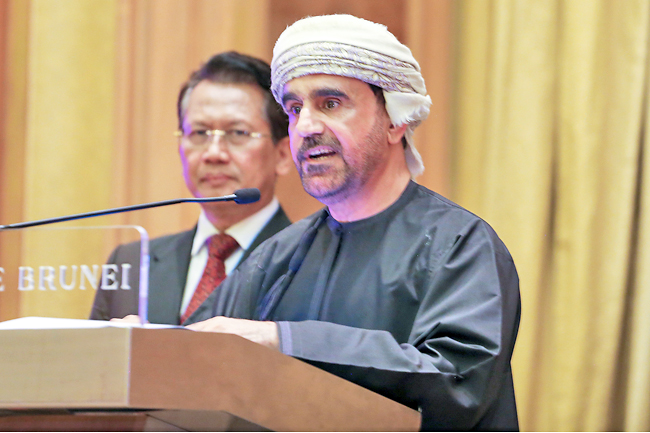