SAO PAULO (AP) – Trumpets and snares will play Brazil’s national anthem at Luiz Inácio Lula da Silva’s swearing-in on January 1. Then, one will hear a different song on the streets, its lyrics taking a shot at outgoing President Jair Bolsonaro.

When Lula clinched his election win over Bolsonaro on October 30, tens of thousands of people sang the familiar tune throughout the night, pushing the song to the top of Spotify’s list in Brazil and showing one way that many Brazilians aren’t ready to extend olive branches.

Healing Brazil’s divided society will be easier said than done. Lula’s Cabinet appointments thus far favouring leftists and stalwarts of his Workers’ Party are turning off those who trusted the divisive 77-year-old to govern alongside moderates, and who joined forces after Bolsonaro repeatedly tested the guardrails of the world’s fourth-biggest democracy.

“Governing Brazil means deals with agribusiness, evangelicals, former Bolsonaro allies. It can be frustrating for half-hearted Lula voters, but that’s what they have before them,” said political science professor at Insper University in Sao Paulo Carlos Melo.

Of course, Bolsonaro’s far-right backers are hardly the picture of post-election bonhomie.

Many reject results of the vote and remain camped outside military buildings nationwide, demanding that Lula’s inauguration be impeded. 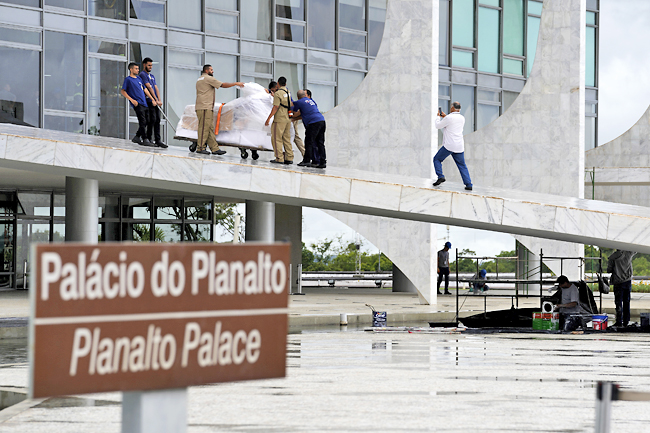 Brazil’s October election was its closest in more than three decades, pitting two arch-rivals against one another. In Lula’s victory speech on October 30, he declared that “there are not two Brazils”, as tens of thousands gathered outside his hotel in Sao Paulo to celebrate his victory and Bolsonaro’s defeat.

A hopeful sign for Lula’s bridge-building ambitions came days later, with leftists and moderates once again donning the nation’s yellow football jersey to cheer on their team at the World Cup. The shirt for almost a decade has been an anti-left symbol and often featured in protests against Lula and in favour of Bolsonaro.

Lula and his allies wore the yellow shirt, too, in an effort to reclaim it; he posted photos of himself to social media, and said green and yellow “are the colours of 213 million people who love this country”.

“Before the World Cup I would sell on average six blue shirts and four yellow out of every 10,” Gaspar, 43, said on December 4. “Now it is almost all yellow.”

Football was a short-lived unifying force. Brazil exited the tournament earlier than expected after a surprise penalty shootout loss to Croatia in the quarterfinals, and most Brazilians stuffed their jerseys back in their drawers. Bolsonaro’s backers are the only ones still sporting the national colours.

Lula has avoided inflaming tensions, mostly refraining from public attacks against Bolsonaro or his supporters, and instead focussing speeches on helping the most disadvantaged Brazilians once he returns to the office he held from 2003 to 2010. At times, though, us-versus-them comments have slipped past his lips. On December 22, while announcing new ministers, he said Bolsonarismo remains alive and angry among those who refuse to recognise the electoral loss, so it must be defeated on Brazil’s streets.

Chairwoman of Lula’s Workers’ Party Gleisi Hoffmann said building a Cabinet would be a challenge even if Lula were only selecting progressives. Complicating decisions further is the fact that some would-be ministers are likely 2026 presidential candidates, as Lula has indicated he won’t run for re-election.

“We have our differences within the Workers’ Party, now go figure what happens when we bring a dozen other parties,” Hoffmann said on her social media channels December 16. “It is a puzzle, it takes time.”

That may help explain why the number of ministries will nearly double, to 37.

Centrist endorsements from former environment minister Marina Silva and Simone Tebet, who finished third in the presidential race’s first round, brought in votes from Brazil’s moderates – a demographic that grew leery of Lula since the sprawling Car Wash corruption probe landed him in jail in 2018. With their support, he beat Bolsonaro by less than two percentage points. Many expected them to be quickly announced as ministers, but negotiations have dragged on.

Political consultant Thomas Traumann said delays reflect the fact the president-elect has had a central role in negotiations for positions.

“People who helped him like Marina and Simone will have less stature than they would have had they been appointed shortly after he won,” Traumann said. “Lula’s luck is that moderates will view his administration like many leftist Democrats see (United States President Joe) Biden: they might not like what they see, but it is better than the alternative.”

Biden’s attempt to bridge the political chasm could offer an instructional, albeit dispiriting, model, said professor of communication at Missouri State University Brian Ott who has researched the stratifying impact of social media on American political discourse.

Early in his presidency, Biden did not shy away from the fact that he was governing in a polarised country and played up his bonafides as a throwback to a different era when Democrats and Republicans could battle on the Senate floor before repairing to the dining room to hammer out compromises.

“The problem that Biden faces and the problem that politicians face in 51 per cent countries like Brazil is there may no longer be smart strategies to deliver big tent messages without alienating your base,” said Ott. “We are now in a period where politics is so intensely, deeply divided culturally, where people don’t have to be exposed to different points.”

On December 22, Lula named 16 ministers, bringing his total thus far to 21. Neither Tebet nor Silva are among them.

“It is harder to assemble a government than to win elections,” he said while counseling his appointees to hire staffers from diverse backgrounds. “We’re trying to make a government that, as much as we can, represents the political forces that participated in our campaign.”

He added that people who helped and haven’t yet been named will be taken into account, and are owed a debt for “daring to stick their necks out to confront fascism”.

Still, many new Lula voters already feel inclined to jump ship. One is Thereza Bittencourt, 65, who spoke at a military club in Rio and said initial signs worry her.

“I took a lot of criticism from my friends at the club because I voted for Lula. All of them chose Bolsonaro. I told them the management of the economy would be better,” Bittencourt said as she sipped her caipirinha. “If I only see members of the Workers’ Party in the government, goodbye.”