XAPURI, BRAZIL (AP) – When Luiz Inácio Lula da Silva is sworn in as president of the second most populous country in the western hemisphere January 1, few challenges will be greater than fulfilling his promise to end all deforestation in the Brazilian Amazon by 2030.

To understand why, consider the vastly different visions of three daughters from one family of rubber tappers who live on a large reserve in the western state of Acre. The reserve is forest protected in the name of the legendary rubber tapper leader and environmentalist Chico Mendes.

Luzineide da Silva is a third-generation rubber tapper. One of her daughters wants to follow in her footsteps and make a living from the family fields, rubber trees and Brazil nuts, the other two want to cut down the forest, plant grass and run cattle.

“My eldest daughter was dazzled when she took part in a livestock training course. She learnt how to produce beef and cheese and even drive a tractor. That changed her worldview,” said da Silva at the end of a day tending her corn, pumpkin, watermelon, banana and gherkin crops under a scorching sun. “She said: ‘Mum, everyone who raises cattle has a car, a good life and attends private colleges, whereas I can’t afford veterinary school.”

It’s the same with other families. In the past two decades, many rubber tappers have gradually abandoned the vision of Mendes, who fiercely opposed deforestation by big cattle ranchers.

The forest defender was shot dead in his tiny home in Xapuri city here in Acre in December 1998. A local farmer had ordered the killing. The international outcry that followed led to the creation of “extractive reserves” across the Amazon, a type of federal conservation unit where forest communities could live their traditional lives protected from land-robbing. 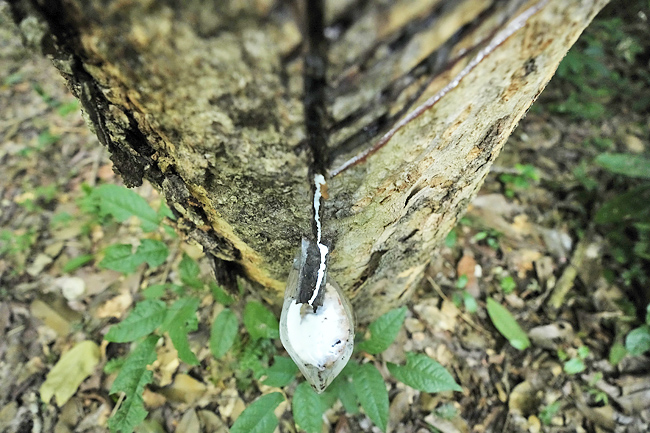 Classic rubber tapping is done by slicing grooves into the bark of rubber trees and collecting the latex that oozes out. But that artisanal rubber has fallen into decline over decades, a casualty of synthetic rubber made in chemical factories or rubber grown on plantations.

Finding few opportunities elsewhere, many locals cut down trees and turned to cattle as a more reliable income than seasonal forest products, such as Brazil nuts. Cattle became Acre’s most important economic activity.

In the last four years, this trend of converting forest into pasture reached unprecedented levels under far-right President Jair Bolsonaro.

His government tried to shrink protected areas and legalise large-scale cattle herds inside extractive reserves. Land-robbers from the neighbouring state of Rondonia illegally bought land parcels, even on public land. One of them deforested 104 hectares (257 acres), the largest swath of destruction this year, according to environmental law enforcement officials who spoke anonymously as they are not authorised to speak with the press.

Residents also cleared trees to lease the land to nearby cattle ranchers, who finance the destruction. There are even cases where traditional rubber tappers have used money earned from selling rubber to extend their grazing land. Others post ads on Facebook selling their traditional rubber groves.

“What strikes me is that when we had nothing, we were able to bring people together and fight the way we did”, Raimundo Mendes de Barros said while sitting on the porch of his wooden house, whose walls bear pictures of him beside Chico Mendes, who was his cousin, and Lula. All belong to the same party, the Workers’ Party. Thanks to the rubber tappers movement, he said, people now have roads and electricity, and walk around on an equal footing with city residents.

But “these improvements ended up benefitting evildoers”, Raimundo Mendes said. Many think that forest products and family farming are worth nothing and they need money to buy a motorcycle and a cellphone. They’ll sell a piece of their own rubber grove and deforest in order to raise cattle.

“We fought so hard and built so many good things, but people don’t care about it,” the 77-year-old rubber leader said.

The result is that an area roughly the size of Manhattan was destroyed during Bolsonaro’s presidency between 2019 and 2022. That’s triple the previous four years, according to an analysis by Socio-Environmental Institute, a Brazilian non-profit, based on official figures.

“In the past, the Chico Mendes reserve’s residents used profits from rubber and Brazil nuts to buy cattle as a sort of savings account,” Institute researcher Antonio Oviedo told The Associated Press in a phone interview. He said now it’s all on a much larger scale.

Most locals, however, don’t seem to view this forest loss as a problem – quite the opposite.

In the recent election Bolsonaro beat Lula by a wide margin here in Xapuri and throughout the six municipalities of the Chico Mendes reserve.

The broader state of Acre also hit an all-time high for deforestation in the past four years, according to official monitoring. Yet Bolsonaro beat Lula 70 per cent to 30 per cent. His ally, pro-agribusiness Governor Gladson Cameli, also was reelected in a landslide. It showed the long fade of the Workers’ Party’s years-long effort to implement a sustainable economy in Acre. It was also an indicator of the strength of agribusiness and the cultural changes in recent years across rural Brazil.

Acre is also the home of Marina Silva, a former environment minister being considered for the same job again in the new administration. Silva, too, is a former rubber tapper who fought deforestation alongside Mendes. A renowned forest defender worldwide, she has become very unpopular in her home state. Her political party, the environmentalist Sustainability Network, is almost nonexistent here – it doesn’t even have an elected councilmember.

Angela Mendes, daughter of Chico Mendes, said that to really halt deforestation, the incoming Lula administration will have to listen to the needs of smallholders who live from forest products like rubber, Brazil nuts, and açaí, and overhaul the federal agency in charge of running protected areas, the Chico Mendes Institute for Biodiversity Conservation.

“We still have a lot of forest standing,” she said during an interview in Xapuri. To ensure it stays like that, she said, it’s essential to find a pathway for people who live from the land.

“That is the only way to move forward.”