Did Harry Styles spit at Chris Pine at the premiere of their new film?

ANN/THE STAR – Fans frothing at the mouth for more drama from Olivia Wilde’s film, Don’t Worry Darling, spent their Monday poring over several angles of footage of its stars Harry Styles and Chris Pine (AP, pic below) at the Venice International Film Festival.

Convinced that the singer spat in the lap of his co-star Pine during the movie’s premiere, eagle-eyed social media users with way too much time on their hands replayed a brief clip that showed the alleged spit take while Styles took his seat in the Sala Grande.

The meme-generating moment left many wondering whether Styles did indeed send some saliva Pine’s way and fabricating a narrative between the Dunkirk and Star Trek actors.

“I won’t sleep until i know the truth,” one Twitter user quipped.

The clip showed Styles, 28, arriving to take his empty seat next to Pine, 42, who is smiling while joining Wilde and the crowd in applause. But as the former One Direction frontman readies himself to sit to Pine’s left, he briefly appears to pucker his lips. Then Pine looks down at his own lap and pauses for a moment, then appears to laugh.

There was no reaction from Wilde, who is dating Styles, but was seated to the right of Pine. The public-facing event that was probably meant to reset the discourse on the movie’s scandal-addled production continued to be a spitballing sport all over social media instead.

Pine’s rep has responded to this rumour telling People magazine: “This is a ridiculous story – a complete fabrication and the result of an odd online illusion that is clearly deceiving and allows for foolish speculation. Just to be clear, Harry Styles did not spit on Chris Pine. There is nothing but respect between these two men and any suggestion otherwise is a blatant attempt to create drama that simply does not exist.” 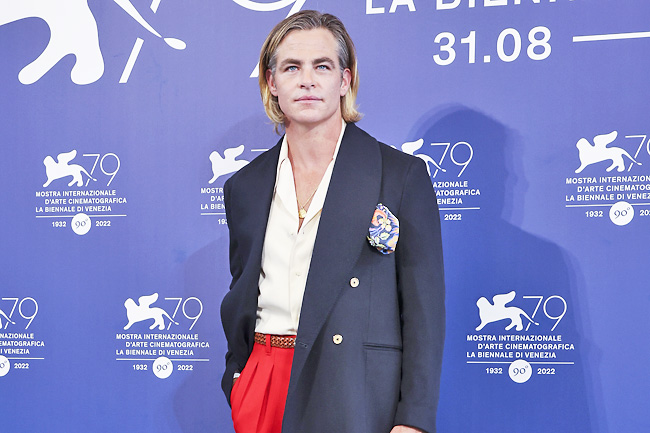