LONDON (AFP) – Princess Diana’s wedding dress for her 1981 marriage to Prince Charles was one of the best-kept secrets in fashion history.

The gown sparked such intense interest that young designers David and Elizabeth Emanuel locked the ivory silk dress, which had a 25-foot long train, in a safe at night.

Plucked from obscurity for the commission of a lifetime, the pair even took to putting dummy bits of fabric in the studio’s bins to throw anyone rummaging through them off the scent, according to an exhibition of royal fashion, including Diana’s iconic dress, that opened last Thursday.

The exhibition – Royal Style in the Making – at the Orangery at Kensington Palace, Diana’s home until her death in a car crash in Paris in 1997, focusses on the work of designers who dressed not just Diana but also Queen Elizabeth II, Princess Margaret and the Queen Mother.

Trimmed with vintage lace, pearls and thousands of sequins, the train of Diana’s dress was the longest ever for a British royal bride and memorably appeared crumpled as she emerged from her carriage at St Paul’s Cathedral.

Luckily, the designers were on hand to smooth it out. 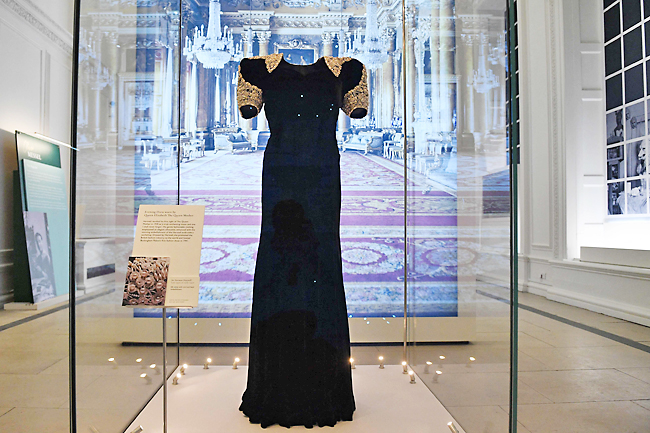 “I think it goes to show that you can plan for everything, but on the day there’ll always be something,” the exhibition’s curator Matthew Storey told reporters ahead of the opening.

“It’s a very big dress. It was a very small carriage,” he said.

In a video at the exhibition, Elizabeth Emanuel recalled Diana phoning to ask her and David to make the dress.

“It was one of those strange moments where you know your life is never going to be the same again,” she said.

The exhibition, which runs until January 2, chronicles some of the hard toil behind the dress, featuring photographs of the seamstresses as well as the keys for the safe where it was safely deposited nightly.

With her wedding dress “she kind of left it to us really”, Emanuel said.

But another designer she had a close relationship with, David Sassoon, lent the organisers archive documents that show her getting more involved.

She scribbled a comment on one drawing: “This in dark blue please” and in a handwritten letter asked for a dress pattern to be altered.

In another video, Sassoon recounted that Diana was “very shy” when they first met, but later became “very hands-on in selecting exactly what she wanted”.

She “understood what the public wanted from the clothes she wore”, he said, noting she “loved to break the rules”, often not wearing gloves or a hat, as royal protocol required.

Her sons Princes William and Harry loaned both Diana’s wedding and going-away dresses to the exhibition.

The creators said they did not know whether the pair would attend.

Diana would have turned 60 on July 1 and Harry and William are expected to unveil a long-awaited statue of her in a garden at Kensington Palace.