HONG KONG (XINHUA) – Many herbal teas sold around Hong Kong have Chinese herbal medicines as their major ingredients and have long proved to protect health from the local hot and damp weather.

The herbal teas, mostly based on recipes, are considered an outstanding example of the homology of medicine and food, a conception in traditional Chinese medicine (TCM).

Cheung in 2014 graduated with a second degree from School of Chinese Medicine of Hong Kong Baptist University (HKBU). The 34-year-old is now an assistant professor at the school’s clinical division.

“The TCM development in Hong Kong would have been impossible were it not for the policy support from the central government and the Hong Kong Special Administrative Region’s (HKSAR) government,” Li stressed. 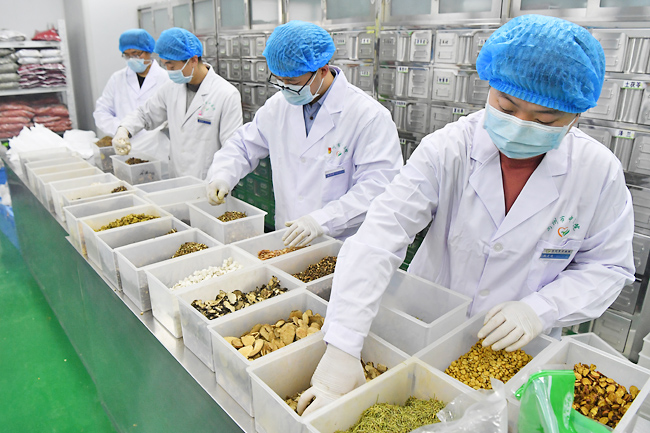 Regulations including a practitioner registration system and Chinese herbal medicine standards have been introduced in Hong Kong after its return to the motherland in 1997 to turn a wilderness of TCM into order. The moves have ensured higher quality TCM healthcare service for residents.

According to Li, over 900 students have graduated so far from the HKBU school of Chinese medicine after also receiving adequate Western medicine education, working as doctors, pharmacists, acupuncturists or nutritionists among others.

Li said the school’s students are required to memorise TCM classics for the fundamentals to stay alive and informed while clinical trainings punctuate their study from grade one to six including three months of specialty research and a one-year internship.

The school has a lot of TCM professors from mainland cities such as Beijing, Guangzhou and Nanjing. Cheung said his mentors had trained him to become a competent orthopedist while inspiring a sense of responsibility in him to carry forward traditional Chinese medicine.

“A life decided!” he said. Although local TCM practitioners earn less than their Western medicine peers, Cheung is proud he can often heal where Western medicine fails using bone-setting tui-na, acupuncture and other TCM techniques. “I have no regrets.”

In promoting TCM development, Hong Kong lays its focus on TCM modernisation and internationalisation, led by standardisation and innovation efforts.

Li had her TCM studies at two mainland universities and joined HKBU after obtaining a doctorate in biomedicine from Japan’s Tokai University. The professor, in her fifties, teaches on TCM internal medicine and focusses her research work on Parkinson’s and Alzheimer’s diseases. Her team has been developing new medicine based on ancient TCM formulas and has been granted several related patents.

It is about turning six herbal medicines into a new TCM pill, which is a small-molecule versatile organic compound, or a modern, new “bottle” – a process, according to Li, of exploring ancient TCM treasures, conducting interdisciplinary research, employing modern technology, and creating a new solution.

However in developing new TCM drugs, Li urged an equal commitment to finding the disease mechanism, noting, “the TCM principle of syndrome differentiation and treatment should never be waived”.

Li said Hong Kong’s big advantage in TCM innovation lies in it being a multicultural society featuring openness, inclusiveness and global thinking, which she defined as key factors, on top of extensive research cooperation, in promoting an effective understanding, study and application of TCM worldwide to benefit the whole of mankind.

In Hong Kong, the first half of 2022 saw Chinese medicine play a huge role in containing an aggressive fifth wave of the COVID-19 pandemic, making another achievement after helping defeat the 2003 SARS outbreak.

From February to May, the HKBU school of Chinese medicine alone provided a free online service for over 41,000 people with confirmed cases while prescribing and distributing over 170,000 doses of herbal drugs, data showed. Moreover, it had run the Kai Tak care centre for the HKSAR government, providing inpatient service for more than 130 infected elderly people.

While cherishing the memory of his experience of both events, Cheung said he now looks forward to working with his schoolfellows in Hong Kong’s first TCM hospital.

On June 2, a groundbreaking ceremony was held for building the Chinese Medicine Hospital and the neighbouring HKSAR Government Chinese Medicines Testing Institute, marking a new milestone in the local TCM development.

The projects are planned to be completed in 2025, and the HKBU school of Chinese medicine has been commissioned by the HKSAR government to operate the hospital in partnership.

Currently running 10 clinics of its own, the HKBU school of Chinese medicine has been both witness and contributor to the expanded coverage of TCM community service in Hong Kong. Among the clinics, Lui Seng Chun in Kowloon reports a daily average of 75 outpatient visits with up to four practitioners working at one time. By the end of November this year, it had received some 550,000 visitors since starting operation in 2012, showed HKBU data.

However, the visitor arrival figure owes almost half to tourists attracted by the revitalised four-storey Tong Lau, a Hong Kong monument. The building completed in 1931 boasts a cultural charm in part by mixing Chinese and Western construction styles.

Its ground floor had hosted a drug store selling a well-known TCM bone-setting potion, and now there is a stall, with three gourd-shaped big bronze teapots on the counter, selling herbal teas, including at least two of HKBU professor’s new recipes.

“What a site of multicultural heritage!” Li asserted. Apart from consulting rooms, the Tong Lau’s top two floors also have display boards set up along the corridor, telling of the evolutions of Lui Seng Chun as well as a new era of TCM development in Hong Kong rolling out.