A wagon was yesterday found completely charred, believed to be the result of a detonated self-made explosive device. The driver was found dead, and efforts were in place to identify the victim.

The ‘incident’ was part of the scenario for the 4th Live Blast and Post Blast Investigation Training Exercise Solar IV Brunei Darussalam between the RBPF and Singapore Police Force. The two-day training started on October 1.

As part of the exercise, the Royal Brunei Police Force (RBPF) received a distress call at 10.30am reporting the sound of an explosion, and smoke bellowing from a junction area in the Tutong District.

Fragments from the explosion were collected and examined.

The exercise was held at Binturan Shooting Range in Tutong. 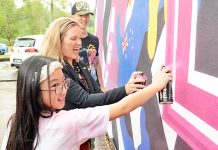