CAPITOLA, CALIFORNIA (AP) – Hurricane-force winds, surging surf and heavy rains from a powerful “atmospheric river” pounded California yesterday, knocking out power to tens of thousands, causing flooding and contributing to the deaths of at least two people, including a toddler whose home was crushed by a falling tree.

Raging seas damaged two historic piers, rock and mudslides closed down highways and deep snow piled up at ski resorts in the latest in a series of atmospheric rivers, long plumes of moisture stretching far over the Pacific to reach the drought-stricken state. The “Pineapple Express” storm originated near Hawaii and was pulled toward the West Coast by a rotating area of rapidly falling air pressure known as a “bomb cyclone”.

Even as rains were expected to let up and some evacuation orders lifted on Thursday, crews were assessing damage, trying to restore power and beginning the clean-up while bracing for more wet and wild weather this weekend that could be particularly troublesome for communities along swollen rivers.

According to poweroutage.us, the blustery tempest that came ashore on Wednesday knocked out power to more than 180,000 homes and businesses.

Authorities said, in Sonoma county, Aeon Tocchini, a two-year-old boy, was killed when a redwood tree crumpled a section of his family’s mobile home where he had been sitting on a sofa. His father and neighbours freed the boy, nicknamed “Goldie” because of his light hair and sunny personality but he couldn’t be revived.

His teary-eyed grandmother, Aileen Tocchini said, “He was the happiest child, always smiling and encouraging people. He was a love, an angel.” 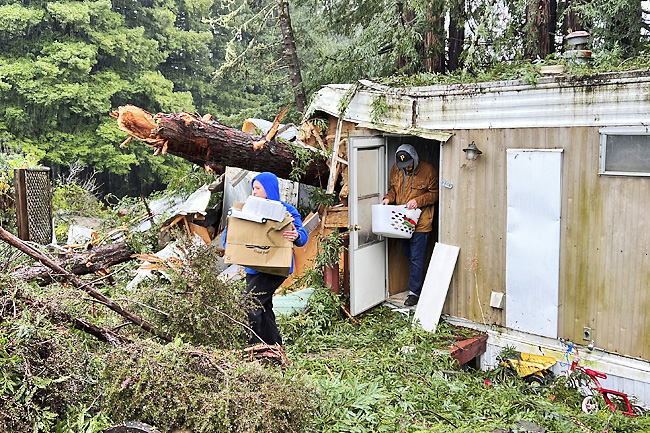 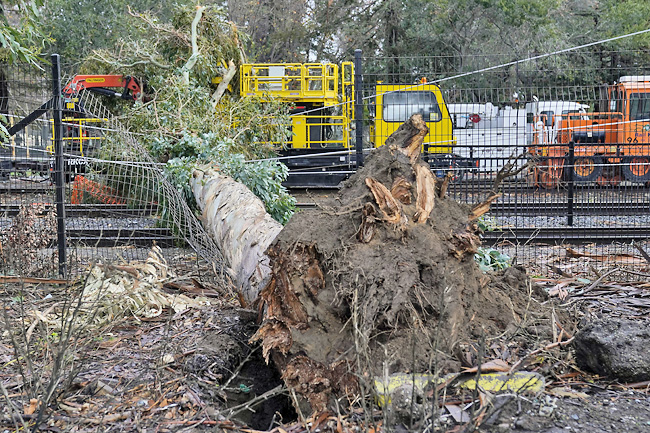 Police said on Facebook, in Fairfield, a 19-year-old woman died after her vehicle hydroplaned on a flooded road and hit a utility pole.

The seaside village of Capitola in Santa Cruz county about 100 kilometres south of San Francisco suffered possibly the worst damage as waves that were forecast to top 7.6 metres crashed into homes and restaurants at the mouth of Soquel Creek and knocked out a section of its historic wooden pier.

Surf shattered the windows at Zelda’s on the Beach, tossing furniture around inside the eatery. The Wharf House restaurant, at the end of the Capitola Wharf, was cut off from the mainland after a midspan of the wooden structure collapsed.

Wharf House owner, Willie Case said he had a “great degree of sadness” as he looked at the damage from a cliff above the village and lamented that his employees would be out of work until the pier is repaired.

He noted that in 1982, the former restaurant at that site fell into the sea. He anticipates more damage as new storms roll in.

Hurricane-strength gusts as high as 162 kilometres per hour toppled trees onto buildings and roads, knocked out power lines and blew down the roof on a gas station in South San Francisco.

National Weather Service meteorologist Warren Blier, said the wind speed recorded on a Marin County hilltop was among the highest he could recall in a 25-year career.

A large eucalyptus tree in Oakland crashed through the roof of Victoria James’ apartment as she was preparing for dinner on Wednesday. She and her children ran into the hallway, initially thinking it was an earthquake and braced for an aftershock.

As water began pouring into their home, the family fled with only clothes on their backs, some of the children without shoes.

She said from her car, “There’s big holes in the ceiling. In my bedroom, the living room and the kitchen for sure. Everything’s damaged.”

Officer Ross Lee said, a California Highway Patrol officer responding to a crash in San Jose was struck and injured by a tree on Highway 17. The officer was expected to survive.

The blustery winds and incessant rain were especially taxing for the homeless population in California, where 100,000 people live on the streets.

Glenn Scott, 59, who has arthritis in both knees and feet and needs a cane to walk, sought refuge on a bench outside the main San Francisco public library with a small group of other homeless people.

Scott said, “I just have to do whatever I’ve gotta do and go wherever I can to get peace of mind.”

California Governor, Gavin Newsom declared a state of emergency to allow for a quick response and to aid in clean-up from another powerful storm that hit just days earlier.

An employee at Seacliff State Beach, Paul Karz said in the coastal community of Aptos, about dozen people were stuck at their homes because flooding, downed trees and debris blocked the road out. Violent waters had tossed picnic tables against a cliff, wiped out much of the beach boardwalk, damaged its wooden wharf and left only a “skeleton” of its sea wall.

Sonoma county authorities issued an evacuation warning for a string of towns along the Russian River, where greater flooding was expected tomorrow.

Sections of Highway 101 in Northern California were closed due to downed trees, while rock fall had shuttered several sections of the coastal Highway 1, including in the scenic Big Sur area.

As much as 61 centimetres of snow fell on Mammoth Mountain over 24 hours and more was expected, delivering another bonus to Sierra Nevada ski areas.

The storm came days after new year’s downpour led to evacuations in Northern California, where at least four people died in flooding.

According to the National Oceanic and Atmospheric Administration, atmospheric rivers, named by researchers in the 1990s, occur globally but are especially significant on the United States (US) West Coast, where they create 30 per cent to 50 per cent of annual precipitation.

The storms won’t be enough to officially end the state’s ongoing drought, now entering its fourth year, but they have helped. Not including the latest deluge, recent storms moved parts of the state out of the “exceptional drought” category in the US Drought Monitor.

Most of the state, though, remains in the extreme or severe drought categories.