THE WASHINGTON POST – One of the things many of us love about baking is its bountiful nature – big batches meant to be shared. But multiple trays of cookies and large layer cakes are not always ideal for solo cooks or small households.

Two new books, Small Batch Bakes by Edd Kimber and Simple Small-Batch Baking by Mike Johnson, aim to help home bakers succeed at scaled-down sweets. It’s a topic that became increasingly relevant during the height of the pandemic and continues to be timely in light of inflation and increasing food prices. And there will always be demand for recipes that come together quickly without too many tempting extras hanging around.

I spoke to Kimber and Johnson to gather some of their top tips on baking for one (or a few).

Change your mind-set. Mustering the enthusiasm to cook for one can be challenging enough. But maybe baking falls by the wayside because it feels more like a splurge than a necessity. You’re worth it, though, Kimber said. He sees baking as an outlet for stress relief, and small batches are just the thing for “our daily moments, rather than the six special occasions we might have a year”. It is about pleasure without being saddled by the extravagance and expense of a large recipe. You’ll hardly find a better example of this than his “emergency” chocolate chip cookie, which we’ve dubbed the single-serving chocolate chip cookie.

Take advantage of equipment you already have. The great thing about small-batch baking is that a lot of scaled-down recipes work just as well with equipment you already have. Any size batch of muffins can be made using a 12-cup tin, and you can always bake only a few cookies on a regular half-sheet pan. And if you’re already a baker, chances are you have all the bowls and measuring spoons you need. Ramekins are another staple easily adapted to small-batch desserts, as is the nine-by-five-inch loaf pan. 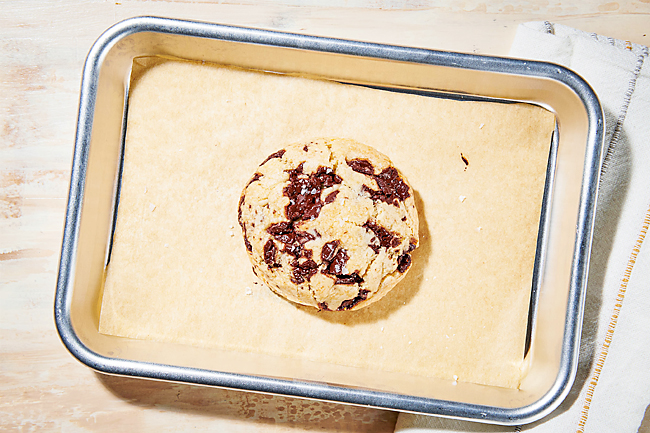 Buy a few handy extras. If you’re truly committed to the small-batch baking way of life, consider adding a few tools to your kitchen. Kimber swears by mini spatulas and whisks for combining smaller amounts of ingredients and says it can be helpful to have a small pot, such as a butter warmer or milk pan, on hand to make it less likely you’ll scorch milk, sauces or choux pastry by using something too big. He highly recommends a diminutive eighth-sheet pan, great for the aforementioned cookie but just as helpful for kitchen prep and cleanup.

Johnson said the most notable addition to your kitchen equipment might be small tart pans that are about four by three-quarter inches in diameter. He likes a six-inch cast-iron skillet for skillet cookies or cobblers, which would be perfect for a mini-frittata, too. Similarly, you’ll want six-inch cake tins if you want the wow factor of layer cakes in a less massive package.

Know what recipes scale down well. If you’re not starting with recipes intended for lower yields, know that most recipes can be successfully scaled down, so long as you’re careful and use common sense, Kimber said. Simple recipes with short ingredient lists are easiest to scale down. When Kimber was developing recipes for his book, cookies, especially egg-free shortbreads, proved very straightforward. Bars are relatively easy to adapt, and both Kimber and Johnson, whose previous book was devoted to brownies, offer recipes designed for a loaf pan.

“Eggs are the biggest hang-up when scaling down,” Johnson said. Scaling down recipes often means math that results in half an egg. How you handle it depends a bit on what you’re making. Using half an extra egg is unlikely to have a dramatic effect on a batch of bars or a half-dozen cookies. For something like one and a half eggs, you can try using one egg and one yolk and save the white for scrambled eggs or an egg white frittata (egg whites can be frozen, no problem). Another option: Skip the eggs and try a vegan alternative, such as a flax egg, egg replacer or applesauce. In his chocolate chip cookie recipe, the egg was going to be so minimal that Kimber just went with one-and-a-half teaspoons of milk instead.

Pay attention and adjust as needed. While baking always relies on attentiveness, it’s especially important if you’ve made scaling tweaks to a recipe. If you scale down a recipe that originally called for a stand mixer, you may find that a hand mixer is a better fit to more efficiently blend the reduced quantities of ingredients.

If you’re melting smaller amounts of butter or heating smaller amounts of dairy in the same size pot called for in the original recipe, expect to reduce the time to prevent burning. Bars baked in a smaller pan where the thickness of the batter hasn’t changed – such as moving brownies from a nine-by-13-inch to a nine-by-five-inch pan – may bake quicker. Items moved to a smaller pan resulting in a slightly thicker layer, such as cakes, may take longer. And scaled-down amounts of bread dough might not take as long to knead, Johnson said. The same wisdom applies to cake batter, Kimber said, when overmixing can yield tough, rubbery results.

When you need nothing other than a warm chocolate chip cookie, here’s a quick and easy recipe that makes just the right number: one.

It’s a hefty, indulgent treat, though, so I won’t fault you for sharing, but I also wouldn’t blame you for keeping it all to yourself. (I split it several ways with colleagues when testing!)

Regardless, this picture-perfect cookie from Great British Bake Off champion Edd Kimber will be on your plate in about half an hour.

The chilling time is optional, but if you prefer a thick, chewy cookie, we highly recommend it. Unchilled dough will bake up thinner and slightly crispy.

The amounts are so small here and the recipe is so forgiving that you don’t need to worry about weighing your ingredients.

It’s also the perfect small bake for your toaster oven. Feel free to change the add-ins to your choice of chocolate or nuts.

Position a rack in the middle of the oven and preheat to 350 degrees. Line a rimmed baking sheet (any size, but a quarter- or eighth-sheet is perfect) with parchment paper.

In a small bowl, combine the butter, light brown sugar and granulated sugar and stir with a spatula until well combined. Pour in the milk and mix until creamy. Add the flour, baking powder, baking soda and fine salt and mix until a soft but not sticky dough forms.

Add the chocolate and stir to combine. If needed, mix in a little extra flour, one teaspoon at a time, adding just enough to make the dough lose its stickiness but not become stiff.

Shape the dough into a ball and place on the prepared baking sheet. If you prefer a thick and chewy cookie, pop the pan into the freezer to chill for five to 10 minutes.

Bake for 16 to 20 minutes, or until golden around the edges and a little paler in the centre.

If you have chilled the dough, you may need the higher end of the time range. Sprinkle with the flaky salt, if using, and let cool on the pan. Serve warm or at room temperature.