PARIS (AFP) – Denmark became the second team to qualify for the 2022 World Cup finals when they beat Austria by a single goal early yesterday as England were frustrated by Hungary at Wembley.

Joakim Maehle scored in the 53rd minute to send the Danes to Qatar as they build on their surprise run at Euro 2020 this summer when they reached the semi-finals.

“You can only dream about things like this,” said Denmark midfielder Pierre-Emile Hojbjerg. “It’s crazy. This is huge for me, it’s huge for the team, for Danish football and for Denmark. With the age and quality we have, we will only keep growing.”

The Danes join Germany, who qualified on Monday, in the finals. Host nation Qatar qualify automatically.

England sputtered as a combative Hungarian side held them to a 1-1 draw. The match was marred by ugly scenes at Wembley as Hungarian supporters clashed with stewards and police. 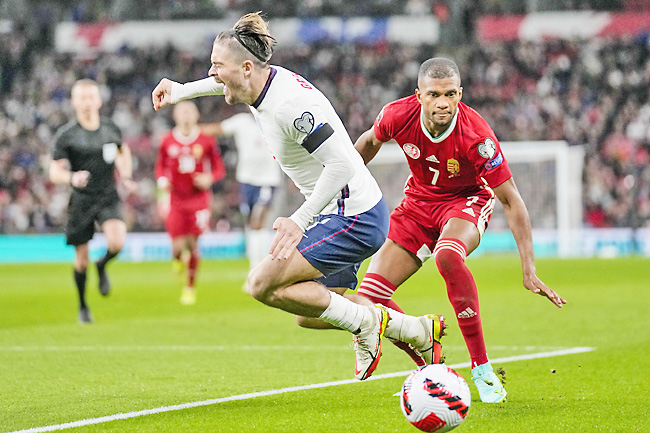 Gareth Southgate’s side fell behind to Roland Sallai’s disputed first-half penalty before John Stones stuck out a boot to score the equaliser in the 37th minute from Phil Foden’s cross.

Harry Kane failed to score in a qualifier for the first time in 16 games and was substituted as Hungary’s resolute defence kept a disjointed England side at bay.

“We did not play at the level we need to, simple as that,” said Southgate.

England defender Tyrone Mings called for harsher punishments for racism in football after it emerged the trouble at Wembley had flared after police had moved in to arrest a Hungarian supporter are what police called a “racially aggravated public order offence”.

Mings said, “Every time we speak on racial abuse the punishments that follow never seem in line with what has happened.

“I sincerely hope that if that is the case, the punishments fall in line with what happened this time.”

England will be sure of reaching next year’s finals if they take four points from their final qualifiers against Albania and San Marino in November.