THE WASHINTON POST – A good tortilla is supple, with a velvet-like density if it’s made of corn, or a burnished, silky sheen if it’s moulded out of a wheat flour-based dough.

It should curl into a cylinder without tearing or flaking, but be tender against the teeth.

Once filled, a proper tortilla becomes an edible vessel that complements the flavours it cradles within. In the symphony of a great taco, I think of the tortilla as the bass: a reference point for all of the other ingredients in each bite.

The taco, what we now think of as an emblem of Mexican culture, is an ideal example of what chef and culinary historian Maricel Presilla calls “the Latin penchant for building layers of flavour, instead of trying to fuse flavours into an indivisible whole”.

Whether you get them from a sidewalk stall or taco truck, a chain restaurant or fine-dining table, every taco has multiple components, each adding a note that, eaten together, builds into a pleasing, and sometimes surprising, crescendo of taste and texture. I was thinking about all of this as I worked on this recipe, for grilled zucchini and corn tacos with refried beans and quick-pickled chiles. You’re going to need a stack of good tortillas. They can be any kind, though I prefer corn for this taco. 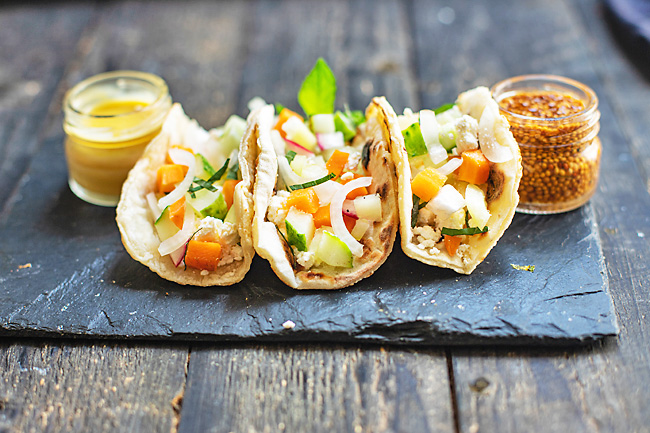 Start by making a small batch of quick-pickled chiles. I suggest Fresno chiles, those small teardrop-shaped red ones, but any fresh chile will work – just be sure to cut it into bite-size pieces or rounds.

While the chiles pickle, make a small batch of refried beans in a pan with some coconut oil, grated onion and garlic, and – this will save you time through the whole recipe – a dash of sazon.

The spice mix popular throughout Latin America – usually composed of some combination of salt, pepper, cumin, oregano and other aromatics – adds bold flavours to the beans as well as to a couple of ears of corn and halved zucchini.

Rub the vegetables with some oil and throw them on the grill until they’re tender and lightly charred. Let them cool, and then chop.

Now the fun part: Layering the flavours. Steam or griddle your tortillas until they’re soft and pliable. Add two or three tablespoons of refried beans, spreading them into a thick circle toward the centre of each tortilla. Add a large spoonful of chopped vegetables, a few pickled chiles, and, if you’d like, some crumbled or shredded cheese, a squeeze of lime and a few sprigs of cilantro.

If you’re serving this to a small crowd, let everyone build their own – layering on more of the flavours they prefer and less of the ones they don’t.

These summery tacos have layers of flavour: Quick-pickled chiles add heat and acidity; quickly made refried beans provide heft and creaminess; and grilled zucchini and corn deliver a hint of char and sweetness.

Sazon, a salted spice blend, makes seasoning the vegetables and beans a cinch. If you don’t have a grill, you can sear the vegetables in a cast-iron skillet on the stovetop or broil them until they’re lightly charred all over.

Make Ahead: The beans may be made up to two days in advance; gently rewarm on the stove or in the microwave until steaming, loosening with a splash of water, if necessary.

– Not into chiles? Use your favourite mild salsa instead.

– You could use black beans.

– Zucchini and corn are a nice combination for late summer; though the same seasoning and preparation would work just as well with bell peppers, asparagus, onions or mushrooms.

– Avoiding starches? Spread the beans over the bottom of a shallow bowl, top with leaves of lettuce or other greens, followed by the grilled vegetables and toppings.

For the pickles peppers

For the refried pintos

For the zucchini and corn

– One pound zucchini, halved lengthwise (or quartered, if thick)

– One pound of corn, husked

– Eight to 12 small tortillas, steamed or warmed in a skillet

In a small bowl, stir together the chiles, vinegar, salt and sugar, if using.

In a small skillet over medium heat, heat the oil until it shimmers. Add the onion and garlic and cook, stirring constantly, until it begins to brown, about two minutes. Stir in the sazon and the beans, and using a fork, mash the beans into a rough paste. Stir in the lime juice, remove from the heat and taste.

If using a gas grill, preheat it to medium, or 350 to 400 degrees. If grilling over charcoal, use a grill thermometer or use the hand method: If you can hold your hand an inch from the grill for about six seconds, the grill should be around 350 degrees.

In a large bowl, combine the scallions, zucchini, corn, olive oil and sazon. Use your hands to rub the oil and seasoning over every piece. Place the vegetables on the grill perpendicular to the grates and cook until lightly charred on all sides, about 10 minutes.

Remove from the grill and let sit until cool enough to handle but still warm, then roughly chop the scallions and zucchini, and scrape the corn off the cob. In a medium bowl, mix the chopped vegetables together.

To serve, spread a thin layer of refried beans onto each tortilla. Top with a mound of the chopped grilled vegetables, a few pieces of pickled chile, cheese, sour cream or yoghurt, a squeeze of lime and a few cilantro sprigs, or as desired. 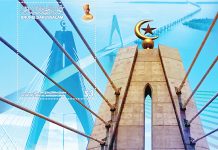 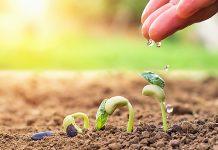 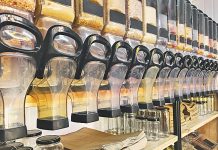