ISLAMABAD (ANN/DAWN) – Finance Minister Ishaq Dar is in Abu Dhabi to seek financial support, including through selling minority shares of state-owned companies listed on the stock market at negotiated prices.

On the first day of his visit, Dar met with the top management of multibillion-dollar public sector entities – like Abu Dhabi’s state holding company ADQ, the International Holding Company (IHC) and Etisalat – to discuss investment opportunities in Pakistan.

Dar’s visit, expected to last until today, is followed by Prime Minister Shehbaz Sharif’s visit to the United Arab Emirates (UAE) soon after he came to power in April and requested the Emirati leadership for USD2-3 billion in fresh loans.

The premier was assured that UAE’s leading state-owned firms and sovereign wealth funds could pick 10 to 15 per cent shareholding of publicly listed companies with a buyback option to the government of Pakistan and have their nominees on their board of directors as part of a professional business relationship instead of straight loans.

The UAE has been rolling over USD2 billion in loans to Pakistan since 2019, the latest being in March for another year. However, the authorities have been looking for greater support, given Pakistan’s limited foreign exchange reserves. Things have not progressed since Sharif’s visit on May 1, mainly because of Pakistan’s government’s inability to get a proposed law passed from the Parliament to allow the sale of stakes in state-owned companies through negotiated deals on a government-to-government (G2G) basis. 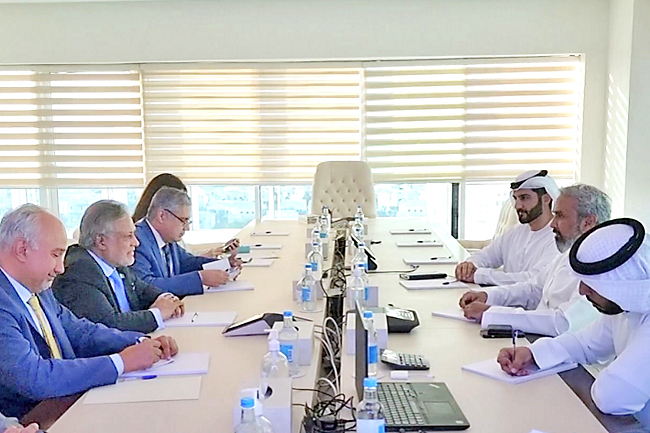 A similar offer from Qatar has also failed to materialise so far for the same reason, apart from slow movement on Qatar Gas’s proposed LNG terminal near Karachi.

An official statement said Dar met the CEOs of ADQ and IHC, Mohammed Al-Suwaidi and Syed Basar, in Abu Dhabi and discussed investment opportunities in Pakistan.

The two firms “expressed specific interest in investing in energy, agriculture, healthcare and other sectors”, the statement said.

Similarly, a delegation of Etisalat also met the finance minister and informed him about its ongoing operations in Pakistan and future business plans.

The company is holding back Pakistan’s USD800 million sale proceeds of the Pakistan Telecommunication Company Limited (PTCL) for 15 years. Pakistan is in the process of weighing the launch of next-generation telecom licences.

The government recently introduced a new piece of legislation – the Intergovernmental Commercial Transactions Act, 2022 – in the National Assembly to provide “for a mechanism to carry out a commercial transaction under an intergovernmental framework agreement to promote, attract and encourage foreign states to have economic and business relations with Pakistan”.

This was to ensure USD2-3billion inflows from the UAE through the sale of stakes in state-owned firms with debt creation with the option to buy back those shares to the timing of Pakistan’s choice because the existing privatisation law did not provide for negotiated G2G transactions and the Emirates was not willing to participate in bidding.

The UAE has already made similar investments in Egypt early this year and wanted to replicate that experience in Pakistan as well.

Pakistan was expecting investments from ADQ, IHC and others like the Mubadala Investment Company and Abu Dhabi National Oil Company in its oil and gas sector’s listed entities.

While transactions in Egypt were concluded, authorities in Islamabad have been unable to make any progress.