But Frederiksen plans to resign, because the Social Democratic leader wants to attempt to form a new government with broader support across the political divide – something she had suggested before the election.

The two seats in Greenland, an autonomous Danish territory, meant that the so-called red bloc of Frederiksen reached the required 90-seat majority and put her in a strong position after Tuesday’s tight election.

The Greenland results came in early yesterday and the red side’s win was based on the assumption that a vote count in Greenland would give the autonomous Danish territory’s two seats to the centre-left bloc.

Siumut and Inuit Ataqatigiit, two left-leaning groups, grabbed 37.6 per cent and 24.6 per cent of the votes, respectively. Four of the 179 seats in Denmark’s legislature, known as the Folketing, are reserved for Greenland and the Faeroe Islands, another autonomous Danish territory. 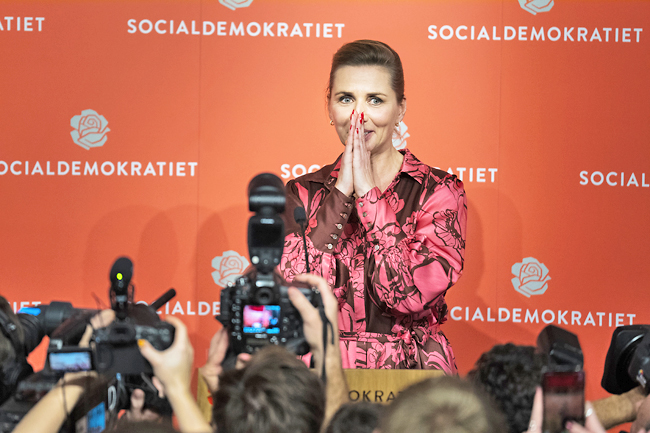 Frederiksen will formally hand in her resignation to Queen Margrethe after which talks to form a government – so-called queen rounds – are expected to begin with party leaders.

“It is also clear there is no longer a majority behind the government in its current form.

Therefore, tomorrow I will submit the government’s resignation to the queen,” Frederiksen said on Tuesday as she announced she would step down.

Margrethe’s role is largely ceremonial, but she performs certain official functions, including attending the opening of parliament, signing new laws, formally nominating a person to head the government-formation process and appointing the prime minister. Sometimes several “queen rounds” are needed before a new government can be formed.

Associate Professor of Political Science at Aarhus University in western Denmark Troels Bøggild said that Frederiksen “has two options to form a government”.

“Either go with the Moderates (at the centre) and the Liberals and if that fails, she can crawl back to the red bloc and form a government there. By resigning, she shows that her election promises to build a broad centre government is serious,” he told The Associated Press. “If she didn’t resign and formed a government in the red bloc, she would face criticism. To avoid that, she has resigned.”

Frederiksen was forced to call the vote earlier this month amid the fallout from her government’s contentious decision to cull millions of minks as a pandemic response measure. The cull and chilling images of mass graves of minks have haunted Frederiksen since 2020 and eventually led to cracks in the centre-left bloc.

The Social Democrats remained Denmark’s top party with 27.54 per cent of votes, but it remained unclear long into the night whether the center-left parties together would reach a majority. The decisive seat flipped at the very end of the vote count. Before that, former prime minister Lars Løkke Rasmussen appeared set to become kingmaker. His newly formed centrist party won 9.27 per cent of the vote for 16 seats, according to the preliminary results. Final results were expected later.

Løkke Rasmussen said he too wanted Frederiksen to try to form a government, but he wouldn’t provide support for her to remain “as prime minister”.

Løkke Rasmussen, a two-time government leader who lost the 2019 election to Frederiksen and abandoned the centre-right Liberal party following an internal power struggle, wouldn’t say whom he would back as the next prime minister or whether he saw that role for himself.