Cycling is more than just leading a healthy lifestyle. For this group of men, it was an opportunity to help raise funds and awareness on how the sport can improve the quality of life.

The journey from April 17 to 18 took 35 hours to complete. The cyclists were accompanied by support that provided aid and boosted morale.

Scheck said one of the reasons behind the journey was to raise funds for the World Bicycle Relief, an international non-profit organisation that provides bicycles for schoolchildren who have to walk long distances to and from school. The project raised BND4,356, challenging their previous attempt of 323 kilometres in October 2020.

Scheck said the weather was a hurdle they had to adapt throughout the journey.

They also had to ensure sufficient intake of nutrients and water.

The biggest hurdle of all was the mental focus it required to complete the gruelling task. “Even if your body can keep going, your mind struggles,” he said. 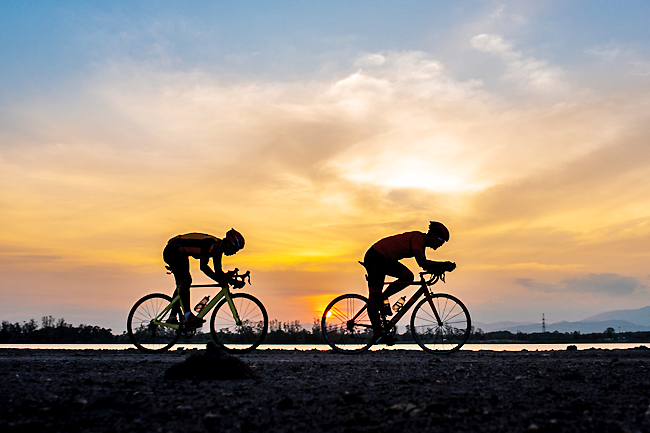 Before beginning the journey, the group made some prepared food and other support. The latter had the added benefit of enlivening the atmosphere to lessen the mental test ahead.

During the journey, they received endless support from the cycling community. Scheck said he was touched by the many that showed their support during sungkai or sahur, which helped motivate the riders during the quiet hours.

The journey did take a toll, however with fatigue setting in some time after.

Scheck recalled that at around 10pm, Jangra, one of the riders, went quiet. “I tried to encourage him by reminding that we would be having our next warm meal soon,” he said, adding that small goals kept them going until their next stop at 11.30pm.

However, the biggest challenge was the pain Scheck began to feel around the 700 kilometre mark.

He realised the intense pain on his feet from prolonged pushing the pedals. While this took quite a toll on him, physically and mentally, he pushed on.

Nonetheless they accomplished what they set out to accomplish but to Scheck and Jangra, it was largely due to the support they received.

Despite the lack of a medal or other tangible rewards, the mere completion of the journey provided the riders with tremendous sense of pride.

“The best rides are the ones where you don’t know if you can finish – yet you still do,” said Scheck.

Jangra shared a similar sentiment by saying, “Completing the journey made me happy. Seeing so many people come together to support us for this fundraiser is absolutely remarkable!”