CNA/ The New York Times – Sometimes, seemingly small changes in a health measurement can make a very large difference to people’s wellbeing. Such is the case with the effect on blood pressure of the essential nutrient sodium, the problematic half of the popular flavouring agent sodium chloride, commonly known as salt.

The amount of salt that is safe for people to consume has been embroiled in controversy for a century, and the debate is unlikely to be resolved anytime soon. Scores of studies of varying quality linking sodium intake and health have swung the pendulum back and forth, stymieing regulations to limit sodium in most commercially prepared food.

Some people are especially sensitive to sodium’s ability to raise blood pressure, but given how common high blood pressure already is, and how difficult it is to avoid consuming too much salt, many experts maintain that the safest approach is an overall reduction in sodium levels in prepared and processed food.

More than 100 million Americans have high blood pressure, a disorder that increases their risk of heart attacks and strokes, and which, for many people, is made worse by consuming too much sodium.

Just a four-millimetre (mm) rise in blood pressure – say, from 130mm to 134mm of mercury – can jeopardise the health of some people, and the blood pressure of those who are especially salt-sensitive can rise by 10 or more millimetres of mercury on a typical high-salt diet. 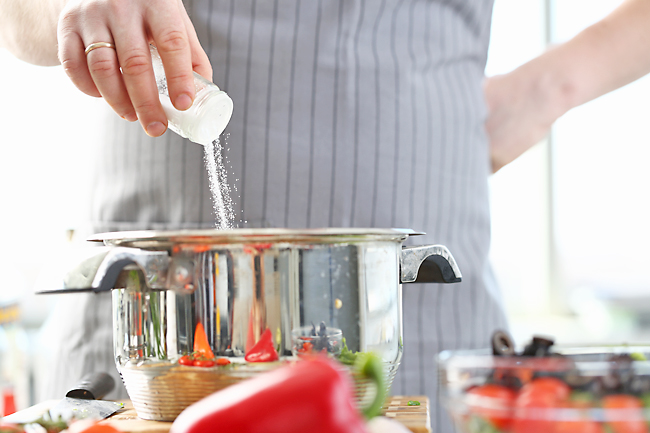 In 2010, a Stanford University team estimated that cutting about 350 milligrammes (mg) of sodium a day (less than a sixth of a teaspoon) would lower systolic blood pressure by only 1.25mm of mercury yet avert about a million strokes and heart attacks.

A new study conducted in 600 villages in rural China of 20,995 people known to face a high risk of stroke, demonstrated that substituting reduced-sodium salt for regular table salt significantly decreased the rate of cardiovascular events and associated deaths during an average follow-up of less than five years.

The protection occurred in households that used modified table salt in which potassium chloride replaced 30 per cent of sodium chloride, even though there was no change in their use of other rich sources of sodium like soy sauce and MSG. Fifteen years earlier, a similar study among elderly veterans in Taiwan who used a potassium-enriched salt reduced cardiovascular mortality by 41 per cent in less than three years.

Companies have found that gradually lowering the sodium content of their products and making no fanfare about it, like not claiming they’re “low sodium”, actually fosters consumer acceptance.

Most people don’t even notice the change. But you may not have to wait for companies to do the work. For example, you can reduce the salt in many canned food, like beans, by rinsing them in a colander. Or try my trick of diluting the salt in canned soups by first filling the bowl or pot with fresh spinach and other quick-cooking or precooked veggies before adding the soup and heating it in the microwave or saucepan.

If you hope to enhance your health by cutting down on sodium, one trick is to avoid going cold turkey. I and many others have found that it’s relatively easy to reduce one’s preference for high salt by gradually using and consuming less of it. As your taste buds adjust, high-salt food you once enjoyed will probably taste unpleasantly salty and thus easy to resist.

In cooking, rather than adding salt when preparing a recipe, try salting the finished product, which is likely to please your palate with considerably less salt. Seasoning food with citrus juices, hot-pepper flakes or other pungent herbs and spices can go a long way to make up for reduced salt. You might also eat less bread; as a category, bread and other bakery products contribute more to Americans’ sodium intake than any other food.

But an even greater contribution most likely comes from restaurant-prepared food, which Dr Jacobson calls a salt-laden minefield. I’ve noticed that the day after I dine in a restaurant, I weigh about two pounds more, not because I ate two extra pounds of food but because the excess salt in what I did eat retains that much water in my body.

In lieu of government regulations to limit sodium, consumers might consider writing to producers of their favourite commercial products and asking that they consider lowering the amount of salt used.

Currently, the amount of sodium in the typical American diet is more than one-third higher than the daily limit of 2,300mg recommended by the American Heart Association (AHA) for otherwise healthy people, and it is more than double the amount – 1,500mg – the association considers ideal for people with elevated blood pressure. The actual physiological requirement for sodium is a mere 220mg a day, so these recommended amounts provide a huge safety margin.

The human species evolved on a very low-sodium diet of 200mg to 600mg a day. In fact, our bodies are designed to conserve sodium and get rid of potassium, which explains why a high-sodium diet can be a problem. The body holds on to excess sodium, increasing the chances of ill effects.

Before refrigeration, salt was prized for its ability to preserve food, and was so highly valued it was used for currency. Now, however, salt has become the bête noir of physicians who treat heart disease, hypertension and kidney disease, among other deadly disorders.

Though doctors have long argued that Americans should consume less salt, the wheels of regulatory action turn at a glacial pace, and modifying people’s taste buds is equally challenging. As far back as 1979, an advisory group commissioned by the Food and Drug Administration (FDA) recommended that salt’s status as “generally recognised as safe” should be reconsidered. But the agency only asked the food industry to voluntarily reduce the amount of salt used in commercial food.

Now, at least, the amount of sodium in packaged food has been added to nutrition labels, giving consumers a leg up if they take the time to compare brands before heading to the checkout counter.

The ongoing problem with salt is thoroughly discussed in an excellent book published last year, Salt Wars, The Battle Over the Biggest Killer in the American Diet, by former executive director Michael F Jacobson of the Centre for Science in the Public Interest, a consumer advocacy group based in Washington DC.

Without waiting for a regulatory hammer, Dr Jacobson told me, “some companies have made a real effort to lower the amount of sodium in their products. There are lots of tricks companies can use”.

For example, in its canned tomato soup, Campbell’s replaced a quarter of regular salt with potassium chloride, lowering sodium from 760mg to 480mg per cup, with no adverse effect on consumer acceptance. Nabisco cut the sodium in Wheat Thins, my favourite snack cracker, from 370mg to 180mg an ounce, and General Mills reduced the sodium in Wheaties, the cereal my sons grew up on, from 370mg to 185mg an ounce.

For those fond of crunchy chips, check out the Kale and Spinach Tortilla Chips from the CVS store brand Abound, which have only 75mg of sodium an ounce (about 11 chips).