KONGSBERG, NORWAY (AP) – The suspect in a bow-and-arrow attack that killed five people and wounded three in a quiet Norwegian town this week is facing a custody hearing yesterday. He won’t appear in court because he has confessed to the killings and has agreed to being held in custody.

Espen Andersen Braathen, a 37-year-old Danish citizen was arrested on Wednesday night, 30 minutes after he began his deadly rampage targetting random people. Police have described the attack as an act of terror.

On a central square in Kongsberg, a town of 26,000 people surrounded by mountains and woods some 66 kilometres southwest of Oslo, people were laying flowers and lighting candles yesterday.

“This a small community so almost everybody knows each other, so it s a very strange and very sad experience for us,” said teacher Ingeborg Spangelo, who brought her students to the impromptu memorial. “Its almost surreal or unreal.”

Andersen Braathen was handled over to medical authorities, Norwegian news media reported yesterday, saying he will be observed and assessed by two experts who will try to clarify whether he was sane at the time of the attack. If they reached the conclusion that he was not sane, he cannot be punished for the acts, but can be sentenced to compulsory mental health care. 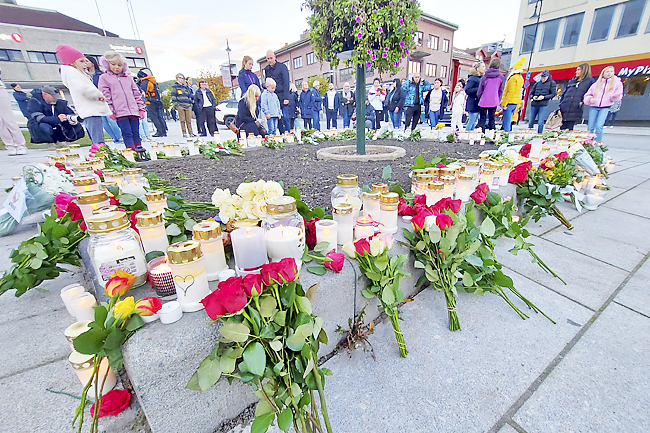 Regional prosecutor Ann Iren Svane Mathiassen told Norwegian broadcaster NRK that the decision for his move was “an assessment of his health situation. She didn’t elaborate.

Andersen Braathen used a bow and arrow and possibly other weapons to randomly target people at a supermarket and other locations in Kongsberg, where he lived.

Four women and a man between the ages of 50 and 70 were killed, and three other people were wounded, police said.

Police said they believe he acted alone. Norway’s domestic security service PST said the attack “appears to be an act of terror,” but didn’t elaborate. It added that Andersen Braathen was known to the PST, but, again, declined to elaborate.

The suspect has been described by police as a convert and said there “earlier had been worries of the man having been radicalised,” but authorities did not elaborate or say why he was previously flagged or what authorities did in response.

According to Norwegian media, Andersen Braathen has a conviction for burglary and drug possession, and last year a court granted a restraining order for him to stay away from his parents for six months after threatening to kill one of them.