THE WASHINGTON POST – When United States (US) Vice President Harris visited a suburban woman-owned yarn shop last month, she mentioned a little-known fact about herself that left the fibre arts community a bit giddy. The new vice president is a crocheter.

“I was raised by a mother who said ‘I am not going to let you sit in front of that television doing nothing.’ And so I have crocheted more afghans than I can tell you,” Harris said while visiting the store, Fibre Space in Alexandria, Vancouver. “And our daughter is a knitter.”

At the shop, Harris learned about a special hand-dyed yarn named in her honour (Observatory Circle, site of the vice-presidential residence) from a woman-owned, Baltimore-based business Neighborhood Fiber Co. Five days later, on International Women’s Day, a crocheted mural of Harris’ likeness and the words “I’m Speaking” was installed at Washington’s Wharf neighbourhood. And with all the Googling of “Kamala Harris and crochet”, craftyiscool.com saw a spike of online sales for a pattern to crochet a Harris doll in the Japanese style of amigurumi. (Amigurumi means knitted or crocheted toy.)

Crocheting’s cool factor was on the upswing already as hipsters helped the hobby shed its image of being the stuff of old ladies. During the pandemic, more people have picked up crafts such as quilting and knitting for comfort and to pass the time. Knitters are a much larger group, but the global crochet community has been growing as artsy crocheters keep posting their rugs, bralettes, sanitiser-bottle covers and cardis on social media.

And Harris’ association with crocheting is huge. “Knowing that the vice president is a crocheter gives me street cred,” said Hoffman, who sells patterns for Amanda Gorman and Bernie Sanders dolls, among others. “Now I can say that I am doing what Kamala Harris does.” 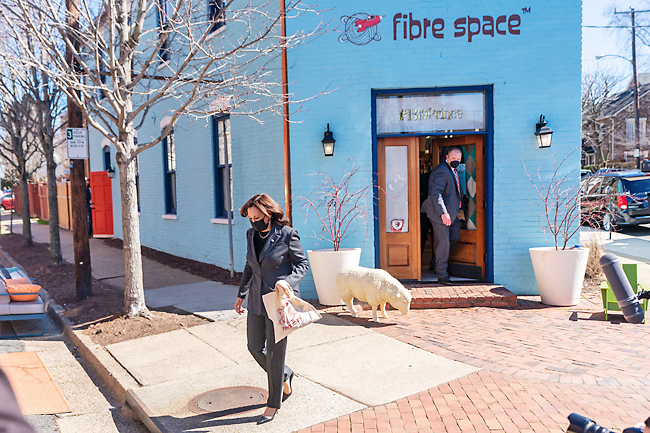 Harris made the visit to Fibre Space, a boutique yarn shop in Old Town Alexandria, to check in with owner Danielle Romanetti on how Romanetti was managing in the pandemic and to discuss the COVID-19 stimulus package.

“I didn’t know that she crocheted,” said Romanetti, who was contacted by the vice president’s office about five days before the visit. “When she showed up and said that, that was a surprise to us and most of the knitting and crochet community was excited to find that out. News spread around very quickly.”

While Harris was in the shop, Romanetti pointed out the wine-coloured Observatory Circle yarn that had been named in her honour. Harris bought a skein, which Romanetti understood would be given to Harris’ stepdaughter Ella Emhoff, a fashion student in New York who designs knitwear.

Neighbourhood Fiber’s owner Karida Collins created the yarn to mark the Biden/Harris win. “I wanted to commemorate how significant it is that our vice president is a woman and she is Black and she is Asian and she is the child of immigrants,” Collins said.

The deep burgundy colour was inspired by an illustration of Harris, depicted in a navy blue pantsuit in front of an American flag, by Collins’ friend Ashley Johnson. “In my mind, I was creating a colour that would look good on Vice President Harris in that outfit and be evocative of the flag without being too literal,” Collins said.

Hoffmann said she was also moved to create something to honour Harris the night the Biden/Harris ticket won the election. “I was watching her speech where she was wearing the white pantsuit. It was such a moment,” said Hoffman, who wrote books on amigurumi and sells patterns and supplies for making the dolls and toys.

“That night I started crocheting the Kamala doll,” Hoffman said. “I have developed this line of yarn for different skin tones. I had the perfect colour.” She soon started selling patterns to crochet the doll, which has two shoe options: heels or sneakers.

The Harris mural at the Wharf, a community of restaurants, shops, offices and parks on the Washington Channel of the Potomac River, consists of 150 squares crocheted by volunteers.

It was organised by “yarn bomber” and street artist London Kaye through Love Across the USA, an organisation that creates crochet art installations honouring notable women. Kaye was inspired while watching the Inauguration Day events, and she posted a call-out on Instagram (@madebylondon) for volunteers to crochet 24-by-24 inch squares that would be combined into a 40-foot-wide mural.

“It only took one post. I got enough volunteers to make four billboards,” she said. Kaye added that she didn’t know Harris was a crocheter until after she started planning the mural, when she stumbled upon a 2018 article in Vogue where the vice president’s sister, Maya Harris, referred to her as “the mad crocheter”.

Through a partnership with the Wharf and the Southwest Business Improvement District, Kaye arranged to install the completed mural on the outside of Officina restaurant on International Women’s Day, March 8. It will be up through Memorial Day weekend, she said. Second gentleman Doug Emhoff has already visited the mural, and Kaye is hoping Harris will also come take a look.

No response from the White House about whether the vice president has brought any of her crocheted afghans to her official residence at Number One Observatory Circle. (Or whether she has any time to crochet these days.)

She and Emhoff moved there last week after staying at Blair House while renovations were being completed on the 1893 Victorian house.