BEIRUT (AP) – Tarek Younes was once solidly middle class and felt he helped contribute to society as an inspector in the Lebanese government’s consumer protection agency. But the country’s economic free-fall has eroded his income and civic pride.

In his desperation, Younes has joined tens of thousands of public sector employees across the country in an open-ended strike that has already lasted for six weeks.

The protest of the civil servants who form the backbone of government signals a further erosion of Lebanon’s public institutions, already struggling to afford their most basic operating costs.

The strike gives a bleak preview of how Lebanon could sink even deeper, should officials continue to delay decisive action on key financial and administrative reforms sought by the International Monetary Fund (IMF) to make Lebanon’s comatose economy viable again.

Meanwhile, the protest further disrupted life in Lebanon, with even the most basic government services on hold. Court cases have been delayed. Identity cards, birth certificates and school transcripts are not being issued. Air traffic controllers announced that they would stop working nights in August. 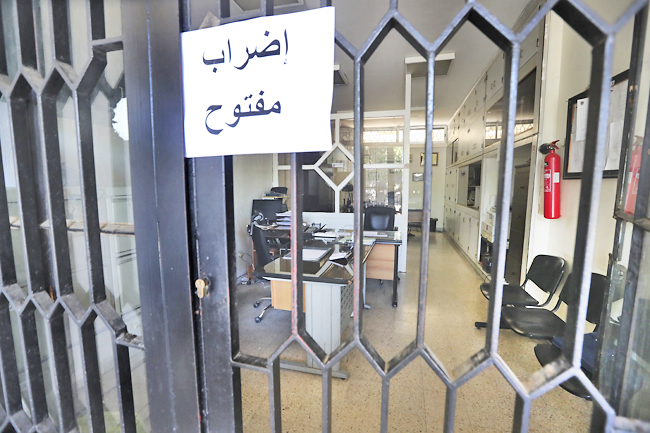 Over the past year, public transportation drivers and public school teachers held unsuccessful sporadic strikes and protests, which they hoped would be a wake-up call for government.

“I don’t know how we’re thinking about economic recovery, if you have that many people who were once middle class now living in poverty,” Younes told The Associated Press (AP).

“We are extending our hand and making compromises, but the government needs to do so as well and give us some of our rights.”

Many point to decades of corruption and nefarious financial management as a cause for Lebanon’s economic downward spiral, now in its third year.

They said a handful of members of Lebanon’s ruling elite caused the world’s worst economic crisis since the mid-19th Century, with three quarters of the population now considered poor.

The government has not increased wages for public sector workers since the onset of the country’s fiscal crunch in late 2019, during which the Lebanese pound lost over 90 per cent of its value against the dollar. On top of that, food, gasoline and medicine prices are up sharply due to high inflation.

Younes, who heads the Association of Public Administration Employees, said public sector wages once secured a middle class lifestyle at around USD1,300 per month. But that value has rapidly plummetted to the equivalent of under USD70. In a country of about six million people, some 350,000 Lebanese work in the public sector and their salaries account for a huge chunk of the national budget.

Younes said public workers are demanding a small wage increase, better health care and a flexible transportation stipend to keep up with rising gasoline prices. They would still work with a major pay cut but he said it would “at least help us get the bare minimum of a dignified life”.

With the onset of the financial crisis, Younes was scrambling as a government inspector to crack down on illegal price hikes and the hoarding of gasoline, wheat and medicine. He and dozens of other inspectors at the consumer protection services division of Lebanon’s Economy Ministry were tasked with monitoring thousands of Lebanese businesses.

Lebanon’s bickering ruling political parties have stalled in putting together an economic recovery plan and reaching a deal with the IMF for a bailout programme to restructure its crippled banks and reform its pulverised economy.

The country’s caretaker government under Prime Minister Najib Mikati said it can’t afford the workers’ demands but offered temporary cash bonuses and a slightly improved transportation stipend. Some employees have returned to work, but Younes said the majority still have their doors closed.

“What will (the bonuses) do? Will it help you get to work, pay your electricity bill, or your phone bill?” Younes said. “You can do one of these, but then you can’t feed your children, take them to school, or get them health care.”

Lebanon’s public sector was weak even before the crisis began in late 2019, said Sami Zoughaib, an economist at Beirut-based think tank The Policy Initiative. He described it as bloated, inefficient and marred by political patronage and corruption.

“The elite used public employment as a tool in their clientelistic practices to garner political support,” he said. “A bunch of them are ghost employees who are there only to get their checks but never show up to work.”

Trimming the public sector payroll might help make the country’s budget sheet less sore on the eyes, but may cause backlash, impact political loyalty and worsen Lebanon’s already alarming poverty rate. The cash-strapped country has no viable social protection programmes to soften the blow.

“If you fire 20 or 30 per cent of the workers, how do you make sure they survive? What kind of social protection measures are you using?” Zoughaib said.

Lebanon has stalled on adopting key structural reforms required to reach an agreement with the IMF on a wholesale economic recovery programme, with the government instead resorting to stop-gap measures to quell social tensions.

Zoughaib isn’t optimistic this will change.

“They will continue to kick the can down the road without harming themselves politically, with some patchwork,” he said.

“This is harmful for both the public sector and largely for the Lebanese public, which needs public institutions.”

Meanwhile, Younes anxiously shuffles papers at his desk at the consumer protection unit as he takes a phone call. It’s another scuffle at a bread line and it appears that a bakery in Beirut has been illegally hoarding subsidised wheat imports. He called two inspectors to investigate the situation.

Younes insisted his sporadic visits to the office, located just a few floors under the economy minister’s, do not signal an end to the strike. He said he still gets involved in some emergencies linked to food security, especially bread.

“Because we see how much people are suffering, and because we’re part of the people, we no doubt choose to remain available on this matter even at the bare minimum,” he said.

Younes then prepares for another call with some ministers who have been negotiating with the striking workers. He said their sympathy alone is no longer enough.

“Just like we’re committed to the public administration to continue its work, we hope the rulers do so too,” he said. “If there is no public sector, there is no state, no entity.”