ANN/THE JAKARTA POST – As an archipelagic country, Indonesia has a variety of culinary specialties from all its many islands. However, Indonesian cuisine has one side dish that is a staple on almost all dining tables across the country – kerupuk. Generally made from tapioca flour, there are a plethora of varieties – but here are the top 20.

Kerupuk bawang has a savoury and crunchy taste that comes from garlic, hence kerupuk bawang (garlic cracker). In addition to garlic, kerupuk bawang needs other ingredients such as flour, salt, pepper powder, sugar, baking soda and water. This cracker is available in almost all parts of Indonesia.

However, the kerupuk bawang in Indragiri Hulu Riau is different because it uses coconut milk as an additional ingredient. Due to its uniqueness, kerupuk bawang has become a must-buy snack souvenir from the area.

This cracker originates from Sidoarjo, East Java. The fishermen of Sidoarjo used to be perplexed by the abundance of fish and shrimp they caught, so they invented kerupuk udang (prawn cracker).

The catches were used as the primary material for making the crackers. Tapioca flour and mashed shrimp are the essential ingredients in kerupuk udang. Aside from the strong shrimp flavour, kerupuk udang has a high nutritional content, including phosphorus, calcium and iron.

This cracker has a slightly bitter taste and does not use tapioca flour or fish as the primary ingredients. The people of Selayar, South Sulawesi, make this cracker from melinjo seeds.

As one of the traditional dishes of the province, these crackers are made traditionally by grounding the melinjo seeds one by one to produce their natural flavour.

Kerupuk melinjo, frequently known as emping, is available in a variety of flavours, including salty, spicy and sweet, depending on the amount of salt or caramelised sugar added. 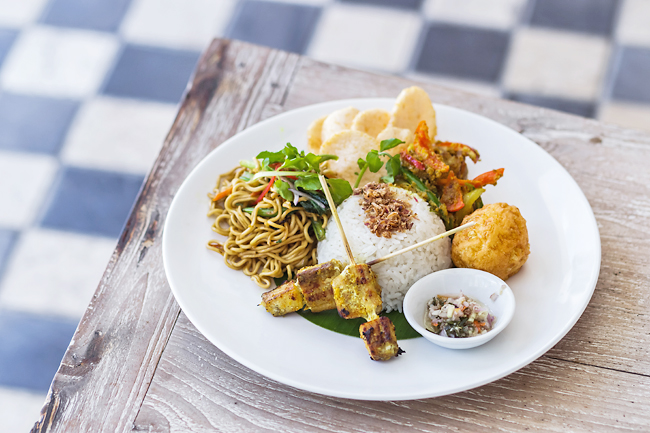 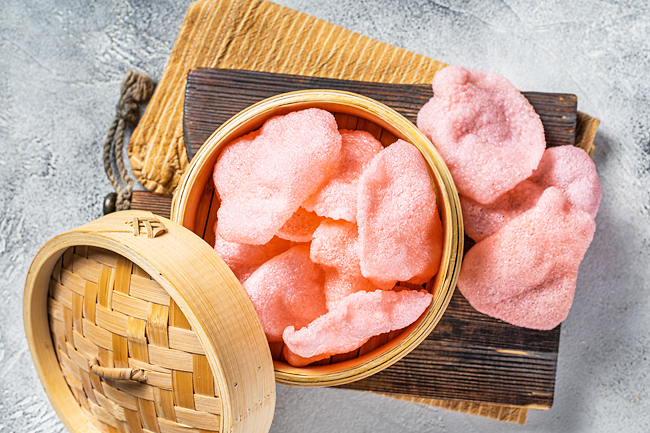 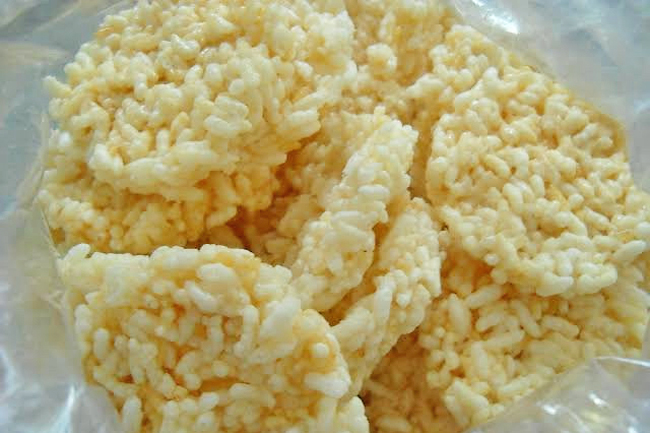 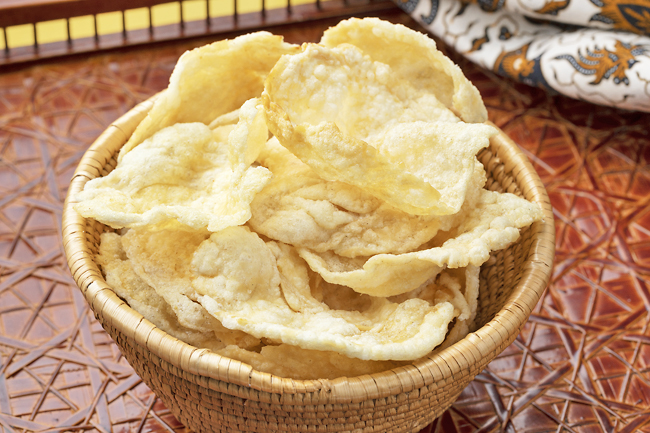 Kerupuk blek dates back to the 19th Century when cassava production was abundant in Java. Only someone called a tukang ngabalo (concoctor) can make kerupuk blek dough.

After the tukang ngabalo finishes the dough, it is placed in a container resembling a large pipe and pressed with a stone by someone known as juru batu (stoneman).

After the dough-making process is completed, the dough will be moved to an ebeg, which is similar to a frame booth. The ebeg is about a metre long and half a metre wide. The dough is dried before being fried in high-temperature coconut oil. The finished product is typically stored in a blek (zinc food container), which is how it earned its name.

Kerupuk rambak (skin cracker) is made by soaking cow hide in lime water for 48 hours. In addition to the soaking, the hairs on the skin are removed with a knife. The clean skin is sun-dried, cut into size-appropriate pieces and boiled with garlic, salt and sugar.

Once cooked, the skin is drained and dried before being fried again. Tulungangung, East Java, is the home of kerupuk rambak. Nonetheless, it is frequently found along with Yogyakarta’s traditional dish krecek.

Kerupuk gendar is commonly found in Blora, Solo, Madiun and Salatiga on the island of Java. Indonesians often consume kerupuk gendar as a snack or a rice complement due to the crunchy and savoury taste that comes from the cooked rice.

Kerupuk gendar is not only made from cooked rice. Tapioca flour is also essential for the dough-making process since tapioca flour has a significant role in making the kerupuk crunchy.

Through the frying process, kerupuk gendar comes in a variety of flavours, including onion and spicy.

Kerupuk kemplang is made using the dikemplang (hitting) method so the dough is flattened. This cracker originates from Palembang, South Sumatra. Kerupuk kemplang was traditionally made from belida fish.

However, as the population of this type of fish has declined, it is being replaced by gabus fish. Kerupuk kemplang is processed by baking it over coals until it expands. Due to its baking process, kerupuk kemplang has a distinct aroma compared with other crackers.

Originating on the island of Java, rengginang is a kind of thick circular cracker made from glutinous rice. Unlike other types of crackers that are made from a mashed mixture of ingredients such as tapioca flour or grounded melinjo seeds, rengginang is not ground, so the shape of the glutinous rice grains remains visible.

Kerupuk melarat comes from Cirebon, West Java, which basically uses sand as a substitute for oil in the cooking process. Back then, not everyone in society could afford cooking oil, so they roasted the crackers in sand.

That is why the people of Cirebon called it kerupuk melarat (poor man’s cracker). Besides being roasted using sand, another characteristic of kerupuk melarat is its different colours such as red, white and green.

Kerupuk amplang is a traditional East Kalimantan cracker, developed and produced for generations since the 1970s. This is a fish-based cracker mixed with tapioca flour and spices.

Kerupuk amplang commonly uses mackerel fish. A good amplang usually does not take long to fry and has a crunchy bite. If the amplang is of poor quality, the crackers will never expand even if they are fried for a long time.

In general, rempeyek is fried flour mixed with water to form a thick dough, seasoned (particularly with salt and garlic), and garnished with special toppings.

Some rempeyek also use anchovies, dried shrimp or crab, or even termites as the topping. Nowadays, spinach leaves can also be used in making rempeyek.

The iconic cracker of Wonosobo, Central Java, is said to be opak singkong. It has a savoury taste and crunchy texture that comes from singkong (cassava) and chive leaves.

Opak singkong used to be produced only by the people of Kalibeber, Mojotengah. Now, it is produced in most of Wonosobo. The locals often eat opak singkong as a side dish for their breakfast starter.

Karupuak jariang or kerupuk jengkol is one of the best-known traditional Minangkabau snacks.

It is usually round-shaped and brown, and is made from jengkol beans. Kerupuk jengkol is typically enjoyed with warm soup or rice, as a side dish with sambal (chili sauce), or sprinkled with Indonesian jackfruit curry or cubadak.

Due to the jengkol beans’ djenkolic acid, it may leave you with a malodorous breath after eating it.

Kerupuk kluntung is associated with Banyuwangi, East Java. This type of cracker is made with a combination of rice flour and starch. It has a similar flavour profile to other crackers.

What distinguishes kerupuk kluntung from the others is its shape, which resembles a shell. The word kluntung means to roll and the krupuk dough must be rolled to make kerupuk kluntung. The cracker is usually served during Idul Fitri and wedding parties.

Kerupuk mie is mainly produced in the Central Java area on a home industry scale. It is distinguished by its broad shape and named after its shape, which resembles a round disc of noodles.

Although kerupuk mie originates from Central Java, it has also recently become the iconic cracker of Cimaung, Bandung, West Java. People in Cimaung refer to kerupuk mie as kerupuk ojay and most buy it while they are on their way to Pengalengan. Just like kerupuk melarat, kerupuk ojay also uses sand for its roasting process.

The locals of Medan in North Sumatra usually eat kerupuk orong-orong as a side dish, and it is usually enjoyed with satay, meatballs and noodle soup.

The snack is made from rebon shrimp and flour. Since this cracker uses rebon shrimp, people typically can detect a hint of shrimp aroma in kerupuk orong-orong, making its taste even more savoury than other crackers.

Kerupuk ikan (fish cracker) comes from the Cilacap area, Central Java. Kerupuk ikan is similar to other types of crackers in profile – savoury, crunchy and with a slightly thick texture.

What distinguishes it is its powerful mackerel aroma. Besides the fish as its main ingredient, good kerupuk ikan also requires eggs, sugar, mushroom broth, salt, baking soda and tapioca flour.

Kerupuk pangsit (wonton cracker) has a savoury and crunchy texture with a floury taste.

This type of cracker is thin and uses eggs, flour and cornstarch as ingredients.

It is best to use warm water to make kerupuk pangsit dough so the texture will be perfect.

Kerupuk pangsit is often enjoyed as a snack at home and it is best to eat kerupuk pangsit along with other menu items, such as meatballs or fried noodles.

Peletekan is another cracker that uses belida fish as an ingredient. At first, the belida fish will be cleaned and separated from the meat and the bones.

Next, the fish meat will be cut into small pieces so the meat grinding process is easier. For the spices, peletekan requires garlic as the main seasoning to get a savoury and crunchy taste.

After the meat and spices are finished, the two ingredients are added to flour slowly while stirring until the dough is done.

Once kneaded, the dough is moulded into a round shape and goes through a steaming and drying process before it can finally be fried and enjoyed.

Cililin in Bandung, West Java, is where this cracker originates from. The name gurilem stands for gurih (tasty) and pelem (delicious). Before the name gurilem, the locals called this cracker kurupuk jendil because of the thick shape, in Sundanese, jendil means thick.

With the various flavours such as onion and spicy peanut, the cracker is tastier (gurih) and more delicious (pelem), which is why the people of Cililin changed the name to kerupuk gurilem.

This type of kerupuk is popular among visitors to Cililin who buy it as a souvenir.