Q: The marble (I think) top of my buffet has a serious crack in it. I have called two or three countertop/stone companies to repair it, but no luck. I would be happy with a simple “glue job”. How can I fix this?

A: It isn’t clear from the picture you sent whether the corner has broken off or whether the stone is just cracked. A crack is easier to deal with, but either way, you should be able to get reasonably good results by using an acrylic-epoxy adhesive tinted to approximately match the stone. Get a knife-grade adhesive, which means it has a putty-like consistency. That’s a lot easier to control than a free-flowing liquid.

As with several other kinds of stone fillers, including pure epoxies, epoxy-acrylics are two-part formulas: the basic product plus an activator. But unlike some products that are mixed in equal amounts, with epoxy-acrylics, you need only a tiny bit of activator, no more than three per cent. Mixing in the activator starts the clock ticking; after that, you have only a short window until the material starts to harden. The more product you mix at once, the more heat the chemical reaction gives off – and the more heat, the faster it hardens. Especially if you are trying to reattach a broken-off chunk, the trick is to mix just enough adhesive to hold the two pieces together. If the squeeze-out when you press them together doesn’t completely fill the gap, no worries. You can mix more later to fill in any gaps.

Geronimo said one reason he recommends epoxy-acrylic is its price, which is less than one-third the price for a pure epoxy. That product stands up better outdoors but isn’t needed for a project like yours, he said. 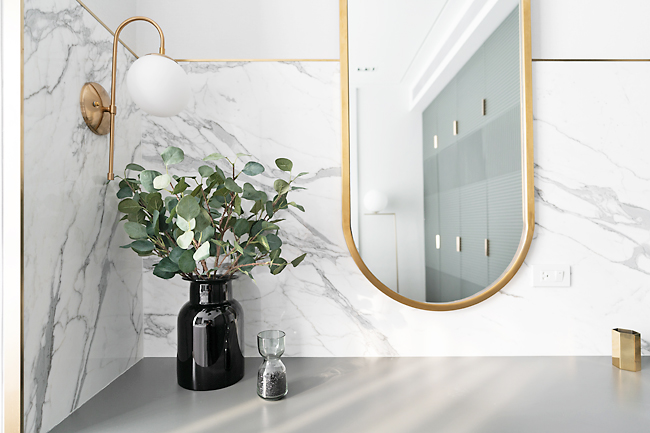 The basic epoxy-acrylic dries clear, which provides a seamless look when two pieces mate closely and is often a good option when small divots need to be filled. But from the pictures you sent, it appears at least part of the crack might be considerably more than a hairline wide. Geronimo recommended tinting the adhesive, using K-Bond Polyester Adhesive Colour Paste. But you might do fine by just getting a bottle of the Buff colour. Mix the tint into the basic adhesive and add the activator only once you are happy with the colour match. The colour will change very little after the activator is added, Geronimo said.

Before you add activator, have a plan for holding the pieces together if you’re dealing with separate pieces. A clamping system works best, but Geronimo said hand pressure alone might suffice, especially if the pieces are fully supported by the cabinet. Whether you’re dealing with separate pieces or simply trying to fill the crack, ensure the surfaces are clean and dry. Rubbing alcohol makes a good cleaner.

Once you mix in the activator, you’ll have five to 15 minutes of working time. If you’re bonding two pieces, spread a thin layer on one piece and press the other piece tightly to it. Clamp, if possible, or keep hand pressure on the joint, but have a helper at the ready, so one of you can scrape off excess adhesive as the mixture begins to harden but is not completely set. Scrape back and forth over the crack with a sharp razor blade held at a right angle to the surface. This will gradually shave off the patch, leaving it level with the stone.

The adhesive should be fully set in 15 to 40 minutes, depending on the temperature, how much activator you used and how much material you mixed. Working when the temperature is below 41 degrees Fahrenheit or adding less than one per cent activator considerably delays hardening.

Instead of tackling the job yourself, you can try again to get a countertop-repair company to assist. A professional shouldn’t be using the patch material for the first time and should know how to clamp pieces while the adhesive cures, if that’s an issue on your job. A pro may also be better at matching the colour of the stone. – The Washington Post