COVID pushed millions worldwide from the middle class to poverty

“#Localcartagenatours. Nobody Does It Better Than the Locals,” the T-shirt on his back promised, although there were hardly any tourists left to look. Hundreds of miles away, American beach towns, chock-full of vaccines, were back in business. But here, the pandemic was only getting worse, evaporating the seas of sightseers in the bougainvillea-lined streets of Old Town.

The stocky 36-year-old sized up the slim pickings and zeroed in on a pale European couple.

He hesitated. He is a Black Colombian, and his market was African Americans. They’d filled his Afro-centric tours exposing the heroes of Colombia’s showcase city as slavers. But that was before the pandemic punched a hole in the developing world’s middle class, sending millions careening back down the social ladders they’d spent lifetimes climbing up.

If history were any guide, it would take a Black man in Latin America far longer to recover. And Mendoza was down deep. In the 15 months since Colombia’s first coronavirus case, he’d been evicted from his office and pulled his seven-year-old out of private school. He’d moved his family out of the city and back to the dirt-road village of his birth. 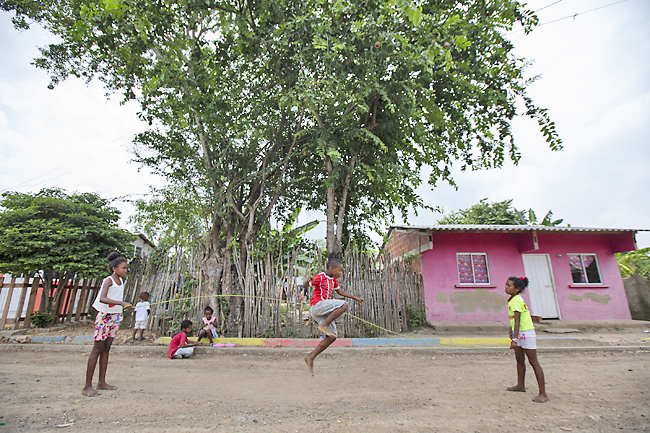 The rent was due in five days and he was still short USD60. A day’s worth of tips before, a king’s ransom today.

Business card out, he approached the Europeans.

“It’s cool. I’m a winner, a builder, a creator,” he said, flashing a broad smile. “Better to laugh than cry. It gets you more clients.”

The pandemic has pushed tens of millions of people worldwide into poverty. Fears are growing that worsening inequality – both within nations and between them – could be one of its longest-lasting effects.

Take Latin America, the region that has sustained the world’s sharpest economic blow.

In the past two decades, the number of people living in poverty in Latin America was almost halved. The commodities boom in the 2000s generated jobs in mining, oil and agriculture. But the middle class – a relative term, for people earning USD13 to USD70 a day – was still populated largely by the ranks of the self-employed, including small entrepreneurs and informal workers.

They were grocers, jewellers, street vendors and tour operators. Recent years of economic stagnation imperiled those gains, but they more or less held on. So much so that two years before the pandemic struck, one of the world’s most unequal regions achieved a milestone: For the first time in history, the middle class became its single largest income group.

For millions, the moment would prove fleeting. Factoring out Brazil, where temporary government aid skewed regional numbers, 12 million Latin Americans tumbled out of the middle class last year, knocking the region from its perch as a middle-class society, according to a World Bank study to be published next month.

The pandemic has exposed the fragility of the region’s lauded poverty-busting years. There is a continuing dearth of formal, salaried jobs. Wealth inequality persists, and tax laws still shield the rich. Safety-net programmes remain limited, particularly for the middle class.

Some countries are already seeing stark inequality worsen because of the pandemic. And marginalised groups – people of colour, women, lower-skilled workers – face some of the steepest roads to recovery.

Colombia, the world’s 13th-most unequal nation before the pandemic struck, offers a snapshot.

In a country of 50 million, the poorest fifth of the population lost 24.6 per cent of their incomes, while the middle shed 15.6 per cent. The richest lost a relatively light 10.1 per cent.

Roughly 1.6 million Colombians fell out of the middle class. One was Mendoza. “I feel like I’m starting from zero,” he said.

Colombia’s 4.7 million Blacks, already statistically poorer than the average Colombian, witnessed the steepest drops in labour income of any ethnic group in the second half of 2020, compared to the same period in 2019, according to Colombian government data. The pandemic’s punch stirred many to action. Hundreds of thousands have taken to the streets in recent weeks to protest rising poverty and inequality. The protesters have disproportionately been people of colour.

Once the outbreak releases its grip on places like Colombia – still months away, at the earliest – the middle class, analysts said, should be poised for a rapid recovery.

But by then, many, like Mendoza, will have burned through life savings, accumulated more debt and lost professional momentum. Their children will have fallen behind in their educations. For those who have sunk back to the bottom, poverty feels like an inescapable chain. It takes a person born poor in Colombia on average 11 generations to break out.

For Afro-Colombians, facing systemic racism and less access to education, health care and the Internet, the chain feels even stronger.

“We’ve lost about a decade on average in terms of poverty gains as a country,” said analyst and adviser on poverty to the Colombian government Roberto Angulo. “But the Black population is going to lose even more than a decade, and be even more poor than before.”

His professional name was the Fisherman of Barú, a nod to a lifetime spent by the sea. Mendoza’s wife liked to joke that he couldn’t cast a line to save his life. What he could do, she’d say with pride, was fish for opportunity.

One day this month he was pounding the cobblestones at noon but had struck out with everyone he’d pitched.

“Excuse me, would you like to know the real Cartagena?” he’d asked the Europeans, enunciating in hard-learned English.

They’d walked on as if he didn’t exist. “It’s this,” he’d said, pointing to his ebony skin.

He moved down Badilla Street now, commiserating with trinket vendors in a blur of bro hugs and fist bumps. Tourism in Cartagena had fallen 90 per cent after the pandemic struck; it was still down by 70 per cent. He breezed past vacant store fronts. More than 400 businesses in Cartagena had closed.

One of them was his.

A few months after tourism crashed, his landlord evicted him from his second-floor office in a mustard-colored colonial building. He’d proudly inaugurated it in 2017. He’d had two employees, now laid off.

He’d beaten the odds to get that far. The son of a security guard and a food worker, he was raised in a dirt-floor shack. Aa a child, he made a few pesos selling necklaces on the beach.

“My grandfather used to call me a marica” – a sissy – “for clinging to my books,” he said. But top marks, a tourism programme and a scholarship at an English-language school had been his ticket out.

By 2018, his website was bringing in business from black American clients for his trademark Afro-centric tours. He’d taken out a bank loan to build his dream: a bed-and-breakfast by the beach. He was clearing USD1,600 a month, enough for a middle-class life. His wife made a few hundred more as a clerk in a hardware store. They’d show up in trash-strewn Puerto Rey, the village of his birth, brimming with gifts.

“They used to call me Santa Claus,” he said.

Now he’d lost his website, unable to pay the taxes on the domain. His motorbike was being held hostage by the USD80 he owed the garage. The bank had called three times this week. He’d sent them to voice mail. “But it’s cool,” he said. His wife had lost her store clerk job in cutbacks, and he was pulling in scraps in Old Town Cartagena. But he’d rented a cafe in Puerto Rey and had saved some cash by moving his family out of the city to a tiny apartment above the joint.

He’d buy stock in Cartagena on credit at 20 per cent interest and jack up the price for sale in Puerto Rey. He cleared maybe USD350 a month. When he fell short on rent, he’d pay what he could and put the rest on account. He’d take chances with small loans.

Hoping for a bigger payday, he’d hired a DJ for the upcoming Sunday. “Now I’m poor again,” he said. “I’ve got to be creative. I’ve got to make it happen. Produce. Not for me – for my family.”