MONTEVIDEO (AFP) – As a second, deadly wave of COVID-19 batters Latin America, images have emerged from country after country of desperate people lining up for days to buy oxygen to ease the suffering of infected loved ones fighting for breath.

As demand soars, prices have skyrocketted and families have had to scrape together their last cents to pay for supplies of the essential gas.

On January 14 alone, a researcher estimates more than 100 people died of asphyxiation at hospitals in Brazil’s northern Amazonas state.

One of them, according to his widow, was Henrique Marques, 52, who ran out of breath in a hospital in Manaus.

“When we learnt that the hospital lacked oxygen and beds we asked for help from the church, but the pastor did not manage to bring the cylinders in time,” 58-year-old Ana Marques recounted.

According to the World Health Organization (WHO), about one in five people with Covid-19 requires oxygen therapy to relieve respiratory distress. 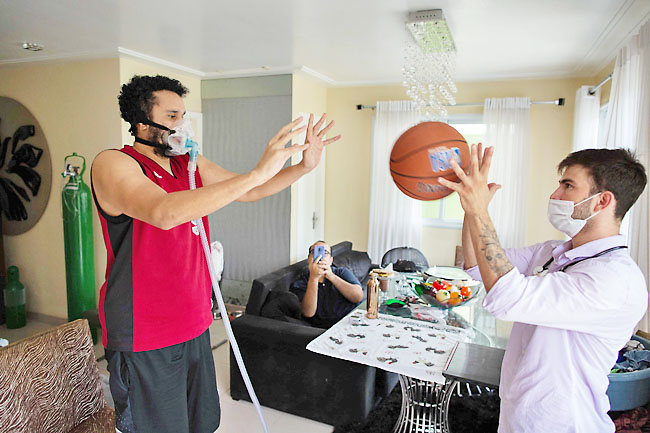 With more 19 million recorded infections to date – likely an undercount, according to experts – this means almost four million people in Latin America have required oxygen therapy since the outbreak began.

Public health NGO PATH, which compiles a “COVID-19 Oxygen Needs Tracker”, said more than half of hospitals in low- and middle-income countries – a category that includes most of Latin America – have an inconsistent supply of medical oxygen, or lack it entirely.

“Countries with less access going into the pandemic are disproportionately impacted by spikes in demand due to Covid-19,” Lisa Smith of PATH told AFP by email.

Access can be thwarted by shortages in everything from money to buy the oxygen to clinics to administer it, electricity to produce it, and navigable roads by which to transport the cylinders, she said.

Brazil and Mexico account for more than half of the region’s deaths, with 228,000 and 162,000 respectively, and rank second and third in terms of mortality worldwide.

Peru is proportionally the hardest hit with 125 deaths per 100,000 of its population of 33 million.

Amazonas state and its capital, Manaus, were particularly assailed by the second wave this year, quickly running out of hospital beds, oxygen and burial space.

By mid-January, daily demand for oxygen in Amazonas was about 76,000 cubic metres (around 20 million US fluid gallons) and supply at a mere 28,200 cubic metres.

In Lima, July Blanco and her brother Juan Carlos were among hundreds to have lined up for days at a time, sleeping outdoors, to obtain an oxygen refill for their ailing father.

They waited patiently with others outside the Criogas factory, famed for keeping its prices stable while other producers hiked theirs by as much as 300 per cent.

“My brother and I take turns… he sleeps here, out in the open, on the grass, so I am the one who has to bring him breakfast, lunch, dinner,” Blanco told AFP on day four of their wait.

Criogas boss Jose Luis Barsallo, nicknamed the “Angel of Oxygen”, has had to bring in police to ensure that profit-seeking vendors are removed from the waiting line.

The price for a 10 cubic-metre tank varies widely in Peru – between USD330 and USD690 – while a cubic metre of oxygen sells for anything between USD5 and USD13.

In Mexico, the authorities said they have not detected any shortage or hoarding of oxygen. However, there has been a 700-per cent increase in demand between 20 December and 20 January, and a shortage of cylinders.

“There is enough product, but not tanks,” Jesus Montano, spokesman for the government’s consumer agency, told AFP.

In impoverished Nicaragua, the price for a tank of oxygen could be as high as USD1,000 or USD1,500, according to Roger Pasquier, president of the Nicaraguan Anesthesiology Association.

“This generated a higher mortality rate because not everyone had the means” to buy at this price, he told AFP.

Sylvain Aldighieri, COVID-19 incident manager for the Pan-American Health Organization, said this week there was no “regional oxygen crisis” in Latin America, but conceded “some countries have been significantly challenged in the last few months”.

The PAHO has distributed more than 600 oxygen concentrators in the region. These, unlike tanks that need refilling, can produce oxygen from a gas supply for as long as they are connected to a power source.