BANGKOK (AP) – A court in military-ruled Myanmar yesterday convicted the country’s ousted leader Aung San Suu Kyi of corruption, sentencing her to seven years in prison in the last of a string of criminal cases against her, a legal official said.

The court’s action leaves her with a total of 33 years to serve in prison following a series of politically tinged prosecutions since the army toppled her elected government in February 2021.

The case that ended yesterday involved five offences under the anti-corruption law and followed earlier convictions on seven other corruption counts, each of which was punishable by up to 15 years in prison and a fine.

All her previous convictions had landed her with a total of 26 years’ imprisonment.

Suu Kyi’s supporters and independent analysts said the numerous charges against her and her allies are an attempt to legitimise the military’s seizure of power while eliminating her from politics before an election it has promised for next year. 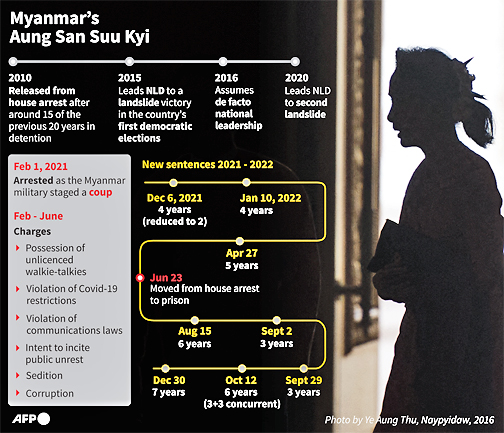 In the five counts of corruption decided yesterday, Suu Kyi was alleged to have abused her position and caused a loss of state funds by neglecting to follow financial regulations in granting permission to Win Myat Aye, a Cabinet member in her former government, to hire, buy and maintain a helicopter.

Suu Kyi was the de facto head of government, holding the title of state counsellor. Win Myint, who was president in her government, was a co-defendant in the same case.

Yesterday’s verdict in the purpose-built courtroom in the main prison on the outskirts of the capital, Naypyitaw, was made known by a legal official who insisted on anonymity for fear of being punished by the authorities. The trial was closed to the media, diplomats and spectators, and her lawyers were barred by a gag order from talking about it.

The legal official said Suu Kyi received sentences of three years for each of four charges, to be served concurrently, and four years for the charge related to the helicopter purchase, for a total of seven years. Win Myint received the same sentences.

The defendants denied all the charges, and her lawyers are expected to appeal in the coming days. The end of the court cases against Suu Kyi, at least for now, raises the possibility that she would be allowed outside visitors, which she has been denied since she was detained.

The military government has repeatedly denied all requests to meet with her, including from the Association of Southeast Asian Nations (ASEAN), which seeks to help mediate an end to the crisis in Myanmar that some United Nations (UN) experts have characterised as a civil war because of the armed opposition to military rule.

The UN announced after its special envoy, Noeleen Heyzer, met in August with head of Myanmar’s military-installed government Senior General Min Aung Hlaing that he “expressed openness to arranging a meeting at the right time” between her and Suu Kyi.

A statement from the military government said, “Depending on the circumstances after the completion of the judiciary process, we will consider how to proceed.”

Suu Kyi is currently being held in a newly constructed separate building in the prison in Naypyitaw, near the courthouse where her trial was held, with three policewomen whose duty is to assist her.

Allowing access to Suu Kyi has been a major demand of the many international critics of Myanmar’s military rulers, who have faced diplomatic and political sanctions for their human rights abuses and suppression of democracy.

State-controlled media reported last year that Win Myat Aye, the figure at the centre of the corruption case that ended yesterday, used the rented helicopter for only 84.95 hours between 2019 and 2021, but paid for a total of 720 flight hours, which resulted in a loss of more than USD3.5 million in funds.

The state-run Global New Light of Myanmar newspaper said he also allegedly failed to follow official procedures in buying the state-owned helicopter, resulting in a further loss of USD11 million.

Win Myat Aye is now Minister of Humanitarian Affairs and Disaster Management in the National Unity Government (NUG) established as a parallel administration by elected legislators who were barred from taking their seats when the military seized power last year. The military has declared NUG to be an outlawed “terrorist organisation”.