A group of 28 people whose parents were exposed to radiation in the August 9, 1945 United States atomic bombing filed a lawsuit in 2017, demanding the government include them as part of its medical support available to the survivors. Two of the plaintiffs who were cancer patients died during the trial.

The Nagasaki District Court said yesterday that a possible hereditary radiation effect cannot be denied, but there is no established scientific consensus and that the government’s exclusion of the plaintiffs from medical support is not unconstitutional.

The court said it is up to the government to decide whether to expand financial support to include second-generation survivors.

The government has maintained that there is no scientific evidence showing hereditary impact of parents’ radiation exposure to their children. 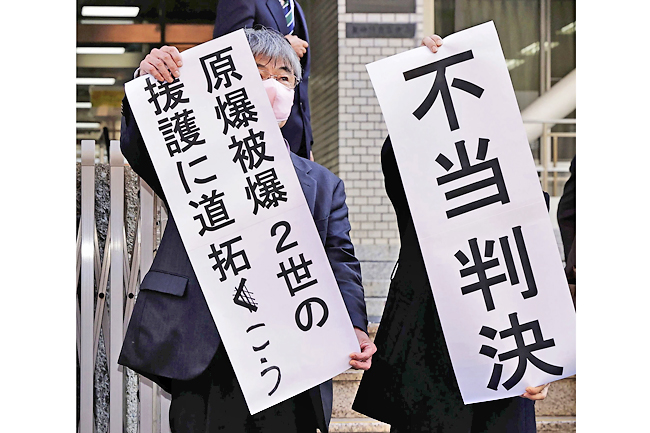 The plaintiffs, aged in their 50s to 70s, sought JPY100,000 (USD730) each from the government in damages, saying their exclusion violated constitutional equality.

Many survivors of the bombings have lasting injuries and illnesses resulting from the explosions and radiation exposure and have faced discrimination in Japan.

Their children, known as hibaku nisei, or second-generation survivors of atomic bombing, said they have constantly worried about possible hereditary effects of radiation from their parents’ exposures, and many have developed various forms of cancer and other health problems. They estimate their numbers at 300,000 to 500,000.

Currently, only the survivors and those who had prenatal exposures who were certified can receive government medical support for their radiation illnesses and cancer checkups. The government started providing free medical checks for their children in 1979 but cancer examinations are not included.

In his statement at the final court session in July, Noboru Sakiyama (AP, pic right), who heads the plaintiffs, said he worried his pancreatic cyst may become cancerous because his mother, who was at a location just seven kilometres from ground zero, died of pancreatic cancer. He also said many of his peers suffered discrimination at school, work and elsewhere, like their parents.