Could Kylian Mbappe really be set to leave PSG?

PARIS (AFP) – Reports emerged this week that Kylian Mbappe wants to leave Paris Saint-Germain (PSG) in the next transfer window, despite the France superstar only signing a new contract with the Qatar-owned club at the end of last season.

AFP Sport looks at just why Mbappe might be unhappy, what PSG are saying, and whether a departure in January is a possibility.

The story emerged on Tuesday, with Spanish sports daily Marca and several French media reporting that Mbappe wants to leave PSG as soon as possible. Many of the reports in France claimed that the 23-year-old feels “betrayed” by the club, disappointed that promises made to him when he signed his new contract in May have not been kept.

It is true that PSG did not make all the signings they wanted in the close season, with most of the focus on their failure to bring in a central defender.

Yet Mbappe was apparently expecting a new centre-forward to arrive as well.

Robert Lewandowski was among the players linked with a move to Paris before eventually choosing Barcelona. The French champions also missed out on Italy striker Gianluca Scamacca, who went to West Ham United instead. 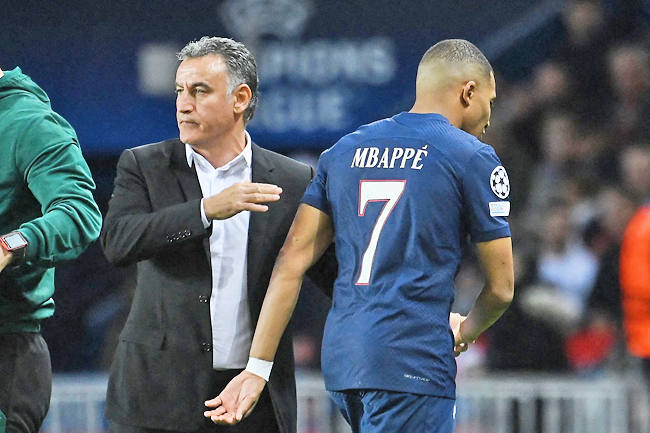 Mbappe, who scored 39 goals last season, got his 12th of this campaign in Tuesday’s 1-1 Champions League draw against Benfica. In Paris he plays alongside Neymar and Lionel Messi in an all-star front three, but he has hinted that he is not happy with the position he has been asked to play by new coach Christophe Galtier.

“I play differently here. I am asked to do different things than with my club. I have much more freedom,” Mbappe said after scoring for France against Austria last month.

Galtier himself later admitted that the World Cup winner is “more restricted” at his club, and that appears to be enough for the player to be having second thoughts about his decision to sign a new contract just a few months ago.

Luis Campos, the Portuguese recruitment guru who was appointed to the role of football advisor by PSG just after Mbappe signed his new deal, responded to the reports by insisting on Tuesday that Mbappe “has never spoken to me about leaving in January” when asked by broadcaster Canal Plus.

Meanwhile, coach Galtier insisted he was not aware that Mbappe might want to leave the Parc des Princes this season. “I know nothing,” Galtier said. “All I know is that a rumour became a story and then that almost became a declaration.”

But the rumour was, according to several sources, started by the entourage of the player in order to put pressure on PSG because their number seven feels let down by the club.

“He is concentrated on the club and he is happy here,” Achraf Hakimi, an ally of Mbappe’s in the Paris dressing room, told journalists.