Could Itaewon tragedy have been prevented?

ANN/KOREA HERALD – With the nation in shock with the overnight tragedy from the crowd surge at Halloween festivities in Itaewon, questions surfaced about the lack of safety control and crowd management over the event.

The tragedy happened as a large number of people were packed at a narrow alley that connects Exit 1 of Itaewon Station with the World Food Street behind the Hamilton Hotel.

Witnesses observed people pushing each other as they tried to go up or down the crowded alley. The alley is 45 metres long and 3.2 metres wide, and slopes downward toward the main road and the station.

As authorities look into how and why the tragedy unfolded, some said the catastrophe could have been prevented, or at least partly controlled.

The Halloween party in Itaewon has been a long-publicised event as the central Seoul area has functioned as its main venue for years. Every year, crowds dressed in costumes have gathered for the Halloween festivities.

It was anticipated that a large crowd would gather in the area as it was the first Halloween in three years to be held without pandemic restrictions. 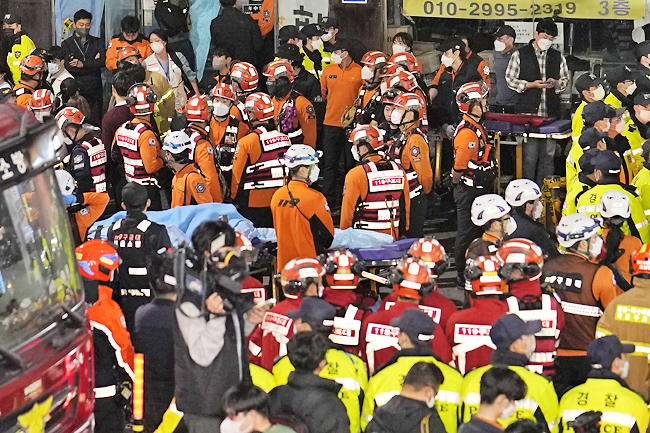 Last year, even in the midst of the ongoing pandemic, crowds gathered at Itaewon to celebrate the occasion, drawing criticism about the possible risk of virus transmission.

While questions were raised about the lack of police crowd control, Interior Minister Lee Sang-min claimed the tragedy could not have been prevented by deploying more police officers.

“This was not a gathering of a large size that caused special concern” or a size that was different from previous years, Lee said at a briefing held at the governmental complex in Seoul on Sunday.

While admitting that a large number of police were deployed in Gwanghwamun due to several protests, Lee said the Itaewon crush did not seem to be “an incident that could have been prevented by deploying more police or fire officers”. Experts pointed out that, as the event was held without an organiser, there was reduced scope for holding people responsible.

“(For other type of events) the organisers could be punished under the law (for mismanagement), but it is difficult for someone to take the blame for the event as this was a voluntary event without an organiser,” Professor at the Department of Police and Fire Administration at U1 University Yeom Gun-woong said on a YTN radio show on Sunday morning.

“When the rescue workers arrived on the scene, the casualties were more severe than expected. Authorities had to mobilise the ambulances and rescue workers across the greater Seoul area,” Yeom said.

Emergency vehicles and rescue workers could not easily approach the site due to traffic congestion and crowding even though the tragedy happened just 100 metres from the nearest fire station.

With nearly 300 victims, there were not enough people to cope with the tragedy, either.

“District events held by local governments or institutions have to have safety plans and measures if more than 1,000 people are expected to participate.

“But this was a district event without a specific organiser, lacking the safety control function,” Professor Lee Young-ju from the Department of Fire and Disaster at the University of Seoul told broad-caster YTN.