She will now play 27th-seeded Danielle Collins for a place in the semis after the American outlasted Elise Mertens 4-6, 6-4, 6-4 in a near three-hour epic.

The breakthrough has been a long time coming for Cornet, who made her Grand Slam debut at the French Open in 2005 but had never been past the fourth round before.

Thailand’s Tamarine Tanasugarn previously held the record for most appearances before reaching a quarter-final at this level, achieving the feat on her 45th try at Wimbledon in 2008.

“After 16 years on the tour, I never give up. Today I realised this goal that was very important to me for a while,” said Cornet, who upset world number three Garbine Muguruza in round two. “After beating a few big names, Muguruza, today Halep, they are all players that I admire a lot. I don’t know what happened in the past, and really, honestly, right now I don’t care.” 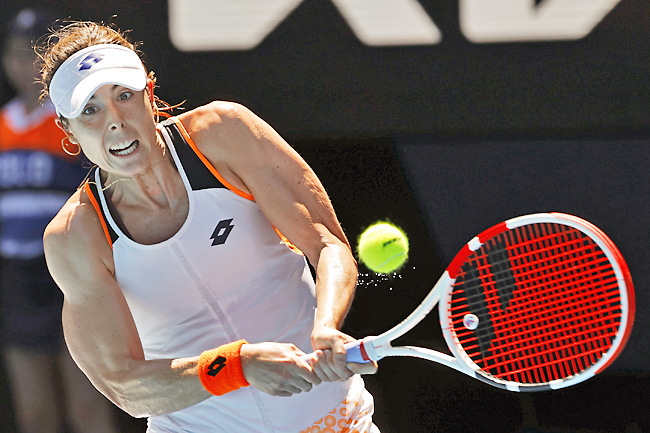 Asked what her goals were now after reaching a first quarter-final, Cornet replied, “Going further.”

“I’m still ambitious. I just have to soak it in, you know, take time to appreciate the moment and be proud of what I did today.

“But definitely from tomorrow I will have to think about my next match and how I can go farther in the tournament.

“The sky’s the limit. For the first time of my life, I really believe I can go till the end.”

The pair traded breaks in an attritional opening set before Cornet sealed it in 48 minutes that took their toll.

She needed an ice bag on her head, drank as much fluid as she could at the changeover and her hand appeared to be shaking.

Halep was also distressed in the heat, constantly bending over to catch her breath, but somehow persevered to take the second set as Cornet berated the umpire, “It’s insane, it’s inhuman”.