Corn chowder with miso and salmon is an enchanting meal

THE WASHINGTON POST – The alluring duo of miso and a sweet vegetable has me under its spell. I can’t resist stirring a touch of the fermented bean paste into a pan of sautéed green peas, for example, or whisking a spoonful into a dressing for roasted sweet potatoes.

The miso rounds out the vegetables’ sweetness with its savoury, salty funk, turning a simple side into an excitingly complex flavour experience.

What better way to make the most of the tail-end of summer corn season? Go ahead, stir a tablespoon or so of miso into a skillet of fresh corn next time you are cooking it. You’ll quickly see why I’m so enamoured.

CORN CHOWDER WITH MISO AND SALMON

Here I ran with the unbeatable corn-miso combination, turning it into a chowder with tender bites of salmon, making it a satisfying meal-in-a-bowl. 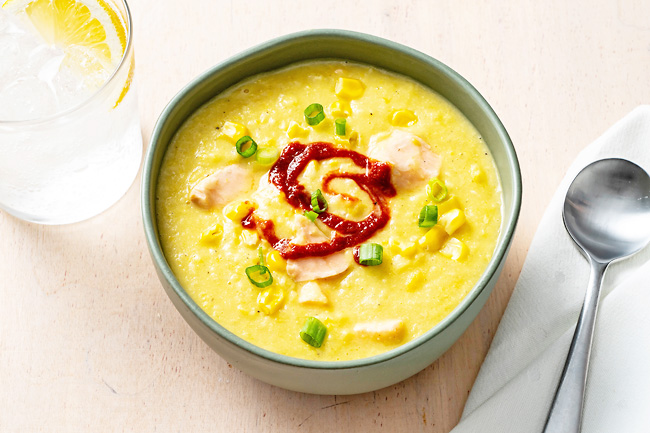 Start by sautéing onion, bell pepper, celery and potato in a soup pot, then add a quart of broth (chicken or vegetable) and simmer to cook the potato, which thickens the soup once it’s pureed. (Use a yellow bell pepper to keep the soup’s colour gorgeously golden).

Then add most of the corn – just-picked fresh is best, but frozen will work, too – and cook it until tender, before pureeing the mixture into a smooth and creamy soup.

The final stage, where you stir in the miso and simmer the salmon as well as the rest of the corn kernels, sets you up for an unforgettable meal.

Served topped with a generous spray of fresh scallions and a drizzle of hot sauce, it’s a hearty chowder with a unique flavour that’s utterly enchanting.

In a medium soup pot over medium heat, heat the oil until shimmering. Add the onion, potato, pepper, celery, salt and pepper and cook, stirring occasionally, until the onion is translucent, about five minutes. Add the broth, bring to a boil, then reduce the heat to medium-low. Cover and simmer until the potato is tender, about five minutes.

Add all but the two cups of reserved corn, and return to a boil. Reduce the heat to medium-low and simmer, covered, until the corn is tender. Use an immersion blender to blend until smooth, or allow the mixture to cool, about 10 minutes, and then transfer to a regular blender and blend in batches.

Return the pureed soup to the pot and bring to a boil over medium-high heat. Stir in the miso, the reserved two cups of corn kernels and the salmon and simmer, uncovered, over medium heat until the corn is tender and the salmon is no longer translucent, three to five minutes. Taste, and season with additional salt, if needed.