SAO PAULO (AP) – South American soccer body CONMEBOL said on Saturday it is upgrading the Maracanã stadium pitch for the Copa America final amid criticism of other fields of play in the tournament. The decider will be on July 10.

Weeks ago, after Brazil became last-minute hosts of Copa America, organisers scheduled seven matches for the Nilton Santos stadium in Rio precisely because the pitch at the Maracana was worn out. But criticism has only grown since the start of the tournament.

The Arena Pantanal in Cuiaba, which will hold one more group stage match, has also been targetted for irregular patches and sinking areas on the pitch.

Brazil’s coach Tite recently joined Neymar (AP; pic below), Lionel Messi and others who attacked the organisation for the poor pitch of the Nilton Santos, which was used for track and field in the 2016 Olympics and is regularly used by local club Botafogo, currently playing in the country’s second division.

After Thursday’s 2-1 win against Colombia, Tite said the pitch of the arena was “unacceptable”. CONMEBOL fined him USD5,000 the next day for criticising the organisation of the tournament, which was transferred to Brazil after Colombia and Argentina withdrew from hosting due to the COVID-19 pandemic.

On Saturday, Tite again raised doubts about the Maracana pitch for the decider.

“If I talk about the bad pitch (of the Nilton Santos) I will be fined,” Tite said in a press conference ahead of Sunday’s Group B match against Ecuador in Goiania. “It will happen again. The Maracana will not be good until the final. The time is too little (to improve). You can write that.” 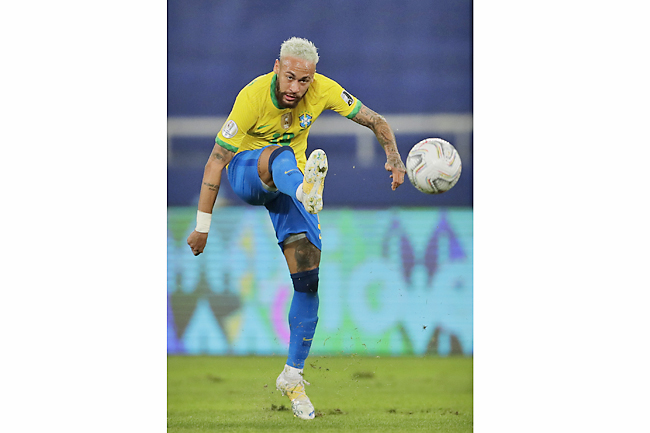 Hours after Tite’s press conference CONMEBOL published a video showing improvements it is making on half of the Maracana’s pitch. Agronomist Maristela Kuhn told the football body’s objective is “good results in very few days”.

“This is great because the pitch will be only used for one (Copa America) match. And all this service stays for the clubs (playing at the Maracana),” she said.

After Brazil’s 4-0 win against Peru on June 17, Neymar went to Instagram and said: “Celebrating yesterday’s goal on the ‘beautiful’ pitch of the Engenhao. Please, fix the pitch,” he added.

Peruvian goalkeeper Pedro Gallese agreed. “The pitch was in terrible conditions. You couldn’t take a goal kick. The ball sinks,” he said.

Three days earlier, Messi said “the pitch did not help much” after Argentina’s 1-1 draw with Chile in the same stadium. His coach, Lionel Scaloni, was even harsher: “It is a pitch for another sport, not to play soccer.” No major improvements were made since.

Brazilian media reported on Saturday that the country’s soccer federation is trying to convince CONMEBOL to move its quarterfinals match to the Arena Pantanal — the Selecao has already advanced as top of Group B, with one match in hand.