THE WASHINGTON POST – Allonda Hawkins said the way her children are expected to do math is “100 per cent different” from the way she learnt.

“There are terms that I’ve never heard before, like arrays. It’s very foreign to me and it’s hard to teach,” said the 38-year-old real estate agent from Winston-Salem, North Carolina.

The mother of four, aged five to 11, often turns to YouTube for explanations and recruits her fifth-grader to help the younger children. Hawkins said she’s catching on more now that she can eavesdrop on her childs’ online classes, but she still is frustrated that she doesn’t have more guidance.

Parents across the country are getting an up-close look at math instruction – and, like Hawkins, they don’t always know what to make of it. But with about half of American childs still learning at home, it’s time for parents to get up to speed.

Experts said it’s important for parents to know the basic ideas behind the current methods if they are going to help their children. Positive parental help could make the difference between students being excited about math or falling behind during the pandemic, said Jennifer Bay-Williams, co-author of Elementary and Middle School Mathematics: Teaching Developmentally and professor of education at the University of Louisville.

The new approach is actually not all that new. It’s grounded in research going back more than 30 years and is reflected in the Common Core State Standards, which are used in 41 states. (And most states now follow standards with the same principles, even if they don’t call them Common Core). Instead of memorising procedures to solve problems, childs are asked to think through various ways to arrive at an answer and then explain their strategies. While some parents believe these methods are just a more complicated way of teaching math, they are designed to promote a deeper understanding of the subject and help students make lasting connections. 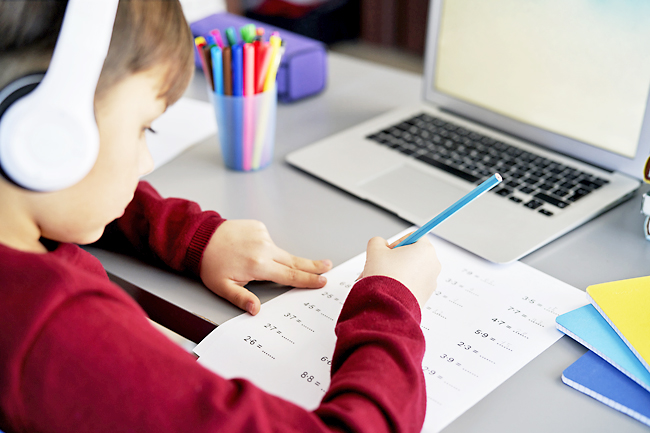 “There’s not just one way to solve a problem,” said President of the Association of Mathematics Teacher Educators and associate professor of elementary education at Auburn University in Alabama Megan Burton. To fully grasp deeper mathematical concepts, “students need to think about what makes sense and build on what they learn”.

Making sense of problems and persevering in solving them is the top priority, said Bay-Williams.

When watching a child struggle to complete a maths problem, “it’s very tempting for a parent to want to get in there and rescue the child, which doesn’t always help in the long run”, Burton said. Research is clear that allowing childs to experience a “productive struggle” – wrestling with an idea or pondering a new concept – pays off in children’s
math ability.

Students are asked to use the idea that numbers can be represented differently when problem-solving, too. Take four x 27. Traditionally, a student would line up the numbers vertically, multiply four x seven, carry the two, then multiply. Well, most adults remember the procedure. (The answer is 108.)

Now, children are encouraged to think: Wait a minute, that’s really just four x 25, which is 100, plus four x two, which is eight. If I add the two products together, I get 108.

“That works pretty slick and makes more sense,” said Professor DeAnn Huinker of Mathematics Education at the University of Wisconsin at Milwaukee and Director of the university’s Center for Mathematics and Science Education Research. “I can do that in my head, write down a couple of partial products and add it up.”

Huinker advocates redefining math success, “It’s not being able to tell me the answer to three times five within a heartbeat. Rather, being successful means: ‘I understand what three times five is’.”

For some students, it might help to use a number line to see the relationship between numbers. If a student is given the problem 12 minus seven, the student can start at seven, jump to 10 (that’s three), and then jump to 12 (that’s two), so the difference is three plus two, or five. Ten in this example is known as a “benchmark number”, said Huinker, and students are encouraged to use benchmarks to move toward more efficient and meaningful computation strategies.

An array, which flummoxed Hawkins, is a model that students can use to master multiplication. It’s essentially a grid. Students can plot out five x six by colouring in five rows of six or six columns of five. Count the total number of squares and you’ve got the answer: 30. Break the grid apart into sections, and you can see three sets of 10. The visual representation can also help a child understand area and measurement and can plant the seed for connections that will help in later math.

In China Grove, North Carolina, Millbridge Elementary School hosted a webinar last fall for teachers to explain math expectations to parents and tamp down pressure for perfection with homework.

“We honour and value mistakes, because mistakes are how we learn,” said Abby Covington, a mathematical instructional coach at the school.

In time, students will learn to do the traditional approaches to solving problems their parents were taught, but Covington said the idea is to build a proper foundation, “I tell parents we are going to get there. . . that’s our ultimate goal, we’re just not in a race.”

To help demonstrate the value of the new flexible approach, Mathew Felton-Koestler, associate professor in the department of teacher education at Ohio University, produces videos for parents such as What’s Wrong With Carrying the One?

“People worry that if we are focussed on these different strategies, children aren’t going to be good at doing computations,” Felton-Koestler said. “That doesn’t turn out to be true. They end up being just as good – and much better at higher-order type tasks.”

Some parents of older children are finally seeing the long-term benefits of all that early focus on how to think about math. Despite having an MBA, Michelle Majdoch, 46, of Coral Springs, Florida, said she was initially confused by her childrens’ math homework with the story problems and drawing to show their work.

But now that her children are in fourth, fifth, 10th and 12th grades, she gets it. Having to learn three ways to do a problem in the early grades made each of her childs discover the methods that made the most sense to them. These days, her high school daughters are doing well in Algebra 2 and pre-calculus.

Michele Alley, who has two elementary-schoolers, isn’t there yet. She and her older child, Cora, who is attending third grade from a spare bedroom in the family’s home in Monticello, Kentucky, often disagree about how to do math homework.

If it’s something Cora understands, she follows her teacher’s directions. But if her daughter gets stuck, Alley said, she doesn’t know how to help other than to demonstrate the way she learned it in the 1990s – working through the problem by writing out the equation on paper.

In Alley’s district, Bell Elementary hosts maths nights for families twice a year to help bridge the home-school divide, and in October pivoted to a drive-through event on a Saturday morning. It drew 300 people, said Jamie Reagan, a first-grade maths intervention teacher at Bell. Teachers gave out bags with maths games and information on maths standards in “layman’s terms”, said Reagan.

Reagan also regularly provides math packets with cards, counters and other materials for her students.

Still, teachers here expect many students will likely not meet grade-level expectations when they are assessed later this spring.

Meanwhile, parents can help by pointing out math in daily life.

Bay-Williams, the author of a book on teaching maths to children, said parents should trust their intuition about what ends up being important this year.

“Take a deep breath,” she advised parents. “Children are resilient, they are learning things at home… that are going to serve them in other ways.”