WASHINGTON (AP) – Butter-poached Maine lobster, beef with shallot marmalade and an American cheese trio will be served when French President Emmanuel Macron takes his seat as the guest of honour at a red-white-and-blue themed White House state dinner, the first for United States (US) President Joe Biden.

Everything from the menu to the entertainment to the table settings and other touches for the glitzy dinner were designed by the White House – and First Lady Jill Biden – to highlight the ties that bind America and its oldest ally France.

A state dinner is a high diplomatic honour that the US reserves for its closest allies.

“The design of this dinner was inspired by the shared colours of our flags, red white and blue, and our common values, liberty and democracy, equality and fellowship,” Biden said. “These form the bedrock upon which our enduring friendship was built.”

The first lady said she was handling the dinner the way that her mother handled family dinners when she was growing up. Her mother brought out the china, fresh flowers and lit candles “even if we were only having fish sticks from the freezer”.

“I learnt that setting a table can be an act of love,” she said, before journalists were permitted to see the tablescapes for the dinner, which is part of a broader state visit to the US by Macron and his wife Brigitte. Macron landed in the US on Tuesday. 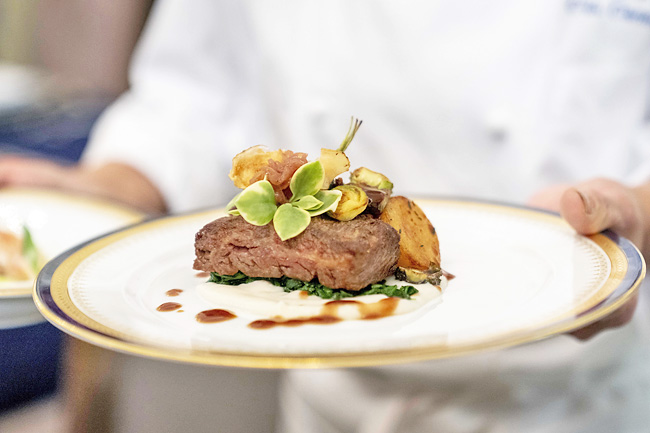 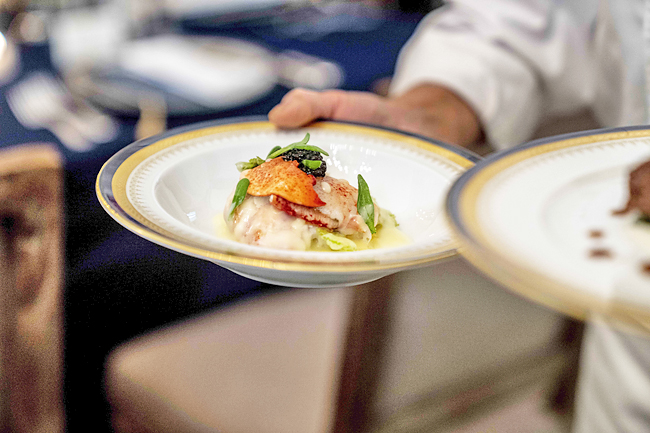 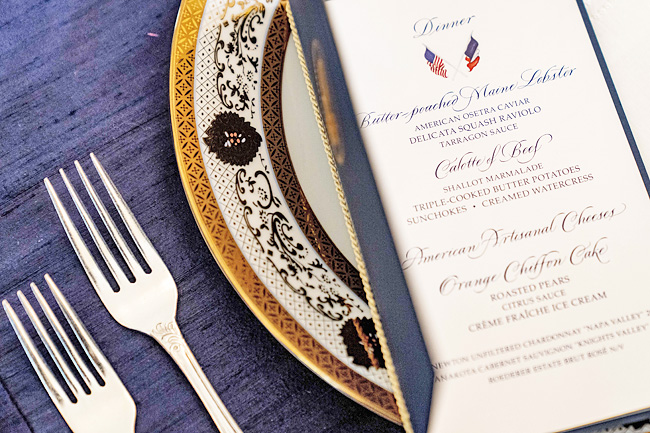 Biden said the first White House state dinner since 2019 will be “an expression of welcome and friendship, a way to connect through a language that transcends words”. She did not take questions from reporters and left the preview room after her brief remarks.

White House social secretary Carlos Elizondo, who has worked for the Bidens for over a decade, said “making people feel comfortable and at home” matters most to the couple.

The glitzy, black-tie dinner party will be held in a heated pavilion on the South Lawn with an expected 300 or so guests. They will be seated at a mix of square and rectangular tables, covered with dark blue silk cloths and decorated with red candles and arrangements of red, white and blue flowers, including roses and irises, the official flower of France.

China from the White House collection will not be used since it is not allowed outside of the executive mansion. Guests will dine on outside tableware. An image of the Statue of Liberty, a gift to the US from France in the 1800s, will be the backdrop for toasts by the presidents.

White House executive chef Cristeta Comerford reserved a special a shout-out for Maine’s lobster workers. “They had to ship 200 live lobsters to us yesterday morning,” she said.

Oceana, an international advocacy group focussed on ocean conservation, objected to the use of Maine lobster, which recently was declared unsustainable by the Monterey Bay Aquarium’s Seafood Watch and the Marine Stewardship Council. The sustainability organisations cited concerns about risks to rare North Atlantic right whales from fishing gear.

Entanglement in gear is one of the biggest threats to the whales. Dinner guests, who typically are supporters and friends of both presidents, government officials, business people and some celebrities, will have the added bonus of arriving at a White House that has been decked out for the holidays. Trolley cars will ride them down to the see-through pavilion on the South Lawn.

Music will be provided by Jon Batiste, a Grammy Award-winning New Orleans native who most recently was bandleader and musical director of The Late Show with Stephen Colbert.

Joining Batiste will be his father Michael Batiste, the US Marine Band and the Army and Air Force Strolling Strings.

The event was produced with help from Fete, an event planning company based in New York City.

Jill Biden recalled that, when she flew to Japan to support Team USA in the Olympics, she ended up cheering alongside Macron during a three-on-three basketball game. Although they were rooting for opposing teams, “there was a comradery that we shared”, she said.

With the state dinner, she said, “Our hope is that the end result will be a night that balances the beauty of our friendship with a seriousness of purpose, and we hope that French citizens everywhere feel the warmth of our welcome.”

On Wednesday night, the Bidens and the Macrons dined at Fiola Mare, an Italian seafood restaurant on the Georgetown waterfront. They spent about two hours at the restaurant before heading their separate ways.

The state dinner, the first in three years, largely due to the COVID-19 pandemic, will not be a new experience for Macron. The French president was invited to the US on a state visit by then-President Donald Trump in 2018.

Trump and his wife Melania took Macron and his wife on a helicopter ride over Washington – a city designed by Frenchman Pierre L’Enfant – and the Potomac River to Mount Vernon, the estate of George Washington, America’s first president. Macron was also recognised at a state dinner.

The first state dinner of a new administration always attracts a lot of attention and sets the bar for how the president and first lady approach entertaining, said Anita McBride, who worked for three presidents and was chief of staff to Laura Bush when she was first lady.

“In terms of the public, most visible event that any White House or any president and first lady could have entertaining on the global stage that is the White House, this is it,” McBride said.